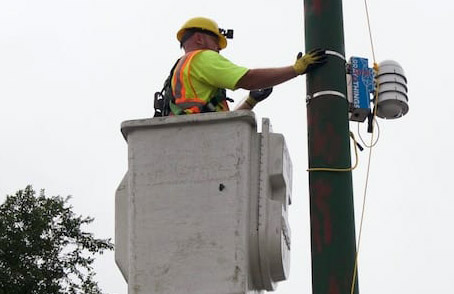 
Each node in the Array of Things was equipped with an Nvidia graphics processing unit (or GPU) to perform computations on images out in the field and sent only processed data along to the network—a form of edge computing. As an added privacy safeguard, the nodes are designed to be installed temporarily. “I would rather not see edge computing blanketed across the city, where everywhere you walk there’s a camera that’s analyzing what you’re doing,” Catlett says. “That to me is more dystopian than I’d like to see. But I do think that these edge devices have a place for diagnosis. You drop that capability in for a purpose, and then you pull it out.”

Between 2016 and 2019, the team attached 140 AoT nodes to Chicago streetlights. In a participatory process, the team at Argonne and local universities worked with everyday Chicagoans and city departments to decide where to place the sensors.

Dozens of studies have since used the sensor data. The nodes have been used to assess the safety of at-grade rail crossings, monitor pedestrian crosswalk usage, and detect flooding along the Chicago River. Kathleen Cagney, a collaborator on the project who directs the Institute for Social Research at the University of Michigan, used environmental data from the sensors for a study on public health, finding higher asthma rates in places where sensors detected more air pollution.

Catlett’s team has since taken on lower-tech projects. Last year, for example, he and his colleagues partnered with Microsoft Research to install 115 low-cost solar-powered air quality sensors on bus shelters across the city. The resulting data showed pollution hot spots near industrial corridors on Chicago’s South and West Sides in unprecedentedly high resolution. Environmental and community groups are now pressuring the city to make policy changes. The team plans to expand to thousands of air quality nodes in coming years.

The Array of Things is also expanding beyond Chicago through a project called SAGE. Unlike other urban sensing systems, which tend to be proprietary, SAGE allows anyone to write software for its nodes, which contain high-resolution hyperspectral cameras, lidar, and audio recorders.

Catlett says the team is now entering its deployment phase. By the end of the year, it plans to install 50 of the $10,000 nodes in Chicago, replacing the earlier-generation Array of Things nodes. Several dozen have already been deployed across Southern California to detect wildfires and on towers nationwide to analyze weather and climate change. The National Science Foundation wants 80, one for each of their National Ecological Observatory Network towers. Oregon wants 100 to help detect earthquakes. The Australian science agency CSIRO put in an order. The library of open-source applications, which is available on GitHub, is growing constantly and includes programs for identifying birds by their songs and classifying funnel clouds from images.

The “fitness tracker for the city” has gone global—just in time to study our changing world.

Christian Elliott is a freelance science journalist based in Chicago, Illinois.