A College’s Explosive Online Growth Drew Scrutiny. Now the Feds Are Stepping In. 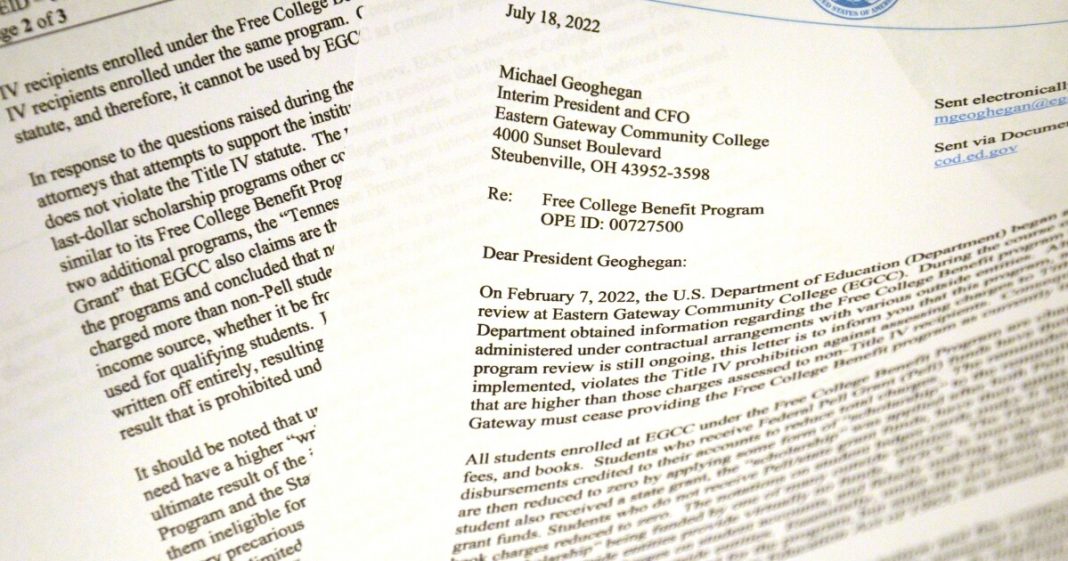 In a blistering three-page letter sent to Eastern Gateway Community College this week, federal education officials ordered an immediate halt to the program “as currently implemented.”

The core problem: The college, federal officials say, used Pell Grant and state financial-aid dollars from students to finance its “free” college offerings, but it improperly waived all tuition costs for students who didn’t qualify for financial aid.

In essence, the students eligible for federal and state aid were footing the bill for everyone, because the college collected money only from them.

“Students who do not receive Pell/state grant funds, have their entire tuition, fee and book charges reduced to zero,” wrote Jeremy Early, a division chief with the Education Department, in a letter sent Monday to the college.

College officials could not be reached for comment Wednesday afternoon. A lawyer for the company that helped run the EGCC program, Student Resource Center, did not immediately respond to email or voice-mail messages from The Chronicle.

In 2015 the college, located in eastern Ohio, enrolled roughly 3,000 students. By 2020, its student headcount had skyrocketed to more than 40,000 students, and most were from the “free” online program. Students in the program could pursue degrees in such fields as accounting, criminal justice, health-care administration, and teacher education.

Many of those students were from outside of Ohio. In employee meetings, the college’s leaders boasted about their fast-growing student body.

But the heavy scrutiny the program is now under could threaten the college’s survival. Eastern Gateway Community College has emerged as a cautionary tale of what can happen when colleges join with for-profit “online program management” companies to expand online offerings.

The college and its for-profit partner, Student Resource Center, are now battling each other in court. Each side accuses the other of violating their agreement.

The Education Department’s letter notes that lawyers for EGCC argued to the federal government that the execution of “free college” at the Ohio institution was being handled similarly to free-college programs in Tennessee and California.

“All programs cited by EGCC are funded by an actual income source, whether it be from the institution’s Foundation or the State, and those funds are used for qualifying students,” the department wrote. “In none of the programs are charges for non-Title IV students written off entirely, resulting in Title IV students being charged and non-Title IV students not, a result that is prohibited under the Title IV Statute.”

The department began a program review of EGCC’s free-college program in February. Three months earlier, the college’s accreditor had placed the institution on probation.

In making that decision, the accreditor, the Higher Learning Commission, faulted Eastern Gateway for unchecked growth — and weak academic standards.

“The institution presented no evidence to support that the present business model provides a high-quality educational experience for students,” the accreditor wrote. “Concerns have been raised about faculty and staff hiring and development; the number of full-time faculty for several academic programs; lead faculty to adjunct faculty ratios; student dissatisfaction with the quality of advising and engagement with adjunct faculty; lack of ongoing, consistent review of learning outcomes; and low long-term completion rates.”