A University Asked Professors to Help Quash a Grad-Student Strike. Hundreds Have Refused. 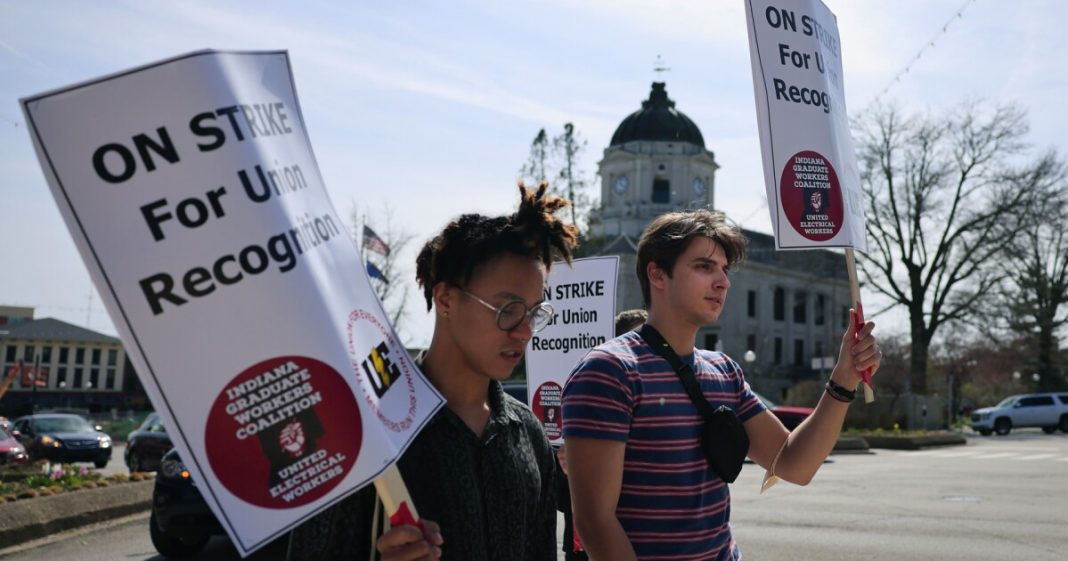 
s graduate students at Indiana University at Bloomington moved toward a strike over the past week, university leaders called on faculty members to hold the students accountable.

“We cannot stay neutral in this moment,” wrote Provost Rahul Shrivastav in an email to faculty members last week. The provost’s email spelled out the consequences that graduate students could face for refusing to teach, including being fired and losing their stipend, health insurance, and other benefits.

With the graduate students’ work stoppage slated to start Wednesday, university officials sent another email to department leaders on Tuesday, reminding them of their responsibility to ensure that student instructors “fulfill their assigned duties.”

But many professors have effectively refused to comply. More than 400 of the university’s 2,000 faculty members, as well as two-dozen departments and programs, have signed a neutrality pledge, promising not to punish any graduate students who choose to participate in the strike.

The strike comes as a last resort for the Indiana Graduate Workers Coalition, which is affiliated with the United Electrical Workers, after trying unsuccessfully for three years to get administrators to work with them, said Sam Smucker, a Ph.D. student and union organizer.

“Now what you have is the provost really bullying departments into undermining the strike, threatening graduate employees, dividing the departments against each other in this process,” Smucker said. “It’s ugly what they’re doing.”

Chuck Carney, a university spokesperson, said the strike is troubling as it comes after Shrivastav, who just recently became provost, and other academic leaders engaged with graduate students at several listening sessions over the past month and a half. Carney said the university recently increased graduate students’ minimum stipends and gave all student instructors 5-percent raises.

“We are deeply disappointed that a minority of our more than 10,000 graduate students, and 2,500 student academic appointees, have decided to engage in a strike which specifically targets undergraduate instruction,” Carney wrote in an email to The Chronicle.

he university’s Tuesday email to department leaders, shared with The Chronicle, outlined how departments should deal with graduate students who participate in the strike, and directed them to find “alternative arrangements” to make sure all their classes would still be taught.

The university won’t approve any graduate students’ academic appointments for summer and fall until there’s evidence that they “have satisfactorily met their course responsibilities for spring semester,” the message said.

But Ben Robinson, chair of the Germanic-studies department and president of Bloomington’s American Association of University Professors chapter, said administrators’ approach of having faculty members discipline the graduate students is not the solution.

“It’s clear they’re not resolving the key problem, which is if [graduate students] go on strike, a key portion of the labor that makes the university run will not be at the job,” Robinson said.

He added: “Essentially what it does is it forces us, meaning faculty, to choose between our ethical convictions and our professional obligations. … The only thing it seems to do is humiliate faculty by asking us to bear the burden of a strike they’ve caused by not negotiating.”

Maria Bucur-Deckard, a professor of history and gender studies, said it’s important for university leaders to work with faculty members, instead of sending out emails that do not clarify what exactly they are supposed to be doing.

University officials have only met with the graduate-student coalition once and refuse to hold a union election, even after the group collected 1,600 signed union cards, representing a majority of the university’s 2,500 graduate employees, said Smucker, the Ph.D. student.

While Indiana leaders have held listening sessions, Smucker said, they haven’t answered a key question: Why won’t the university recognize the union?

In his email to faculty members last week, Shrivastav said that the university’s previous two provosts had responded to the coalition at length. Because Indiana is a right-to-work state, he wrote, the university has no legal obligation to work with a potential graduate-student union.

Shrivastav’s message also emphasized that a work stoppage could delay grades and “especially impact our 6,000-plus low-income students who depend on federal Pell Grants for enrollment.”