After a Decade, Purdue’s Mitch Daniels Calls It Quits 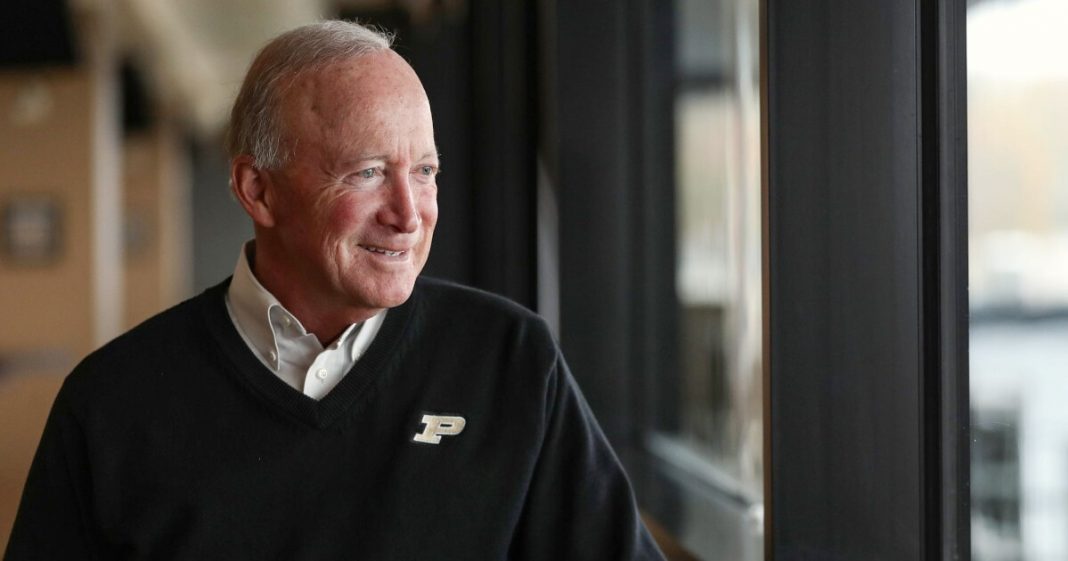 
Mitchell E. Daniels Jr., the president of Purdue University, announced on Friday that he would step down at the end of the calendar year.

The news is not entirely surprising, given that Daniels has led the university for a decade and that a growing number of college presidents have chosen this year to quit. The pandemic, political and economic stresses, and public dissatisfaction with higher education have taken a toll on higher-education executives. On Wednesday, Harvard University’s president, Lawrence S. Bacow, announced his resignation after just four years in office.

Since the beginning of his tenure, Daniels, a former Republican governor of Indiana and leading adviser to two U.S. presidents, has sought to put a moderately conservative stamp on Purdue’s administration.

For that reason, Daniels’s list of accomplishments includes some items that might not have been possible, or even desirable, for many other college leaders. At the top of that list is a tuition freeze that has remained in place for 11 years and will continue through the 2022-23 academic year.

That move alone made Daniels the darling of conservative editorial boards and think tanks across the country, but it requires the institution to seek operating revenue from other sources in order to keep up with increased costs and inflation.

In the fall of 2020, when college officials across the country agonized over reopening their campuses in the midst of the pandemic, Daniels was outspoken in declaring that Purdue had a duty to bring students back to campus. The decision raised concerns among faculty members and some health officials but was popular with students and helped spare the university from layoffs.

Other initiatives have been far less popular on campus, including the purchase of the for-profit Kaplan University, which was rebranded as Purdue University Global. The resulting online institution was meant to provide courses to adult students and be competitive with Southern New Hampshire University and Western Governors University. Critics said that the deal was not transparent and that the new online college had underperformed financially. The venture broke even for the first time in 2021, according to Phil Hill, an education consultant.

More recently, an income-share agreement, championed by Daniels, has raised questions about whether investors and the university’s nonprofit foundation are profiting unfairly at the expense of students. The income-share program provides tuition assistance to students in return for a share of their future earnings. Some students say they did not fully understand that they might have to pay back as much as 250 percent of what they had received in aid.

Indeed, Daniels’s greatest accomplishment might be his longevity as a nonacademic president from a partisan political background. He has a bachelor’s degree from the School of Public and International Affairs at Princeton University and a law degree from Georgetown University. Daniels, who is 73, has not talked about his plans. The university did not make him available for an interview.

In his announcement to Purdue’s Board of Trustees, Daniels praised the board and his successor, Mung Chiang, Purdue’s dean of engineering and executive vice president for strategic initiatives.

Late last year Chiang dropped out of consideration to lead the University of South Carolina, according to the Associated Press, to focus on his family and “on current responsibilities at my home institution and not on other leadership opportunities.”

Chiang is uniquely qualified to capitalize on the investments the university has made over the past decade, Daniels said, and will take the university “places no one else could.”

Previous articleAmerican Actor Jack Wagner’s 27-Year-Old Son Found Dead in Los Angeles Parking Lot – Cause of Death Still Under Investigation
Next article‘Transgender’ YouTuber With Over 1 Million Subscribers: ‘Childhood Innocence’ Is A ‘Bullsh*t Fantasy Made Up By Adults’
- Advertisement -