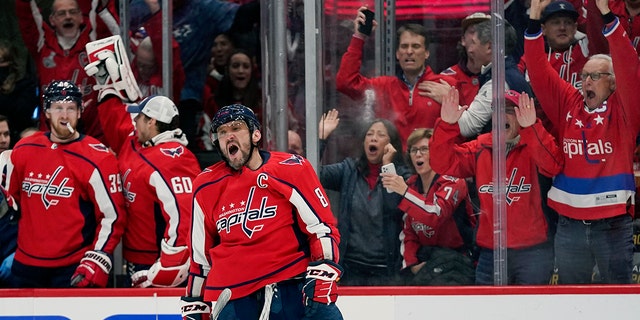 Fans chanted Alex Ovechkin’s name after a goal, much as they have for almost two decades.

For the first time in more than a month, they went home happy.

Washington’s longtime captain scored his 33rd goal of the season and his 763rd in the NHL to move three back of Jaromir Jagr for third place on the career list. Amid Russia’s invasion of Ukraine ordered by the president he has long supported, Ovechkin — the face of the hockey franchise in the U.S. capital and a Stanley Cup champion — was serenaded with chants of “Ovi! Ovi!” that have become quite familiar during his 17-year career.

Ovechkin’s goal and another one by Orlov late in the third period after a power play expired put an exclamation point on Washington’s first home victory since Jan. 22 and first in regulation since Dec. 29. The Capitals had lost six in a row at home as part of a slump that included defeats in 14 of their first 22 games in 2022.

“The last month was not what we want,” Ovechkin said on ESPN. “Obviously we were struggling. It was a little bit frustrating. But it was a good response by everybody, and we just have to play the same.”

This one was never in doubt. In winger Anthony Mantha’s first game since Nov. 4 after recovering from left shoulder surgery, the Capitals had an extra jump in their step from the opening faceoff and dominated a team far above them in the standings in what could be a playoff series preview.

Long after Washington’s strong start, Kuznetsov scored on a 5-on-3 power play late in the first period to make it all pay off. Slovak defenseman Martin Fehervary added his fourth of the season midway through the second off a gorgeous pass from forward Conor Sheary.

Before and after Ovechkin’s goal, Vanecek was a rock in net for a team that for weeks could use more timely saves. He slid to make a right pad save on Carolina winger Martin Necas and poked the puck away from Andrei Svechnikov during a crucial sequence early in the second.

“The guys help me a lot; they block shots in the first, second and third periods,” said Vanecek, who registered his third shutout of the season in his second game back from injury. “I try to help them, too. It feels good.”

The two power-play goals and important saves came a day after general manager Brian MacLellan’s frank comments about what was ailing the Capitals. MacLellan said his realization of where his team ranks in the NHL hierarchy might make him less aggressive at the March 21 trade deadline.

More performances like this might change his mind. With buzz building about Columbus closing fast for the eighth and final playoff seed in the East, earning two valuable points against the Hurricanes put Washington back up 10 with 26 games to play to the Blue Jackets’ 26.

Carolina has lost two in a row and had its point streak snapped at seven games. The Hurricanes took six minor penalties, continuing a recent pattern of undisciplined play, and didn’t do much to help goaltender Frederik Andersen, who finished with 28 saves.

“Really, throughout the year we haven’t had those kind of penalties,” coach Rod Brind’Amour said. “Very rare. Lots of penalties. That’s definitely a trend I don’t like. I haven’t liked it at all.”

NOTES: Washington made room on the roster for Mantha by putting left wing Carl Hagelin (eye) on LTIR and forward Joe Snively (upper-body injury) on regular IR. … Veteran center Derek Stepan returned to Carolina’s lineup, replacing rookie Seth Jarvis. … Because of the NHL’s division-only schedule last season, it was the Hurricanes’ first visit to Washington since Jan. 13, 2020. … The NHL announced earlier Thursday the Capitals would be the Hurricanes’ opponent in the outdoor Stadium Series game in Raleigh, North Carolina, on Feb. 18, 2023. It’s Washington’s fourth outdoor game and Carolina’s first.

Hurricanes: Host the Pittsburgh Penguins on Friday night in the second half of a back-to-back.