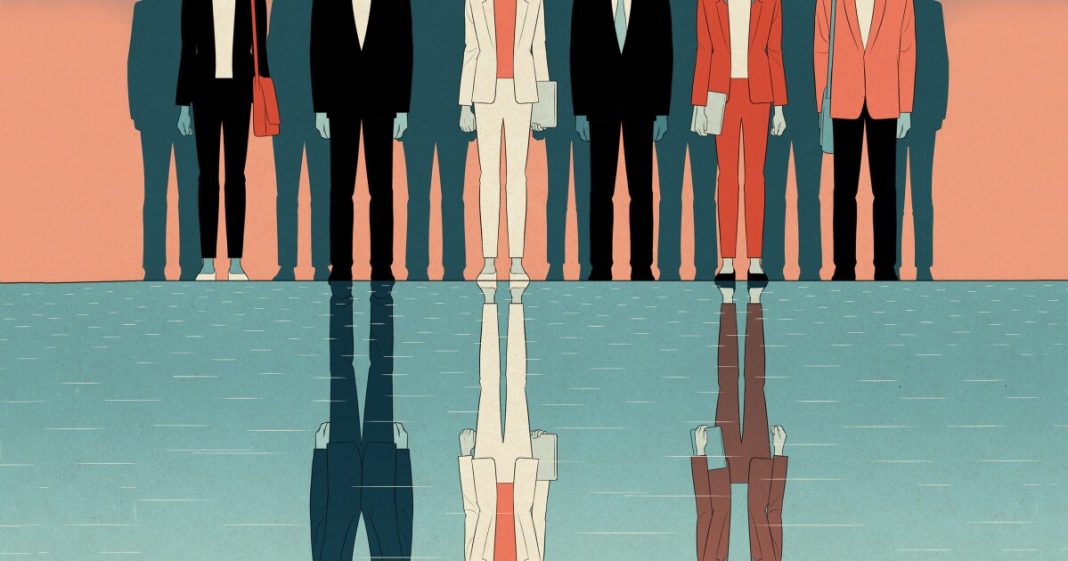 
For over a decade, colleges have committed (and recommitted) to diversity, equity, and inclusion among faculty. But how close is higher education as a sector to achieving the goal of racial parity?

According to a new study, the increasing diversity of tenure-track faculty is barely keeping up with that of the U.S. population. At the current rate, the study’s authors wrote, higher education will “never achieve demographic parity among tenure-track faculty.”

Using data from 1,250 institutions and the U.S. Census Bureau’s projections, the study found that the percentage of underrepresented tenure-track faculty increased by 0.23 of a percentage point per year on average between 2013 and 2020, to 13 percent. But according to Census projections, the same underrepresented groups, which made up roughly 35 percent of the U.S. population in 2020, will increase by 0.2 of a percentage point per year. The researchers calculated that parity — defined as the faculty and the U.S. population having equal shares of underrepresented racial and ethnic groups — would be effectively unattainable at this rate.

The study projected that, by 2060, the percentage of underrepresented tenure-track faculty at all institutions will be 22 percentage points behind the U.S. population. The findings are similar to that of previous studies, which found student-body demographics are also failing to reach parity with the country’s population.

“If universities are going to continue to make old claims about how much they value diversity and inclusion and how important it is, then they should walk the walk,” said Neil A. Lewis Jr., one of the study’s authors and a professor of communications and social behavior at Cornell University.

Having a diverse faculty, research shows, is linked to student success. A new report from the Education Trust found that Black and Latino students are more likely to graduate when the faculty is more diverse. White students, meanwhile, are more likely “to develop deeper cross-cultural and critical-thinking skills and greater levels of empathy.”

The authors of the study on faculty parity question a common explanation for the lack of faculty members from underrepresented groups: the “leaky pipeline” problem. The model asserts that higher education, the pipeline to tenured faculty positions, is a straight line along which barriers and inequity create “leaks” through which underrepresented groups are more likely to fall. In order to increase the pool of diverse candidates for tenure-track positions, the “pipeline-repair” model’s proponents seek to remove barriers for underrepresented students, increasing the diversity of hiring pools.

But the study’s authors found that there has “clearly” been an overall increase in diversity among qualified candidates for faculty jobs since 2007.

“There’s always this talking point that comes up — that, ‘Well, there’s just not enough people in the pipeline to hire. That’s why we can’t diversify.’ But that’s actually an empirical question.” Lewis said. “Then we looked, and there’s actually tons of people that could be hired.”

Lewis said that institution-level initiatives — programs focused on improving a single university’s faculty diversity — can lead to, for example, underrepresented faculty members’ moving from institution to institution rather than introducing new qualified people to academe.

“Yeah, your school might temporarily solve this problem. You might increase the diversity of your faculty,” Lewis said. “But if you zoom out and look at the broader system, nothing has changed.”

If colleges diversified their faculty at 3.5 times their current pace, parity could be possible by 2050, the study found. That rate would be just 0.78 of a percentage point over the current pace — a small number, but a big jump compared with the sector’s minimal progress thus far.

“We’re not asking to turn universities upside down overnight,” Lewis said. “It’s taking the pool of candidates that’s there and the pool that we know is growing and dipping into it at a reasonable level.”

Lewis said colleges should consider the systemic problems within higher ed and confront them so that underrepresented scholars “can have productive and positive experiences.”

“They stay longer,” he said. “And that’s how we create this larger change.”