Biden Was Silent on Student-Loan Debt Relief in This Week’s Speech to the Nation. It’s Not the First Time. 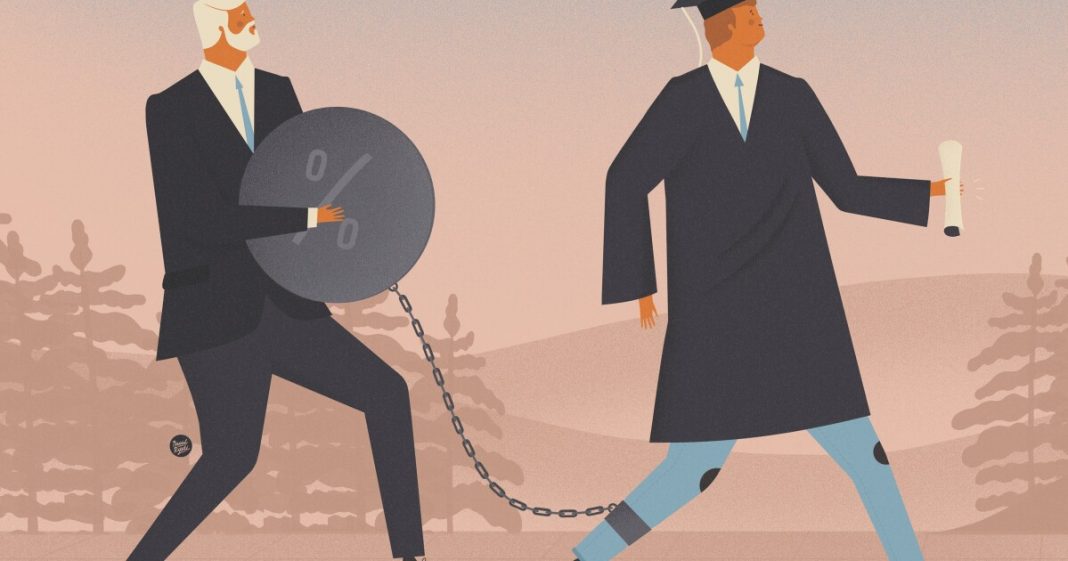 
When President Biden took office, just over a year ago, many advocates of student-loan debt relief hoped their moment had finally arrived, and a broad swath of Americans would soon see those loans wiped away.

Once a fringe idea, such debt relief had gained significant traction in recent years, embraced by progressive Democrats and some Republicans, including former President Donald J. Trump. On the campaign trail, Biden pledged to cancel at least $10,000 in debt for each student-loan borrower. He also promised to forgive federal student debt incurred at public colleges and universities, historically Black colleges and universities, and other minority-serving institutions for borrowers earning up to $125,000 a year.

More than a year into his term, however, those promises have not materialized. Notably, in the State of the Union address on Tuesday, Biden touched on increasing the maximum Pell Grant and expanding support for HBCUs and community colleges, but made no mention of student debt. And though he spoke about college affordability in an address last year to a joint session of Congress, then too he did not mention student loans. By contrast, President Barack Obama talked about student debt in every one of his State of the Union addresses. Biden’s omissions may indicate concerns about the policy tools he has the power to wield and the political feasibility of wielding them.

The issue affects 45 million people, who hold a combined $1.7 trillion in student debt, according to the Student Borrower Protection Center. The issue is also top of mind for many student borrowers now because the pause that was put in place for federal student-loan repayments during the pandemic is set to expire on May 1, although it has been extended several times and could be again.

Among those borrowers is Jennifer Cardenas, 34, of Fontana, Calif. The daughter of Mexican immigrants, Cardenas said that in high school she wanted to attend college but felt she had to work to help support her five younger siblings. Cardenas worked a hodgepodge of jobs after graduating from high school, including in retail, in warehouses, at restaurants, and as a tutor, but always thought that she should go to college to make a better life for herself. Cardenas also dreamed of running for office someday to better help her community, where she felt the voices of Black and brown families were not represented in government.

Cardenas eventually graduated from Columbia University last spring with $67,000 in debt. She works full time as an outreach specialist for Young Invincibles, a youth advocacy organization, and holds a part-time job working with students learning English , to pay back her private student loan while her federal loan is on hold. She says she and other students of color “value higher education as a form of social mobility.”

“There’s no other way for me to be able to break that gap without getting a higher education,” she said.

Cardenas is not alone in arguing that student debt is an issue of equity. “When we think about who carries the burden of student debt in our country, it’s women, Black women, and in California, Latina women,” said Kristin McGuire, executive director of Young Invincibles. “We have a system that disproportionately impacts these people who are [also] impacted by lower wages, and continues to perpetuate the cycles of debt and poverty in these communities.”

Rather than pursue universal loan forgiveness for student borrowers, the Biden administration has thus far taken a more targeted approach. For example, the U.S. Department of Education last fall expanded the eligibility for and reach of the Public Service Loan Forgiveness program, which forgives student loans for public-service workers in government and nonprofit groups. The administration has also expanded efforts to help borrowers who were defrauded by their colleges, and discharged the debt of borrowers with permanent disabilities. In total, the administration claims to have canceled around $17 billion in student loans for more than 700,000 borrowers.

“Student loans are financially devastating to our economy and people’s personal finances,” Brewington said. “They can’t afford basic goods that allow you to live a dignified life.”

The issue of student debt relief has wide appeal across the political spectrum. According to a recent poll by the Student Borrower Protection Center, nearly two-thirds of likely voters support the cancellation of some or all student-loan debt, with even stronger support among Black and Latino likely voters.

But while advocates are pushing for Biden to help borrowers through executive action, the administration has said it is waiting for Congress to act. It is legally unclear whether the president has the authority to discharge federal student-loan debt unilaterally.

Despite the appeal of debt relief, universal loan forgiveness could raise both policy and political questions. Some worry that broad cancellation would be politically unpopular, given that some borrowers can afford to pay off their loans and others have long ago worked to pay them off.

Jonathan Fansmith, assistant vice president for government relations at the American Council on Education, which favors targeted relief for borrowers but is more cautious about widespread student-loan cancellations, said that the higher-education areas Biden did single out in the State of the Union are a good indication of his priorities.

Given that a year has passed, and White House officials have avoided action on universal forgiveness and focused on narrower approaches, he said, it seems “unlikely they’re going to do something” on the issue.

But advocates say they will continue to work for universal debt relief. “We’ll continue to fight hard,” said McGuire, of Young Invincibles. “We have the support of the majority.”