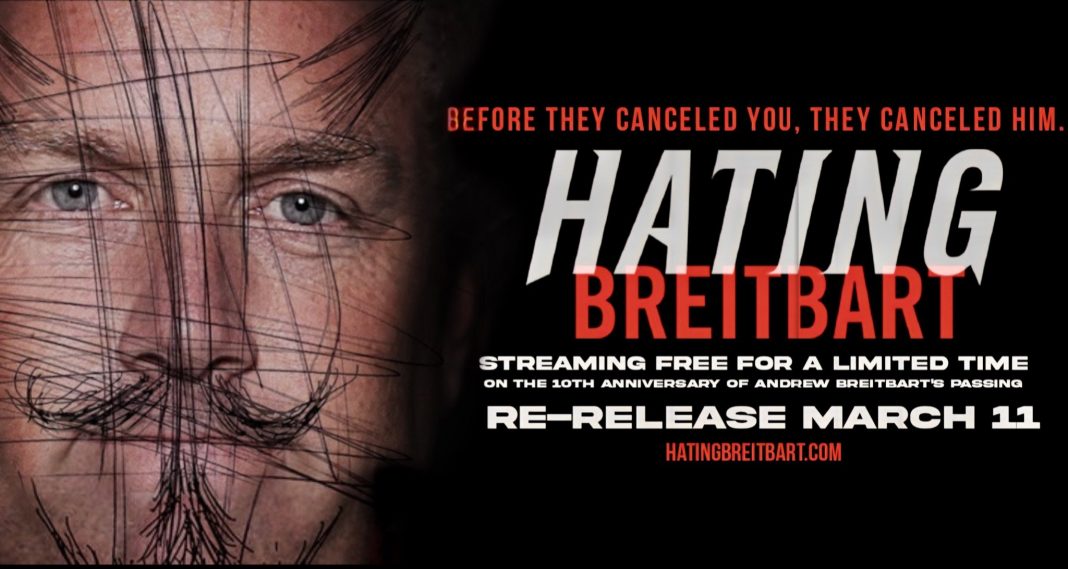 
This is very exciting news. As you know, after 5 long years of being banned from the major outlets, Hating Breitbart is back! We’re re-launching the film starting tomorrow, Friday, March 11th, in honor of the 10 year anniversary of Andrew’s passing.

Speaking to the Gateway Pundit, Andrew Marcus, Filmmaker and Producer of Hating Breitbart said, “I want the film to be seen by as many people as possible, so I’m giving it away free for the next two weeks in the hope that it will inspire a new generation of people to get in the fight.”

Below is the press release and links to additional media:

The producers of the feature-length documentary, Hating Breitbart, are proud to announce the re-release of their intimate portrait of self-described “Middle-class media mogul,” Andrew Breitbart.

While everyone has heard of Breitbart.com, due to his untimely death in 2012, many people do not know the man that made it happen.

Breitbart leveraged his position as behind-the-scenes editor of the Drudge Report to launch his disruptive media juggernaut, Breitbart.com.

The filmmakers followed Breitbart, a former liberal, for 2 years capturing the meteoric rise of an internet media upstart who built his eponymous brand by exposing corruption at America’s highest levels and becoming an unlikely leader and darling of American conservatives everywhere, consequently earning him America’s most powerful enemies.

“Andrew Breitbart declared war on the mainstream media and on the institutional left. Hating Breitbart will show you how and why he did it,” says director, Andrew Marcus.

“This is the perfect moment for the world to rediscover this film,” said Marcus. “Breitbart was one of the early targets of modern cancel culture. His story was unique at the time, but a decade later, we live in a new era of institutionalized cancel culture. Now Andrew Breitbart’s story is everyone’s story.”

The film itself was a target of organized cancel culture when originally released, earning the distinction of having the widest point spread at the time between audience score (98%) and critic score (0%) on Rotten Tomatoes.

Originally released in 2012, just months after Breitbart’s passing, the film has been unavailable for viewing by the general public since it was banned from major platforms in the aftermath of Donald Trump’s 2016 election.

“We’re thrilled to be working with breitbart.com to make Hating Breitbart available again,” said Marcus. “Relaunching it with them feels like we’re bringing the story home where Andrew’s spirit will always live on.”

Extra content, including never-before-seen footage and deleted scenes, can be found at HatingBreitbart.com and F-U-War.com