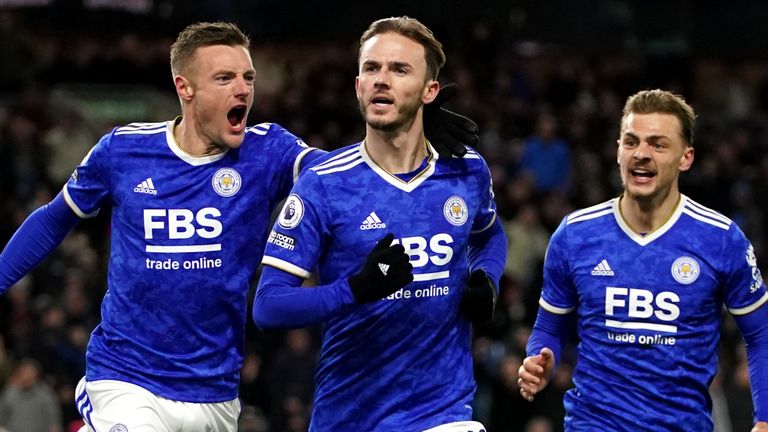 
James Maddison and Jamie Vardy came off the bench and scored a goal each to seal a 2-0 win for Leicester as Burnley missed the chance to move out of the relegation zone.

Leicester found Nick Pope in outstanding form at Turf Moor but Maddison finally beat him with a stunning, left-footed effort from outside the box (82) after collecting a Vardy lay-off following Kasper Schmeichel’s long-range clearance.

Vardy, who was making his first appearance since December following a hamstring injury, then sealed Leicester’s first Premier League win in over two months when he headed home a left-wing cross from Harvey Barnes (90), with Brendan Rodgers describing his goalscoring return as a “huge lift” to the Foxes.

Before Leicester’s breakthrough, it appeared a string of excellent saves from Pope were going to clinch a draw for Burnley which would have moved them above Everton and out of the bottom three.

But Maddison’s superb effort, which came moments after Pope had made a full-stretch stop to deny Barnes, ensured Burnley remain 18th while Leicester celebrate a first Premier League win – and first clean sheet – since their 1-0 victory over Liverpool on December 28.

Man of the match: Nick Pope

Pope’s late save from Barnes was one of many over the course of the 90 minutes, the first of which came when he dived low to his left to push a Ricardo Pereira effort around the post in the early stages.

The right-back’s effort looked certain to find the bottom corner following his jinking run into the Burnley box but Pope showed razor-sharp reflexes to deny him, then stopped a diagonal effort from Patson Daka with his foot soon afterwards.

Leicester continued to dominate, as they would most of the game, but Pope came to Burnley’s rescue again when he stuck out his right arm to somehow repel a stinging, close-range effort from Barnes after he had cut in from the left shortly before half-time.

It was a dazzling piece of goalkeeping from the 29-year-old and it seemed Pope’s performance would prove decisive when he got fingertips to Barnes’ curling effort shortly before Maddison managed to put one out of his reach.

Burnley lost captain Ben Mee to injury in the first half, and while they did threaten on occasion, their performance was not at the level of their last three, which had allowed them to take seven points from a possible nine against Brighton, Tottenham and Crystal Palace.

Maxwel Cornet thought he had given them the lead in the first half when he slid home from Aaron Lennon’s low cross but he was flagged for being marginally offside and VAR upheld the decision.

The Frenchman went close again in the second period when he poked wide under pressure from Caglar Soyuncu after being played in on goal by Dwight McNeil.

Sean Dyche’s side had another scoring opportunity moments after Maddison’s opener, with Wout Weghorst unable to direct a corner on goal when sliding in at the far post, but Vardy’s emphatic header then sealed a victory which boosted Leicester and ended Burnley’s three-game unbeaten run.

Rodgers: Huge lift to have Vardy back

“In the second half, our idea was to bring our talents into the game and both those players showed their big quality and brought real energy for the final 20 minutes,” he told Sky Sports.

“Jamie couldn’t start, he’s only trained for a few days, but he’s worked very hard with the medical team.

“It’s a great credit to him because he came to us and told us he’d love to be involved and that shows you what he’s all about. 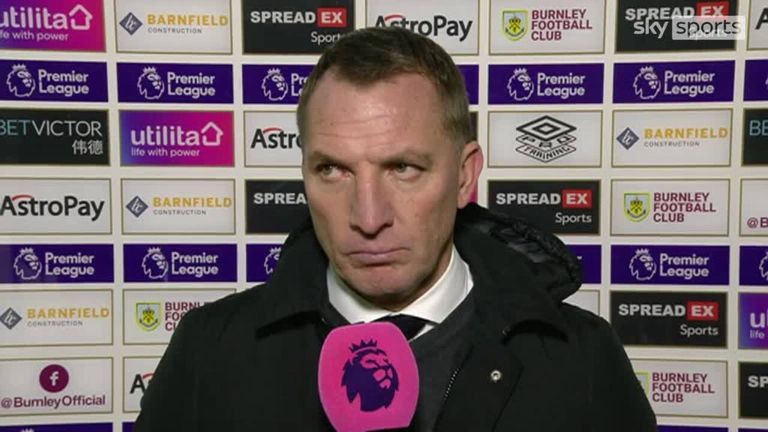 “You just see when he’s on the pitch, the threat, the movement. He’s a top, top player and it’s a huge lift for us to have him back.”

He also hailed his side’s defensive resolve, adding: “It’s a great win and a very important clean sheet for us as well. I think the result had been coming for us for a few weeks but this is a very important three points for us.

“We will keep persevering. We’ve got to take it game by game, keep focused and keep trying to play our football.

“We can be better than we were tonight but we showed amazing resilience in our defending and that’s what really pleased us.”

Dyche: We didn’t do enough

Burnley boss Sean Dyche said: “We weren’t as good as we have been, particularly in the first half.

“Without being terrible, we just allowed soft things against us, didn’t play with enough tempo, didn’t get the ball forward quick enough and didn’t ask questions of Leicester. 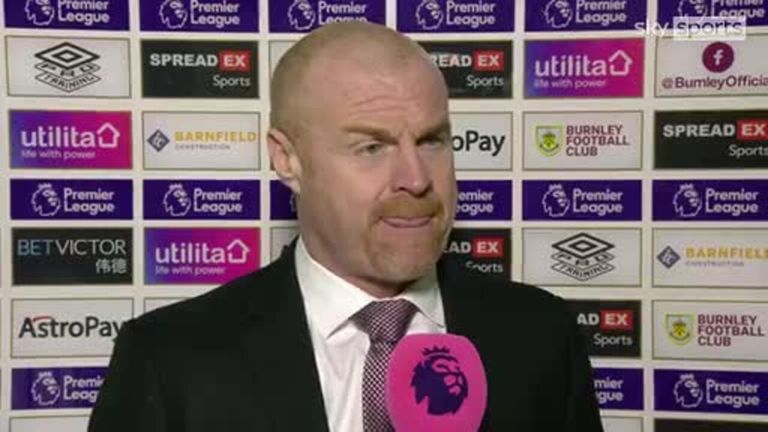 Sean Dyche says his Burnley side did not test Leicester enough

“Second half, we got a bit more of a grip on the game, but we didn’t really open them up.

“I think Maxwel Cornet had a good chance and we had a really good chance from a set piece, but overall we didn’t ask enough questions of Leicester in the end.”

On Ben Mee, who was forced off with an injury, he added: “He’s a very experienced player and a very good player who brings that calmness to the back four. We’re waiting to find out news on how bad it is.”

Both teams will return to Premier League action on Saturday 5 March as Burnley take on Chelsea at 3pm, while Leicester will face Leeds at 12.30pm.