Buttigieg says DOT will dole out $2.9 billion in infrastructure grants to states and cities 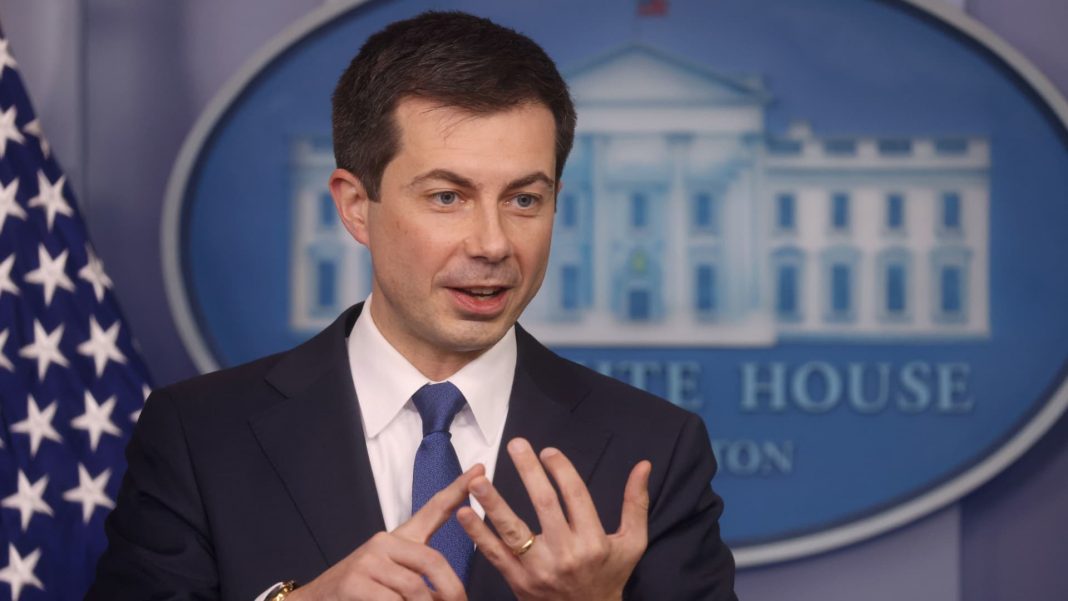 U.S. Secretary of Transportation Pete Buttigieg speaks to the news media during a press briefing at the White House in Washington, U.S., November 8, 2021.

Transportation Secretary Pete Buttigieg on Wednesday said the administration was ready to dole out $2.9 billion in grants for state and local bridge, road and other infrastructure projects.

Buttigieg told reporters Tuesday that applications for the funds are due by May 23 at 5 p.m. ET and that approvals are expected at some point in the fall.

“Across the last year, I have traveled and seen some of the most glaring and serious infrastructure needs around this country,” the Transportation secretary said. “Often we’re seeing infrastructure that is generations old, very much in need of repair or replacement.”

State, regional and local governments will be able to contend for the grant funding through three separate programs with a single application.

The National Infrastructure Project Assistance program is designed for massive projects than span jurisdictions or are “regional projects of significance.” The Transportation Department will award 50% of funding to projects greater than $100 million and will divvy up $1 billion in funds over the first year.

The second program, known as Infrastructure for Rebuilding America, is meant to fund smaller highway, freight and rail construction projects. The Biden infrastructure provides $8 billion for that program over five years.

The remaining portion of funding will fund the Rural Surface Transportation Grant Program with funds exclusively available for rural communities. Some $300 million in grants will be available through that project in 2022.

The $2.9 billion is a broad, albeit small portion of the trillion-dollar infrastructure law the president enacted in November. The White House said in a press release Wednesday morning that the quick turnaround and streamlined application process will make it easier for state and local governments to bulk up the pipeline of “shovel-ready” projects and ease supply-chain bottlenecks across the country.

“These investments will create good-paying jobs, grow the economy, reduce emissions, improve safety, make our transportation more sustainable and resilient, and expand transportation options in rural America and other underserved communities,” the administration said in the release.

The broader legislation funnels $110 billion in additional funds to repair roads and bridges, $65 billion for broadband and about $90 billion in guaranteed funding for public transit over five years.

While much of Wednesday’s announcement focused on the details of grant applications, the administration noted that it sees the infrastructure projects as an avenue through which it can fight the supply-chain hurdles blamed for rapidly rising inflation.

“Thanks to the Bipartisan Infrastructure Law, this funding will help enable more communities to build vital infrastructure projects that also strengthen supply chains and reduce costs for American families,” the administration said in its press release.

The projects funded by the bill will also have a secondary economic impact by reducing time spent snarled in traffic, wear and tear on cars and improving access to public transit, the administration has said.

But critics note that will likely take months, if not years, before large-scale infrastructure projects work to cool inflation.

Still, inflation, currently at a 40-year high of 7.9%, could moderate over the next year the Federal Reserve raises interest rates. A resolution to the Russian-Ukraine war could also help stabilize wheat and crude oil prices.