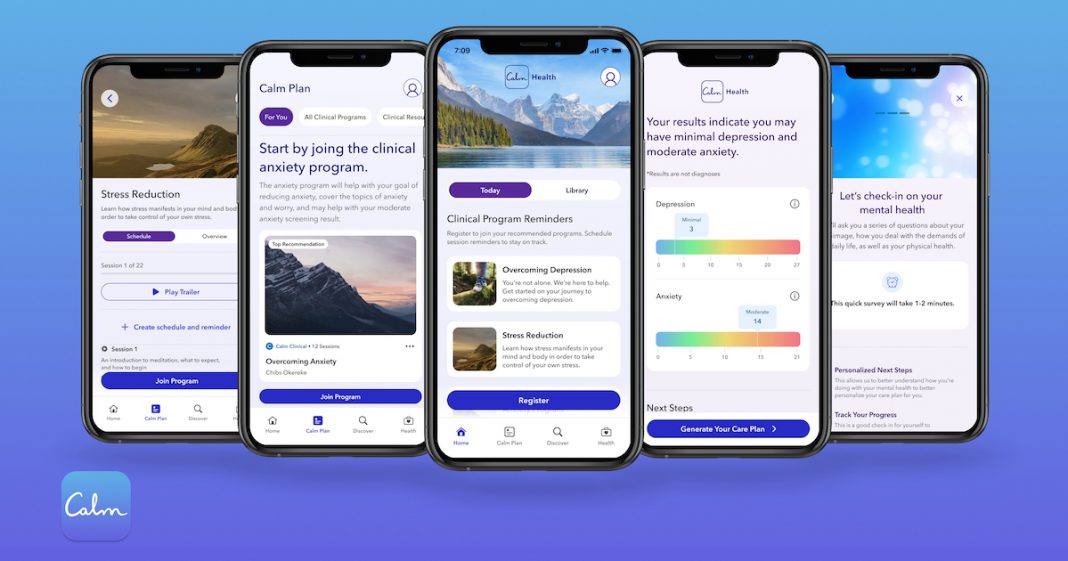 The company said the offering, dubbed Calm Health, will include condition-specific programs that are “designed to bridge the gap between mental and physical healthcare.” Calm Health will also include tools for communication with providers and caregivers as well as medication tracking.

The mental health programs will start with support for patients with anxiety or depression, as well as programs for users as they prepare for therapy or to utilize in-between sessions. Calm said it will eventually add mental health programs to support people with physical conditions like hypertension, obesity, heart disease and cancer.

“Mental health has risen to the forefront of our nation’s health concerns,” Calm CEO David Ko said in a statement. “From the tolls of the pandemic to financial uncertainty and workplace anxieties, people have turned to Calm over the past ten years to manage their mental health. As we move into healthcare, our goal is to reach even more people with clinical mental health tools and destigmatize the importance of regular mental healthcare.”

The new offering was first teased when Calm announced the acquisition of Ripple Health Group, a health tech company that makes apps for care coordination and condition management, earlier this year.

But Calm hit a financial rough patch in August, laying off about 20% of its workforce. According to a memo first reported by The Wall Street Journal, Ko wrote that the company was “not immune to the impacts of the current economic environment.” A number of other digital health and health tech companies have let go of workers in recent months.

Mental health continues to be a popular area for digital health funding, even as investors pour less money into the space compared with last year. Calm last announced a $75 million Series C round in late 2020, which boosted its valuation to $2 billion.

One big Calm competitor is Headspace Health, the result of a 2021 merger between the meditation and mindfulness-focused Headspace and digital mental health company Ginger. Headspace Health has also been making acquisitions this year. It recently purchased Sayana, maker of AI-enabled mental health-tracking and sleep apps, and the Shine app, a mental wellness platform focused on culturally competent and inclusive offerings.

Previous articleThe Download: bots for the brokenhearted, and AI for life and death decisions
Next articleBioIntelliSense acquires AlertWatch to expand its patient monitoring products
- Advertisement -