Can Public Regionals Grow Their Way Out of Financial Trouble? 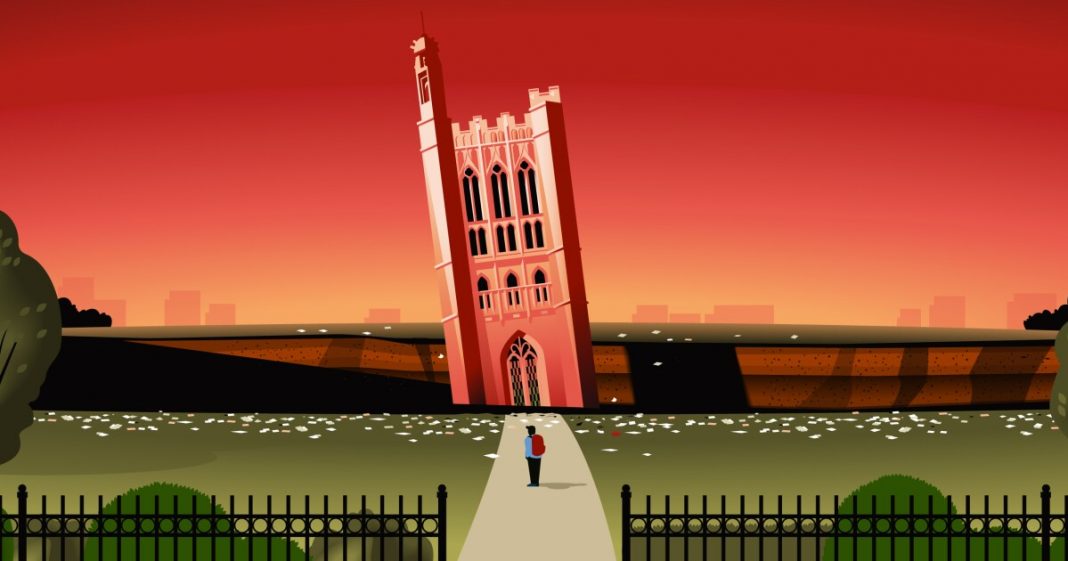 But the university’s grand vision has crumbled in the wake of the pandemic: Enrollment has slid more than 14 percent over the past two years, the university ended the previous fiscal year with a $14-million budget deficit (more than 10 percent of its total budget), and the president who helped lead the expansion plans resigned suddenly in June. College leaders are preparing to cut programs and faculty members, and the state’s governor has called for an investigation into the institution’s finances. Some state lawmakers are even questioning whether the university, commonly called NJCU, should remain open.

NJCU’s story is a cautionary tale for similar institutions — small public regional colleges with ambitions to expand in a crowded higher-education market. While its real-estate dealings have drawn unfavorable scrutiny, the university was responding to challenges that face its peers, in northern New Jersey and around the country: increased competition for a declining number of high-school graduates.

“It was reasonable for them to take a shot at growing,” said Robert Kelchen, a professor and head of the department of educational leadership and policy studies at the University of Tennessee at Knoxville. “But the overall pool of potential students is far smaller than anyone was expecting, and students are generally wanting to go to bigger, more selective institutions.”

The university’s fiscal situation will not get better anytime soon. Enrollment is projected to fall again next year, and officials estimate a shortfall of nearly $13 million in the 2023 fiscal year, according to a September report to the university’s Board of Trustees.

How did things get this bad? Faculty members who objected to the expansion plans blamed the former president for mismanagement and betting the university’s future on risky ventures. None of the projects “have shown proper return on investment to date,” said a University Senate resolution of no confidence approved a year ago, “and it’s unclear when and if they ever will.”

University officials acknowledged the deals have not worked out as planned, but said the arrangements are not entirely to blame for their fiscal troubles.

“Would you have been able to predict a once-in-a-lifetime pandemic?” said Andrés Acebo, the university’s general counsel, describing the impact of Covid-19 on enrollment. “Since the fall of 2018, the university has lost close to 1,300 students,” Acebo said. “That would have a seismic impact on any institution. It would make life easier to say that real estate is the problem.”

ublic regional universities, like NJCU, enroll about 40 percent of all college students nationally, and a far larger percentage of minority, low-income, and first-generation students than better-known flagships and top research universities do. At NJCU, for example, more than 70 percent of students qualify for Pell Grants, according to federal data, and two-thirds are Hispanic or Black, a reflection of Jersey City’s extraordinary diversity.

But a lack of state support, limited ability to attract students from outside the region, and sparse fund raising have made the university vulnerable to economic downturns and demographic shifts that have led to fewer high-school graduates, especially in the Northeast and upper Midwest.

In Connecticut, for example, the system of state colleges and universities is facing a budget shortfall of nearly $270 million, according to news accounts, in large part because of declining enrollments and increased labor costs.

In Michigan, public regionals are shuttering dorms or selling buildings to developers to offset the loss of tuition revenue, while enrollment at the flagships, the University of Michigan at Ann Arbor and Michigan State, has remained strong and is even growing.

NJCU has fared worse than many of its peer institutions. From 2016 to 2021, undergraduate enrollment tumbled more than 21 percent, according to data from the university.

This fall’s enrollment declined nearly 5 percent from a year ago, university figures indicate, and it’s projected to decline 8 percent again next fall, according to the September report to the university’s board.

t one point, the university had a plan to put itself on a better footing, to serve more students in the region and diversify its revenues.

In 2014 the president, Susan Henderson, signed a 20-year lease on a 70,000-square-foot building to house its business school, with an annual rent of $2.3 million.

In 2017, Henderson was among the officials who broke ground on a 22-acre development that included a dormitory for the university, a performing-arts venue, and several commercial sites for apartments, retail stores, and parking. The land is owned by the university, but under their public-private partnership, the developers will not begin paying rent until the 2023 and 2024 fiscal years.

In 2018 the university signed a 40-year lease for space at a former U.S. Army base, some 50 miles away from the campus, that was being redeveloped by the state. That deal cost NJCU about $1.6 million a year beginning in 2021.

Initially, those plans seemed to work. Undergraduate enrollment grew 7 percent from 2014 to 2016, according to university figures.

But then enrollment dropped. And over time the real-estate deals led to financial problems, according to university audits and financial analysts at the bond-rating agency Moody’s Investors Service, in part because NJCU’s early enrollment projections were too rosy.

For example, the university’s foundation created a separate limited-liability corporation to finance the construction of the dormitory in the 22-acre University Place development. But because the university didn’t fill the dorm, it has “decided” to pay the corporation nearly $3.5 million since 2020 and has committed $3 million more for the current year, according to an auditor’s report.

Acebo, the university’s top lawyer, also blamed the financial problems on the university’s financial-aid program, which he said had increased from $3 million to $14 million in recent years. The program guarantees that the state’s high-school graduates from families earning less than $65,000 a year can complete their degrees without any student loans if they attend full time. It was another cost that was difficult to cover due to falling tuition revenue and increased operating expenses.

Henderson did not respond to a request for comment.

hile enrollment has fallen at NJCU, the possibility of recruiting more students in the region is dimmed by the crowded market for higher education around Jersey City.

Within just a few miles of the university are several other institutions — Essex County College, Hudson County Community College, Rutgers University at Newark, and the New Jersey Institute of Technology — that are competing for some of the same students who typically attend NJCU.

Some institutions are openly advertising for students in NJCU’s own community. Saint Peter’s University, the Jersey City campus famed for its surprising success in the 2022 NCAA men’s basketball tournament, is even advertising at bus stops around the campus, said Francis Moran, a professor of political science at NJCU and president of its University Senate.

Montclair State University, about a 20-mile drive from NJCU, touts a seamless-transfer program with Hudson County Community College, which is just two miles away. Students in certain majors can start at Hudson and are guaranteed admission to Montclair to complete a bachelor’s degree. Unlike NJCU, enrollment at Montclair has declined only slightly during the pandemic.

For competitive reasons, NJCU should be considering ways to add other locations as expansion projects, said Tennessee’s Kelchen, who was previously a professor at Seton Hall University, which is just 14 miles from NJCU. “If they didn’t try to grow, other universities would eat their lunch,” he said.

But the university needs to be realistic, he said, about the kinds of projects it pursues and the competition for students in the region.

espite the challenges of enrollment and competition, New Jersey’s elected officials have cast the university’s financial problems more as a matter of mismanagement and questioned whether it can remain open.

“I firmly believe an independent investigation into the school’s finances and operations would be in the best interests of the public at this time,” Gov. Phil Murphy said this past summer in a news release announcing his request for such an inquiry by the state comptroller.

In the announcement, the governor, a Democrat, cited news reports that the university’s “2014 surplus of $108 million vanished within one year due to pension liability and the issuance of bonds toward a greater expansion venture.”

The governor’s office did not respond to a request for comment.

University officials have pushed back on those claims, explaining that the governor and journalists have confused the net position with a cash surplus. Instead, they have said, the negative net position is the result of 2015 changes in accounting rules that required NJCU to subtract the cost of pension liabilities that are paid by the state.

Audits and financial analysts have flagged other problems in the university’s development plans. For the past two years, the university has paid $1.4 million to the Strategic Development Group, a real-estate development and consulting firm owned by a former member of the NJCU foundation’s Board of Directors, Anthony V. Bastardi.

“In both fiscal years 2021 and 2020, the university incurred expenses of $0.7 million in monthly retainer fees, pertaining to real-estate consulting and project-management services,” according to the university’s audit.

Acebo said Bastardi’s company had been hired through a competitive bidding process and presented no conflict of interest.

Bastardi, who was on the foundation’s board from 2016 to 2020, said in an email that his company had “served as the special adviser to the president and Board of Trustees on real-estate matters. Our services were procured by means of state-compliant, competitive procedures, and our contract with the university was approved by its Board of Trustees.”

o matter the reasons, the university’s financial woes will have a deep impact on employee morale and the student experience.

Campus leaders are considering cutting up to 30 percent of academic programs, including many nondegree offerings, said Moran, the professor. More than 20 faculty positions could also be eliminated, he said, on top of the more than 40 already lost through attrition in recent years. NJCU employs about 250 full-time faculty members, according to university data.

Many faculty and staff members who do keep their jobs will see a pay cut. The faculty union and the university have agreed to unpaid furloughs of five to 18 days, depending on the employee’s pay.

Moran said many of his colleagues on campus are frustrated by the sense that NJCU is being singled out for a problem affecting many other public regional colleges in the state.

Nearby William Paterson University, for example, cut $30 million from its budget last year and has planned to eliminate 100 faculty positions.

At the same time, the governor added $100 million to the state budget to renovate athletic facilities at the flagship campus of Rutgers University. NJCU’s total budget is less than $140 million.

“We’re going to lose faculty,” Moran said, “but Rutgers is going to get $100 million for a football stadium.” By contrast, he said, NJCU’s request for state money “is a drop in the bucket.”