It is a John and Thady Gosden filly who gets the nod for Sky Sports Racing senior analyst Jamie Lynch in Friday’s Cazoo Oaks at Epsom.

It is less proven form and more projection that suggests this could be an above-average Oaks, as there are several with stars in their eyes, on top of all the relevant trial winners.

The winner will be the one who improves the most, and there are plenty of likely lasses in that regard.

Only half-a-length behind her better-fancied team-mate Tuesday when the pair made the podium in the Irish 1000 Guineas. That trip was probably more of a home fixture for Tuesday, as Concert Hall had already won over 10 furlongs on her reappearance in a Listed race that has worked out well. One of the rare Ballydoyle inmates by Dubawi, but her dam (Was) won the Oaks for Aidan O’Brien in 2012.

Undefeated so far, her currency is more style than substance, but winning three races – including the Musidora – by an aggregate total of 15-and-a-quarter lengths is the very height of style.

Whatever the collective vulnerability of her victims hitherto, her time at York stands up fairly well against Desert Crown’s Dante the following day on drier ground, and it’s abundantly clear that she’s a classy filly, one who’s ready for the Oaks.

She is also bred to relish the distance, by Sea The Stars and from the family of Hazarista who was placed in the Irish and Yorkshire Oaks. The critical question for her is the track as it’s very different to what she has faced so far. A challenge for a filly as big, and as keen, as her.

Oaks favourite Emily Upjohn warmed up for her Classic test with a stretch around Epsom under Frankie Dettori at Monday’s Gallops Morning.

Had With The Moonlight behind her in winning a Listed race at Newmarket last October, and picked up where she left off when beaten less than a length in a Group Three at Saint-Cloud on her comeback. That is still some way shy of Classic level, on a line through Place Du Carrousel, and a race like the Oaks is likely to be beyond her means, for ability if not for stamina (by Sir Percy).

Interesting in itself that she’s still coming this way, despite defeat in a trial, for a trainer who won the Oaks with longshots in 2008 and 2013. On top of that, Chester (fourth to Thoughts Of June) wasn’t a fair reflection of her as she was badly hampered at the critical stage of the Cheshire Oaks, and, after a lean spell, Ralph Beckett’s team look to have turned a corner last weekend.

There are positive dots to be joined with her, for sure, but it’s still a leap of faith to back her in an Oaks.

Her runs this year have been somewhat in the shadow of her stablemate, coming 24 hours and 72 hours respectively after Emily Upjohn had wowed the crowd, and but for that we might all be raving over Nashwa, whose successes have been striking to say the least.

Rather than the sum of her parts, there’s one part in particular that marks her out as a Group One filly, her surge in the hottest part of the race, almost needing to be seen to be believed at Newbury where she went from last to first in double-quick time, virtually on the bridle.

There is clearly a lot of Frankel in her, which will help over the longer trip of Epsom and she’s equally as exciting as Emily Upjohn. 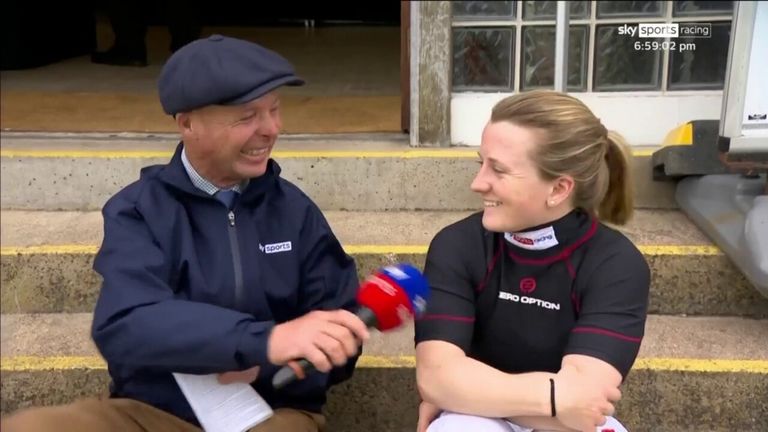 Sky Sports Racing ambassador Hollie Doyle could become the first female to win a Classic this year as Oaks contender Nashwa builds towards a potential run at Epsom.

Bought out of the Shadwell dispersal, she was 35,000 guineas to buy and almost as much to supplement her into the Oaks, but there’s good reason for it, having landed the trial at Lingfield only two weeks after her successful debut.

By Dubawi out of a Cumberland Lodge winner, she has come a long way in little time and there’s no saying how far she can go eventually, but neither the form nor the time of Lingfield suggests she’s quite ready for an examination like the Oaks.

Bottom-rated on official figures, also in the jetwash of Emily Upjohn in the Musidora, and both of those facts underline that she has a mountain to climb in this company. Possible she’ll play the pacemaking part for the Ballydoyle classier contingent.

To overstate the fine front-running ride is to undersell the improvement that went into Thoughts Of June turning the tables with Above The Curve in the Cheshire Oaks, form obviously boosted by the Group One Prix Saint-Alary on Sunday. It’s easy to think from the way she glided around Chester that her straightforward style, and stamina, will get her far at Epsom, but I’d be surprised if there weren’t a few faster than her in the finish.

Above The Curve would probably have been at single-figure odds for the Oaks had she headed this way rather than (successfully) steered towards the Prix Saint-Alary, so it says something that Joseph O’Brien is happy to instead send Tranquil Lady into bat at Epsom.

Behind Concert Hall on her reappearance but showed her truer colours in the Blue Wind, winning as she liked by four lengths, though the Oaks is a notable step up (for class and not just trip) from her task at Naas.

Sister to Oaks winner Minding, and minding her was the priority as a juvenile when she ran only once (short-headed by Discoveries). In contrast, she’s been set an intensive schedule this season, but rising to it, placed in the 1000 Guineas and Irish equivalent (second only to Homeless Queen), something I’m unsure anything else in this field could have done.

In most years a horse like Tuesday – with her profile, pedigree and personnel – would be favourite for the Oaks, especially as this trip could transform her.

The ‘I was at “X” that day’ phenomenon is an unnecessary flourish amongst pundits to add a bit of faux gravitas to their otherwise hollow opinion. Anyway, I was at Newmarket on 1000 Guineas day, most interested in Crenelle for the Pretty Polly, that was until With The Moonlight swaggered her way into the paddock. To say she looks the part is an understatement, also explaining how and why she looked a different proposition at Newmarket, compared to last year.

That form might be a bit shaky, but it made her Godolphin’s chosen one for the Oaks, and she gallops like the extra distance will be a help rather than a hindrance, far more her sire’s daughter (Frankel) than her sprinting dam’s.

A number of these could be a lot better than they’ve been able to express so far, Emily Upjohn chief amongst them, though there’s a premium on her price relating to the margins she’s been winning by, and it’s not stretching it to say that NASHWA could and would have won the same two races had her and her stablemate swapped campaigns this year.

Nashwa hasn’t won her (lesser) races by so far, but the turn of foot she’s shown in the process is striking to say the least, and it’s a significant statement that she’s targeting Epsom after the French Oaks seemed to be the original plan.