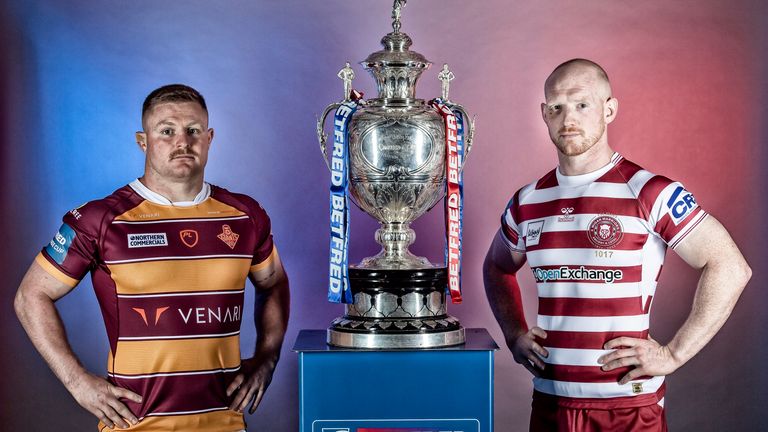 
Rugby league’s first major honour of the year will be decided on Saturday when Huddersfield Giants and Wigan Warriors face off in the Betfred Challenge Cup final, and we look at what is being said and team news ahead of the match…

For one year only, the Challenge Cup final is heading to a new venue instead of its traditional Wembley home as Tottenham Hotspur Stadium plays host to one of rugby league’s showpiece matches.

The 62,850-capacity stadium, which opened in 2019 on the site of Tottenham Hotspur’s former White Hart Lane home, becomes the 12th venue to have hosted the cup final in the competition’s 125-year history.

It is the first time it has been held away from Wembley since being played at Twickenham in 2006 when the former was undergoing redevelopment, although the final is due to return to the national stadium next year.

It is 13 years since Huddersfield were last in the Challenge Cup final and even longer since they actually lifted the trophy, with their sixth and most recent triumph coming all the way back in 1953.

Huddersfield and Wigan have met once previously in a Challenge Cup final. That was in 1920 when Huddersfield won 21-10 at Headingley.

Head coach Ian Watson has been here before though, guiding Salford Red Devils to the behind-closed-doors final of 2020, where they were edged out 17-16 by Leeds Rhinos, as have skipper Luke Yates and full-back Tui Lolohea.

Watson hopes the cup-winning experience of Chris Hill and – although he will not be involved on game day due to injury – Theo Fages, plus NRL Grand Final winners Chris McQueen and Ricky Leutele will prove vital for the other members of the squad as they aim to bring a long-awaited major honour back to West Yorkshire.

“Even from the Salford team in 2019 to 2020, there were different personalities as well and it’s more so for them, the learning and taking bits of people who’ve been there and sampled the environment.

Just two members of the current Huddersfield squad have tasted victory in a Challenge Cup final. They are Theo Fages, who was a winner with St Helens in 2021, and Chris Hill who triumphed with Warrington Wolves in 2012 and 2019.

“At Huddersfield, this time, I feel we’re in a really good spot. We’ve got people like Theo Fages and Chris Hill who’ve been there and won these games, Chris McQueen who’s won NRL finals and Ricky Leutele as well and they can pass their little bits of advice on.

“One of the biggest things is from learning from other people’s experiences when you go into a big game like this.”

Matt Peet has already enjoyed a dream start to his first season as head coach of boyhood club Wigan by guiding them to a Challenge Cup final appearance.

However, the Warriors boss knows the club and the town demand more than that, particularly given the Cherry and Whites’ history of success in this competition.

Highlights of what happened when Huddersfield Giants and Wigan Warriors met in the Betfred Super League two weeks ago.

Highlights of what happened when Huddersfield Giants and Wigan Warriors met in the Betfred Super League two weeks ago.

Victory over Huddersfield would mark the 20th time Wigan have lifted the cup and while Peet is delighted to be in the final, he knows it will count for nothing if they do not come out on top.

“It’s all about winning now, isn’t it?” Peet said. “After the semi-final [a 20-18 win over rivals St Helens] it was a high and a really proud moment, I felt like we’d achieved a big step, particularly to win the way we did.

“But, since then, you know it’s only going to be a quality weekend if you get the result and the performance, and our attention turns to that.

“We’re very proud, it was a goal at the start of the year to take the town to one of the big games, but now the attention shifts to getting the result.

Just three members of the Wigan team have won the cup before. Liam Farrell achieved it with his hometown team in 2011 and 2013 while Iain Thornley was in the Wigan team that won it nine years ago and Brad Singleton won it with Leeds Rhinos in 2015.

“We want expectation, we embrace that and if you don’t want that you’re at the wrong club – I say that all the time.”

Huddersfield are without scrum-half Fages after the France international failed to recover from a calf injury in time. However, 19-year-old Will Pryce is back in contention after completing a 10-match ban for a dangerous tackle.

Jack Cogger, who kicked the game-winning drop goal in the win over Toulouse Olympique in Super League last week, is an option in the halves too, while second row McQueen returns after missing the Giants’ last two games with a groin injury.

Wigan have sprung a surprise by including captain Tommy Leuluai in their 21-man squad, with the scrum-half having initially been ruled out for 10 to 12 weeks with a knee injury sustained in the derby clash against St Helens on Good Friday.

Willie Isa is included too along with Kaide Ellis, who served a one-match ban during last week’s defeat to Hull FC in Super League.