Chicago mom flies to help Ukrainians at Polish border: ‘I could not stay at home’ 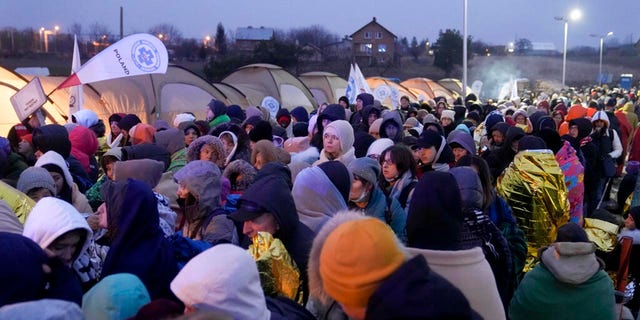 A Chicago woman who spent more than a week helping displaced Ukrainians in Poland — and who will be returning there again soon — revealed to Fox News Digital what it was like assisting refugees who fled Ukraine as Russian troops attacked and ignited the Russia-Ukraine war.

Yulia Skuibida, 39, was born and raised in Kyiv; she’s lived in Chicago for the past 17 years. When she heard that Russia had invaded Ukraine, she felt she had to take immediate action.

The very next day, she boarded a flight to Poland.

“I could not stay at home,” Skuibida said. “When I saw there was bombing in Kyiv, I was just devastated.”

A crowd of refugees awaits transportation after fleeing Ukraine and arriving at the border crossing in Medyka, Poland, on Monday, March 7, 2022.
(Associated Press)

Skuibida arrived in Poland in late February and began gathering supplies both for a medical clinic and for Ukrainian soldiers. While still there, Skuibida described to Fox News Digital the scene at the border.

“I wanted to go there to try and meet them and greet them … and to help them because I speak Ukrainian.”

In Poland, Skuibida said her immediate focus was comforting as many people who fled Ukraine as she could. “Men [from ages 18-60] are not allowed to leave, so it’s mostly women with kids,” Skuibida said.

She was concerned about getting food to those waiting to enter Poland on the Ukraine side of the border, she said.

Yulia Skuibida, 39, was born and raised in Kyiv; she’s lived in Chicago for the past 17 years. When she heard that Russia invaded Ukraine, she felt she had to take immediate action, so she went to Poland to help Ukrainian refugees.
(Yulia Skuibida)

“I knew there were lines of people standing in the cold weather for 15 hours,” Skuibida said.

She added that people donated funds to her so that she could buy supplies and send them across the border.

A Polish border guard assists Ukrainian refugees as they arrive in Poland at the Korczowa crossing, on Saturday, Feb. 26, 2022.
(Associated Press)

As the mother of a 1-year-old, Skuibida said she couldn’t help but think of the challenges that Ukrainian parents were facing as they left their homes and their country while also caring for their children.

“You look in their eyes, and they lost everything.”

“I wanted to just to go here to try and meet them and greet them, try to help them because I speak Ukrainian,” Skuibida said.

Skuibida has been documenting her journey of volunteering on her Facebook page.

On March 1, she posted several photos, captioning the post, “Life at the border.” She shared images of portable toilets, a baby crib, strollers, packaged food and hot beverages.

Skuibida described the weather as unpleasant and “very similar to Chicago weather.”

As time passed, however, she said the lines became more efficient and the wait time to enter Poland diminished, Skuibida said.

“It’s a tough situation, but Ukraine is not going to give up and people will want to stay and people want to help.”

On the Poland side, Skuibida said refugees were generally met with hot coffee, tea and soup.

When Ukrainian refugees cross into Poland, they can get hot coffee or tea. People appeared relieved to be out of immediate danger, Yula Skuibida told Fox News Digital — though many challenges for them still lie ahead.
(Yulia Skuibida)

Skuibida said it took some people days to reach the border — and that she heard stories of people waiting for trains and hiding from gunfire along the way.

“You look in their eyes, and they lost everything,” Skuibida said. “They don’t know what the future holds.”

Skuibida said people who crossed into Poland appeared relieved to be out of danger, though many challenges for them still lie ahead.

A baby crib is shown near the Poland-Ukraine border.
(Yulia Skuibida)

“I know when people come over, they feel safe,” Skuibida said.

She said that after a few days of respite, refugees likely start thinking about their plans for the near future.

“I am very proud to be Ukrainian right now, because we are standing up against Russia.”

“Yes, volunteers are helping to feed them here and there, but for how long is it going to last?” Skuibida told Fox News Digital.

A stroller is shown parked at the Poland-Ukraine border.
(Yulia Skuibida)

Yulia Skuibida, far left, front, is pictured with her friends who volunteered with her at the border. Skuibida said she knew only three people when she arrived in Poland; she met the others as she spent time there.
(Yulia Skuibida)

“Kids have to go to school. Mom has to work in order to find and pay for everything. … Some people came here with nothing, absolutely nothing,” she said.

Though she continued to volunteer at the border, Skuibida also gathered medical supplies to send to a clinic in Kyiv.

She also collected boots and sleeping bags for the Ukrainian military, she said.

Aside from coffee and tea, Ukrainian people who have crossed the border into Poland are also able to get food.
(Yulia Skuibida)

Skuibida is part of the Kyiv Committee of Chicago Sister Cities International; the group had been sending supplies over to Skuibida in Poland.

In some cases, people even flew to Poland themselves to bring the supplies directly to Skuibida, so she could arrange for them to be brought to Ukraine.

Hundreds of beds are shown placed inside a sports hall to accommodate Ukrainian refugees fleeing the Russian invasion at the border crossing town of Medyka, Poland, on Tuesday, March 1, 2022.
(Associated Press)

“We rented two vans and we are receiving certain supplies from Chicago,” Skuibida said.

Skuibida said she drove the goods to the Ukraine border and sent them to the cities most in need.

Vans are shown lined up near the Poland-Ukraine border.
(Yulia Skuibida)

She and other volunteers also bought supplies throughout Poland and areas of Europe and offered them to the Ukrainians.

HOW AMERICAN CITIES ARE HELPING THEIR UKRAINIAN SISTER CITIES

Skuibida said she flew back to Chicago earlier this week because she missed her son, though she’s thankful her husband was able to care for him while she was away.

She said she’s now gathering supplies in Chicago again to bring back to Poland when she returns there in the days ahead.

“I am very proud to be Ukrainian right now because we are standing up against Russia,” Skuibida said.

“We were not ready for any war … and now we’re fighting with whatever we can find.”

She went on, “It’s a tough situation, but Ukraine is not going to give up and people will want to stay and people want to help.”

Previous articleCheltenham Festival: Matt Chapman is joined by Chris Hughes, Kevin Blake and Tom Cannon on Twitter Spaces for On The Timeline
Next articleDemocrats Scramble To Protect Governors In Key Swing States In 2022 Midterms – Hand Out Checks
- Advertisement -