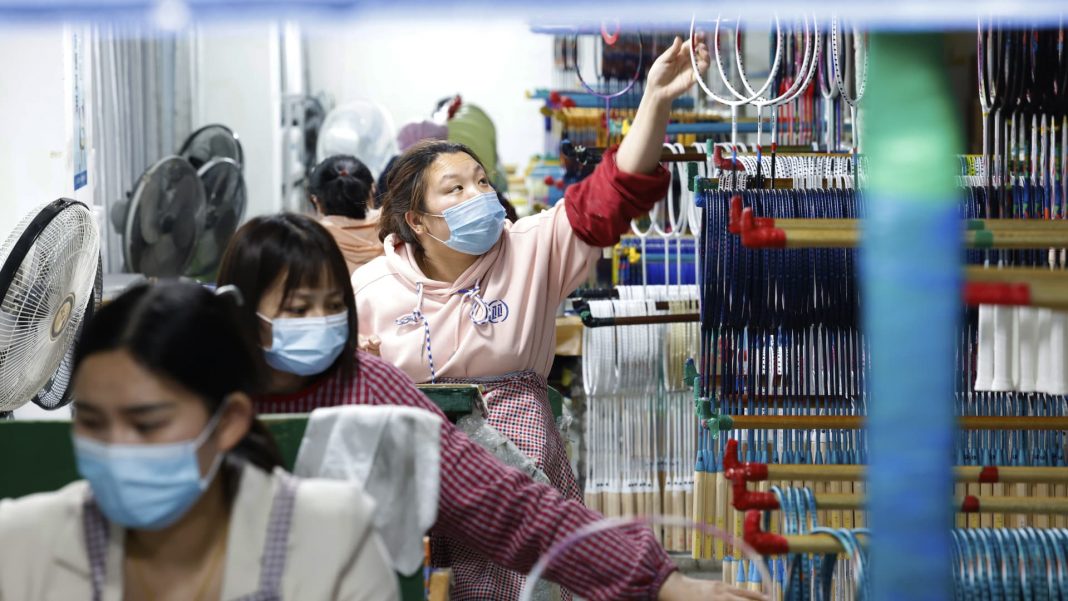 China’s factory activity contracted at a steeper pace in April as widespread Covid-19 lockdowns halted industrial production and disrupted supply chains, raising fears of a sharp economic slowdown in the second quarter that will weigh on global growth.

The official manufacturing Purchasing Managers’ Index (PMI) fell to 47.4 in April from 49.5 in March, in a second straight month of contraction, the National Bureau of Statistics (NBS) said on Saturday. That was the lowest since February 2020.

A Reuters poll had expected the PMI to ease to 48, well below the 50-point mark that separates contraction from growth on a monthly basis.

The headline PMI reading, combined with an even sharper crimp in services, offered the first clues into the performance of an economy ravaged by expanding Covid curbs, such as an extended shutdown of the commercial hub, Shanghai.

Factory activity shrank at its steepest pace in 26 months, a Caixin survey of private business showed, with the new export orders index diving to its lowest since June 2020, suggesting a weakening in one of the few bright spots in the economy.

In a statement, the statistics bureau linked Covid disruptions to as significant decline in both demand and supply in the manufacturing sector.

“Some companies face difficulties in key raw material and component supplies, finished products sales and rising inventories,” the NBS said, with matters seen improving with the pandemic under control and the adoption of supporting policies.

Dozens of major Chinese cities are believed to be in full or partial lockdown, thanks to a strict Covid policy.

With hundreds of millions stuck at home, consumption is taking a heavy hit, prompting more analysts to cut growth forecasts for the world’s second-largest economy.

Electric car maker Tesla has flagged a temporary drop in production due to China’s curbs after it said last week shutdowns had cost about a month of build volume at its Shanghai factory.

Some analysts are even warning of rising recession risks, saying policymakers must provide more stimulus to reach an official 2022 growth target of about 5.5%.

Apart from Covid curbs and heightened risks from the Ukraine War, persistently soft consumption and a prolonged downturn in the property market are also weighing on growth, analysts say.

Authorities have promised more help to shore up confidence and ward off further job losses in a politically sensitive year.

China will step up policy support, the Politburo, a top decision-making body of the ruling Communist Party has said, giving some cheer to battered stock markets.

However, analysts say their task will become harder unless China eases its zero-Covid policy, which it has shown few signs of doing.

“While these (official) messages are positive, the key is about the specific policies and their implementation,” Zhiwei Zhang, president and chief economist of Pinpoint Asset Management said in a client note on Friday.

The smaller borrowers, especially those in manufacturing are really suffering this time round, because they don’t have the cash reserves.

Banker at a top Chinese bank

But such projects take time, and Beijing is seen as wary of another massive stimulus program such as its spending of 4 trillion yuan ($605.82 billion) during the global financial crisis in 2008 and 2009 that created a mountain of debt.

China’s yuan currency fell more than 4% in April, its biggest monthly drop in 28 years, while stock markets have been the second worst performers this year after sanctions-hit Russia.

China’s gross domestic product (GDP) grew 4.8% in the first quarter from a year earlier, beating analysts’ expectations for a 4.4% gain, but March data weakened sharply, with a contraction in retail sales and the highest jobless rate since May 2020.

A sub-index of construction activity, a key economic driver Beijing hoped would prop up growth this year, stood at 52.7 in April, down from 58.1 in March.

Construction equipment maker Caterpillar Inc warned on Thursday that demand for excavators in China, one of its largest markets, could slip below pre-pandemic levels in 2022. Lockdowns have also hurt sales of companies such as General Electric and 3M.

One banker at a top-ten Chinese bank said she had seen the greatest impact among small to medium-sized enterprises.

“The smaller borrowers, especially those in manufacturing are really suffering this time round, because they don’t have the cash reserves,” she said.