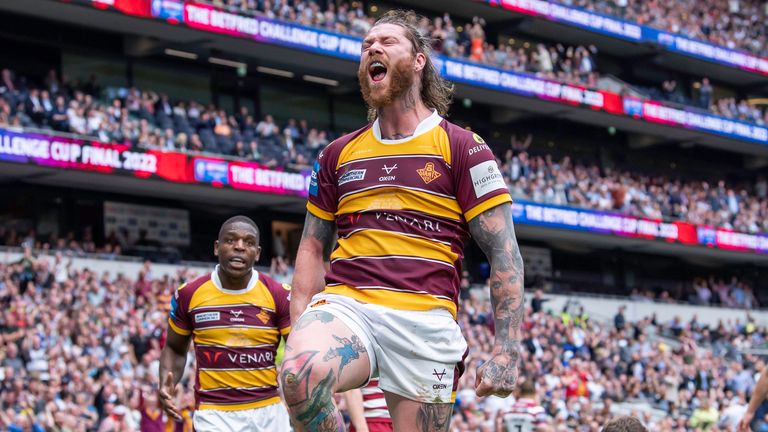 
Huddersfield second row Chris McQueen won the player of the match accolade despite the Giants being edged out 16-14 in Saturday’s Betfred Challenge Cup final against Wigan Warriors; It is a sign of how moving to the Betfred Super League has given the 34-year-old a new lease of life

If Chris McQueen wanted to prove a few people wrong with his move to Huddersfield Giants, then it is difficult to argue the 34-year-old has not done that over the past two years.

The one-time England international left Australia and the NRL behind in September 2020 to move to the land of his father’s birth in a bid to rejuvenate his career with the Giants after struggling for game-time at Wests Tigers.

It is a move which McQueen is in no doubt has worked out just as he had hoped and the 2022 season has seen him play arguably his best rugby since moving to West Yorkshire, underlined by being named winner of the Lance Todd Trophy in Saturday’s Betfred Challenge Cup final.

“I came over here at a difficult time,” McQueen said. “I wasn’t playing much first-grade back at home and there was all the Covid stuff going on.

“For me, it was an opportunity to get a fresh start and kickstart things because I truly believe and had no doubt I still had plenty to offer.

“I felt like back home, in the NRL, some people had probably put a line through my name and I probably had a bit of a chip on my shoulder for that.

“I certainly took coming over here as a good opportunity to prove to other people, but also prove to myself, I still had what it takes.”

Although he was proud to be voted player of the match, receiving 14 of the 39 votes cast by members of the media at Tottenham Hotspur Stadium prior to the deadline of the 75th minute, McQueen – one of three try-scorers for the Giants in the final – made no secret of the face he would have swapped it for lifting the Challenge Cup.

Instead, it was Wigan Warriors who triumphed thanks to Liam Marshall’s try three minutes from time which snatched a 16-14 win. That also meant for the second year in a row the Lance Todd Trophy would be won by a player who finished on the losing team following Niall Evalds being awarded it as Castleford Tigers went down to St Helens last year.

It is only the second time since the prize was first awarded in 1946 that has happened, with St Helens’ George Nicholls and Wakefield Trinity great David Topliss receiving the accolade in 1978 and 1979 respectively despite their sides being beaten.

McQueen became only the fifth Australian to win it and the first since now-Hull FC head coach Brett Hodgson did so for Warrington Wolves in 2012, as well as the first second row to be named Challenge Cup final player of the match since Wigan’s Dennis Betts in 1991. I certainly took coming over here as a good opportunity to prove to other people, but also prove to myself, I still had what it takes.

He is the first Huddersfield player to win the Lance Todd Trophy since Peter Ramsdale did so on his 19th birthday in 1953 when he inspired them to what remains their last Challenge Cup triumph too, and Giants head coach Ian Watson believes it is a sign of the impact McQueen is having at the John Smith’s Stadium.

“He’s probably been one of our man of the matches most games this season, he’s been phenomenal,” Watson said.

“Not everyone sees what goes on behind the scenes as well and someone like Crispy who has played the amount of games he has, at the level he has played at, to keep doing what he is doing week in, week out is a massive pat on the back for someone like him.

“I’m really pleased he’s got it, he deserved to get it and he’s a top, top professional.” 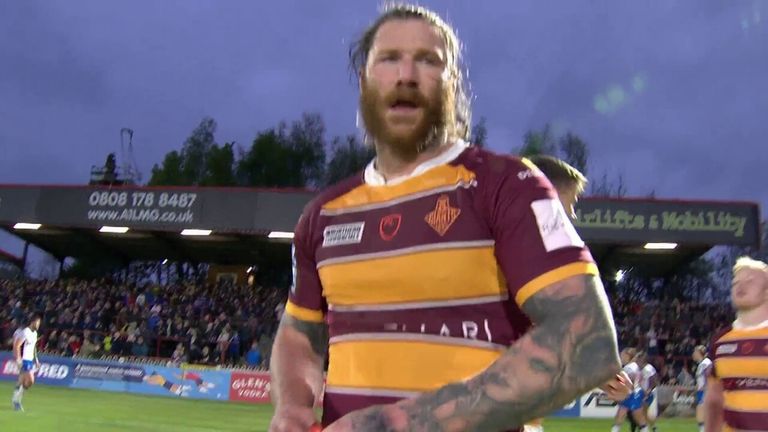 Chris McQueen twisted, turned and dived over to score for the Huddersfield Giants in the win over Wakefield Trinity in the Betfred Super League earlier this season.

Chris McQueen twisted, turned and dived over to score for the Huddersfield Giants in the win over Wakefield Trinity in the Betfred Super League earlier this season.

McQueen and his team-mates have to quickly put the agonising Cup final defeat to the back of their minds though as the Giants return to Betfred Super League action with an onerous trip to second-placed Catalans Dragons on Friday.

Huddersfield currently sit fourth in the standings, three points behind the Dragons, and McQueen knows there is still plenty left for them to play for as the second half of the 2022 campaign gets under way.

“I’m extremely proud of the boys and the effort we put in, but really disappointed for the whole club,” McQueen said.

“I don’t think we deserve what we got, it’s just little key moments in games cost you. We were on for 99 per cent of that game, there were just a few little moments and it cost us. He’s probably been one of our man of the matches most games this season, he’s been phenomenal

“We spoke already about how we’re only halfway through the Super League season. This is going to hurt, but we’ll get around each other and address this game through the week.

“We’ll put it behind us and we’ve still got half the season to go. We’re going well, but it’s not time to pat ourselves on the back for things we’ve already achieved because we’ve still got plenty to achieve this year.”