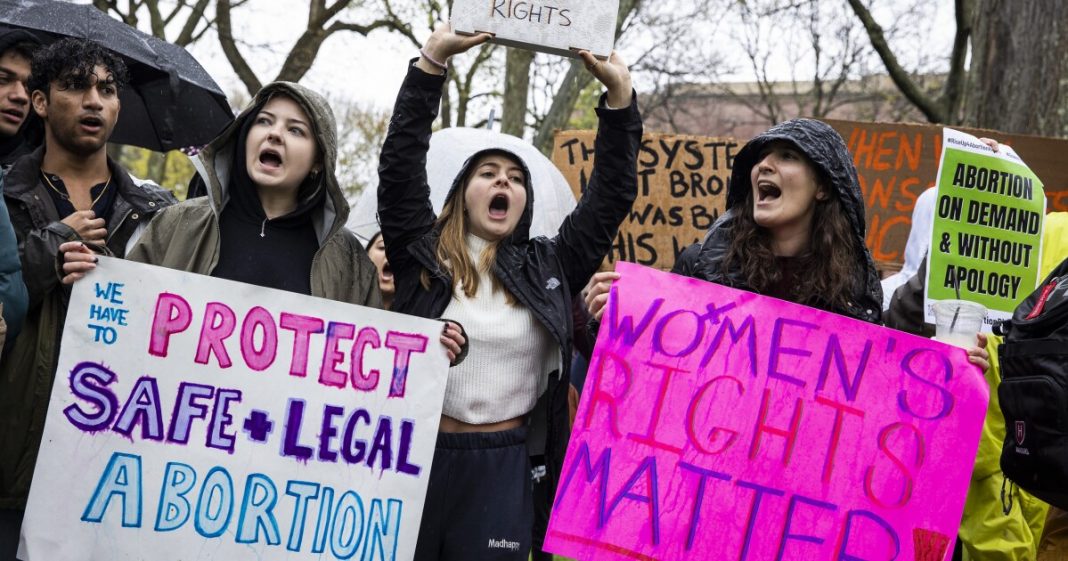 
The Education Department released guidance on Tuesday reminding colleges and universities that Title IX prohibits discrimination based on pregnancy, childbirth, abortion, and other related conditions.

Colleges and universities cannot exclude students from educational access because they are pregnant, had a child, or had an abortion, the guidance said. The 19th News first reported on the reminder, which comes in the form of a fact sheet.

The guidance explicitly states if students need to take a leave because of a pregnancy or to give birth or have an abortion, as well as some other “related conditions,” colleges must allow them to do so. When students return, they must be reinstated to the status they held when their leave began. If they’ve missed deadlines or classes, they should be able to make up for that work.

This guidance is not new. Discrimination based on pregnancy was already protected under Title IX. But the Education Department’s announcement indicates that federal officials are making the issue a priority — which could signal greater enforcement of legal protections for students and employees who are pregnant or seek abortions. The department’s Office for Civil Rights can investigate colleges for alleged violations of Title IX and other federal civil-rights laws.

The reminder comes just over three months after the Supreme Court overturned Roe v. Wade and Planned Parenthood v. Casey, the legal precedents that established and upheld the constitutional right to an abortion. Since the court’s decision — in a case called Dobbs v. Jackson Women’s Health Organization — at least 14 states have either banned or severely restricted abortion and several more may follow.

In some states, the bans prohibit people from promoting abortion or helping others obtain an abortion. Those laws have led to fear and uncertainty about what students, faculty members, and college staff can say in the classroom and on campus about the procedure. At the University of Idaho, for example, the general counsel told employees they should remain “neutral” on abortion and approach the topic with caution.

The fact sheet released Tuesday instructs colleges that their students and employees should be able to file a complaint if they feel they have been discriminated against because of a pregnancy or an abortion. In addition, students and employees can file a complaint with the Education Department’s civil-rights office. College employees should also be allowed to take leave because of pregnancy, childbirth, abortion, and other related conditions, the fact sheet said.

This guidance may be foreshadowing the Biden administration’s new Title IX regulations. The Education Department released proposed changes to the regulations in June, exactly 50 years since Title IX became law — including a reaffirmation that Title IX protects students from discrimination based on pregnancy or related conditions. The department is reviewing hundreds of thousands of comments on its proposals and has yet to issue final changes to the regulations.

Balancing the Biden administration’s guidance with state laws that criminalize abortion will be important for colleges, Kristina W. Supler, a lawyer in Ohio who has represented students and professors in Title IX cases. The new state laws have yet to be tested in court.

“You’re dealing with the intersection of state and federal law,” she said. “These are very complicated legal issues that are directly impacting the lives of students.”