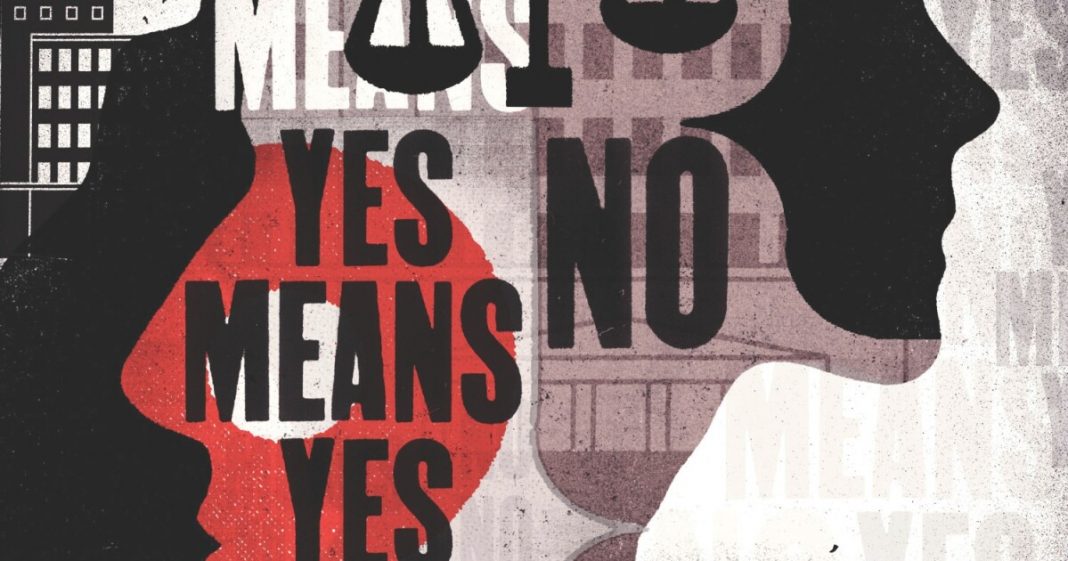 
Many of the most popular teen-focused shows on television — Euphoria, Sex Education, Normal People, to name a few — depict or discuss rough or aggressive sex. In great detail.

There may be a reason for that. Research shows that more young people are having rough sex, which can include hair-pulling, spanking, choking, scratching, and slapping.

But the consent education college students get when they land on campus hasn’t caught up with this shift, experts say. Rough sexual experiences require asking for consent before introducing each new element. That may not be obvious to students.

Consent education — the talks and trainings colleges require for new students as a form of sexual-assault prevention — needs to keep up with the changing face of hookup culture, experts say. Failing to update the curriculum could leave students unprepared to navigate gray areas and could lead to physical injury or sexual assault.

The Evolution of Consent Education

Consent education has come a long way since Andy Thyrring was a college student in the 2000s. At the time, the guidance was, “Don’t walk alone, cover your drink, always carry your keys between your fingers,’” recalled Thyrring, a senior program manager in the Office of Education Solutions at the Metropolitan State University of Denver.

Colleges rushed to implement consent education in 2011, when the U.S. Department of Education directed them to take sexual-assault complaints more seriously or risk falling out of compliance with Title IX. “No means no” became a familiar chant on campus.

According to Thyrring, colleges are now in the era of “enthusiastic consent.”

“We need to make sure that everybody wants to be there,” Thyrring said. “We are checking, and it’s not just a one off. We’ve added some complexity, I think, into what goes into ensuring consent is present.”

Today’s consent education often involves completing an online module or listening to a speaker at orientation. Peer educators may come into dorms to talk to students about consent and sexual assault.

But with so much to cover, and many students entering college without receiving sex education in high school, these trainings often do not approach the topic of rough sex.

In a 2021 survey of students at a large Midwestern university, 79 percent of respondents with a current sexual or romantic partner said they had engaged in rough sex. Thirteen percent said they did so “often.”

Debby Herbenick, a public-health professor at Indiana University at Bloomington and the lead researcher in the study, recommended that college health educators design sex education that reflects the kinds of sex college students are actually having. She said she isn’t aware of any colleges that have incorporated information on rough sex into their consent-education programming.

“This is particularly important in light of the fact that choking/strangulation appears to be increasing as part of sexual assaults,” Herbenick wrote in a 2021 study of young women’s experiences with choking during sex. “Young people may benefit from learning how to talk about and negotiate consent related to choking and also how to mitigate health risks if they choose to engage in choking.”

Students who engage in rough sex may experience injuries such as neck bruises, troubled breathing, and recurrent headaches, Herbenick said. Because those injuries can be delayed or invisible, people who injure their partners during rough sex but don’t see any immediate negative reactions may incorrectly assume their behaviors are safe.

“I would hope those media examples would include consensual elements,” Amoa-Awuah said. “And if they don’t demonstrate that, it makes it seem like sex without consent is a norm, which is not true.”

Students who are sexually assaulted are more likely to drop out and experience mental-health problems, said Elise Lopez, director of the University of Arizona’s Consortium on Gender-Based Violence and an assistant professor of practice in the College of Public Health. And for assailants, believing that a sexual assault was actually consensual will have a “ripple effect” on future relationships.

“As institutions of higher education, our number-one goal is educating students and making sure that they can go out into the world as adults who can use critical-thinking skills and treat other people right and be respectful and be safe,” Lopez said. “And this is one of those skills that you need to do a lot of things. It’s not just about sex.”

Consent education can help correct erroneous thinking, experts say, but it is important that students can relate to it so they are better prepared when situations arise. If colleges are not able to facilitate meaningful conversations about sex with students, they could leave students unprepared to engage in such conversations with their partners.

Thyrring said one of the reasons colleges may not be up to date on their consent education is because the topics are taboo.

“I think our access to different things has increased while our comfort with discussing them and having real-life conversations about them broadly has not increased at the same rate,” Thyrring said.

If colleges are not able to facilitate meaningful conversations about sex with students, they could leave students unprepared to engage in such conversations with their partners.

“On one hand, you have huge proportions of students who we know engage in these behaviors,” Herbenick said. “And yet colleges are really challenged at how to educate about them, especially given the political environment.”

Jennifer Henkle, director of sexual violence prevention and response at Naspa — Student Affairs Administrators in Higher Education, said her organization has not started talking about consent education related to rough sex. She only recently heard about it at a conference.

At a time when many students receive their consent education through online modules, conversations about consent in rough sex would be best held in person, Henkle said.

“For many of us, it may be uncomfortable. It’s not stuff we’re used to talking about openly,” Henkle said. “But I think if we’re going to truly make an impact, it’s something we need to be open about.”

In recent years, peer-education groups have filled in gaps in students’ understanding of sex and consent.

Amoa-Awuah, who started at the University of Arizona this spring, is working to expand her institution’s consent-education efforts to reach more parts of campus.

“My hope is that we can do some collaborations to really reach some of the most targeted folks for interpersonal violence on campuses,” Amoa-Awuah said.

Consent-education efforts have traditionally centered white, cisgender, and heterosexual women, she said. But transgender women and women of color are at a greater risk of sexual violence, according to the National Crime Victimization Survey and the National Intimate Partner and Sexual Violence Survey. Amoa-Awuah is trying to create “entry points” that are culturally and physically accessible. She plans to incorporate games into the curriculum to create levity around the topic of sex.

And while discussing consent in rough sexual experiences is important, she said, some students might not yet be ready for those conversations. For some, “holding hands feels like high stakes to ask,” she said.

It’s about meeting students where they are — sometimes literally. At her previous institution, Colorado State University, Amoa-Awuah hosted a healthy relationships event in the lobby of a dorm. Most of the people who stopped by were just trying to get to their room.

“We were quite literally right in front of people’s faces, so they couldn’t miss us,” Amoa-Awuah said. “And when they saw that other people were playing games and having fun, they were like, ‘Oh, what is this? I have to check this out.’”

But what works at Arizona or Colorado State might not work at a different institution, Amoa-Awuah said. She’s working to identify her campus’s needs in order to create consent-education measures that “make sense.”