Colleges Struggle to Provide Clarity Amid Disruption in Student-Debt Cancellation 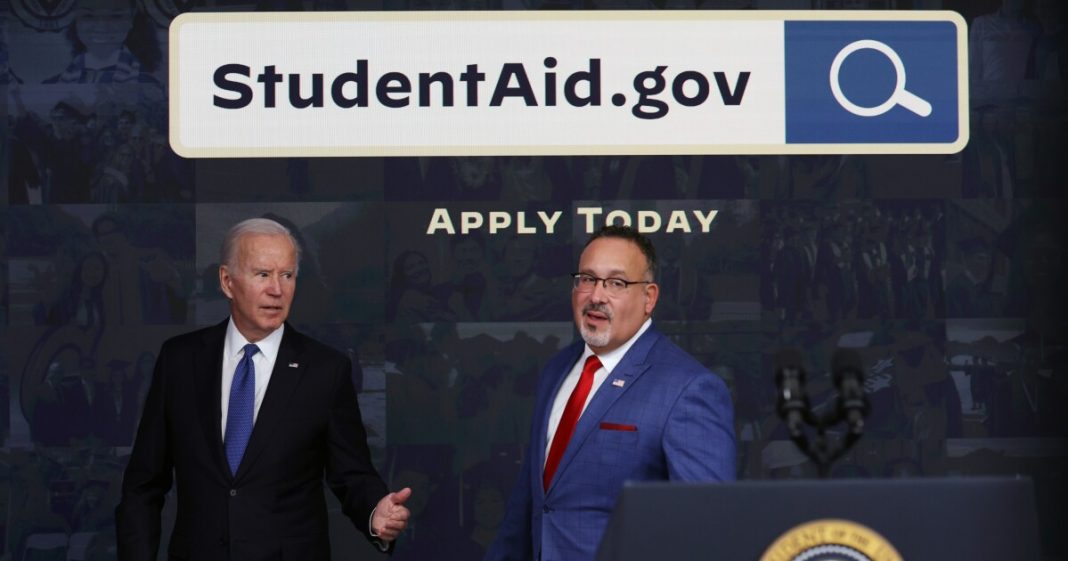 
Three months ago the Biden administration, with much fanfare, rolled out a plan for canceling some student debt. But in the past week, after 26-million borrowers had submitted applications for relief, two court rulings brought it to a halt.

The plan would cancel $10,000 of student-loan debt for borrowers who make less than $125,000 or households that bring in less than $250,000. Pell Grant recipients would have up to $20,000 forgiven. The Congressional Budget Office has estimated that the program will cost $400 billion over the next 30 years.

A banner on the Education Department’s student-aid website states that the debt-relief program will not accept applications, for now. For those who already applied, the statement says the department will hold onto those applications.

For colleges’ financial-aid offices, many of which are understaffed, the court actions have brought in waves of questions and concerns from current students and alumni. The constant stop-and-go of the program has made borrowers feel like “a political Ping-Pong ball,” one financial-aid official said.

“We’re in a pretty complicated place, and even if we sort of expected this stop-go nature, being in the middle of it creates a lot of confusion and anxiety for borrowers,” said Justin Draeger, president and chief executive of the National Association of Student Financial Aid Administrators, or Nasfaa. “Trying to keep track of multiple lawsuits and the technicalities just adds to the confusion.”

President Biden said in a speech last week — a week before the program was struck down — that the administration was on track to cancel debt for 16 million borrowers. Now that’s up in the air.

Another key question is whether borrowers will have to start making payments on their federal student loans in January — something they haven’t had to do since the Biden administration paused payments in March 2020.

“It just makes it difficult for financial-aid offices to, No. 1, put any kind of plan together, but also, No. 2, to field questions from students as well,” said Aaron Basko, associate vice president for enrollment services at the University of Lynchburg. “Obviously they get calls, and they really don’t have any answers, anything more than what’s in the headlines.”

With the start date on payments looming ahead, Draeger said, he’s hoping the administration will extend the pause as court decisions play out.

“To have those borrowers start repayments, and then have to go backward and have those payments rolled out and then onboard it — it makes a complicated process even more complicated,” Draeger said.

The Washington Post reported on Tuesday that the Biden administration is discussing extending the pause.

According to a recent survey of over 31,000 borrowers by the Student Debt Crisis Center, a nonprofit that advocates for debt relief, two thirds reported that they had not financially recovered from the pandemic.

“That really goes to show us just how persistent these financial obstacles are for student-loan borrowers and why we need not just short-term relief, but long-term relief like extending the student-loan-payment pause, and also permanent relief like debt cancellation,” said Cody Hounanian, executive director of the Student Debt Crisis Center.

Student-debt relief had already been on hold since October, when the U.S. Court of Appeals for the Eighth Circuit temporarily blocked the program in response to a lawsuit filed by six Republican-led states.

The White House immediately appealed Thursday’s ruling. The administration has not announced whether it will appeal the Monday ruling.

In a statement to the Associated Press after Monday’s decision, a White House official said the Biden administration believes there is legal authority for the program and that “it is necessary to help borrowers most in need as they recover from the pandemic.”

As court proceedings drag on, it’s unlikely borrowers will learn of the program’s fate for weeks. In the meantime, unless something changes, loan payments will resume in January.

Financial-aid offices are doing the best they can to field inquiries about that.

“What we advise students is that unless there is another extension, they should be prepared to go into repayment in January,” said Kenneth Ferreira, who oversees student financial services at Franklin Pierce University.

Ferreira said he and other administrators tell students and alumni that they are keeping an eye out for updates from the Department of Education and advise them to watch for emails from their financial-aid offices.

“The last thing that you want to have happen is to go into a delinquency status over really what is uncertainty right now,” Ferreira said.