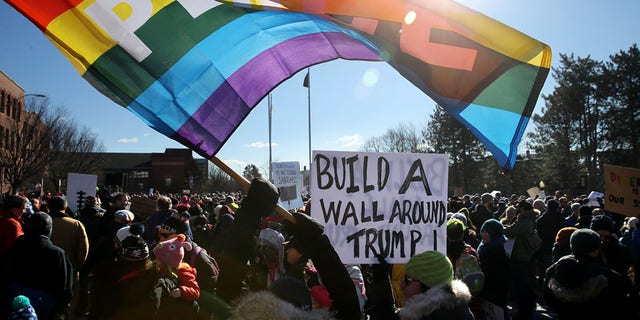 A convicted child rapist turned illegal immigrant who initially entered the U.S. in New York had spent years hiding out in a Massachusetts sanctuary city before ICE arrested the foreign fugitive last week.

Vagner Brito Paixao, a criminal fugitive previously convicted and sentenced to serve 14 years in prison on child rape charges in Brazil, was arrested near Somerville, Massachusetts, on May 25.

The 31-year-old was taken into custody by officers with the U.S. Immigration and Customs Enforcement (ICE) Enforcement and Removal Operations (ERO) Boston field office.

BOSTON POLICE WARNS OF UPTICK IN DRINK-SPIKING, ‘ROOFIE’ DRUGS AT KICK-OFF TO SUMMER

ICE said in a statement Monday that Brito Paixao, who “posed a threat to public safety based on his conviction in Brazilian criminal court,” was arrested without incident.

A rally is held in support of Somerville, Massachusetts’ 30 years as a sanctuary city on Feb. 4, 2017.
(Craig F. Walker/The Boston Globe via Getty Images)

Brito Paixao is believed to have spent at least three years hiding out in Somerville, which has been a sanctuary city since 1987 and was reaffirmed as such as recently as 2016, according to its website.

In 2014, however, former Democratic Somerville Mayor Joseph Curtatone signed an executive order granting the local police department permission to honor criminal warrants presented by ICE, especially in cases of serious or violent felonies or for those on the Massachusetts Sex Offender Registry.

“Convicted child predators like Brito Paixao cannot use the United States to hide and avoid serving prison time,” ERO Boston acting Field Office Director LaDeon Francis said in a statement. “This predator would still be posing a threat to the community were it not for the outstanding efforts of our officers and critical law enforcement partners in Brazil. This arrest gives me great pride in the team of dedicated ICE officers we have in Boston who are deeply committed to protecting our communities.”

Hundreds of protesters attended an event organized by Resist the Raids and Massachusetts Jobs With Justice on Oct. 8, 2017, calling for the release of ICE detainees held at the Suffolk County House of Correction in Boston.
(Matthew J. Lee/The Boston Globe via Getty Images)

ICE ERO Boston deemed Brito Paixao removable from the United States pursuant to criteria specified by the Immigration and Naturalization Act, according to ICE’s statement Monday. He will be held in ICE ERO custody pending his removal and transfer to federal law enforcement authorities in Brazil.

Brito Paixao has been sentenced in a Brazilian court to a term of 14 years imprisonment for child rape, according to Brazilian law enforcement authorities, who issued a warrant for his apprehension.