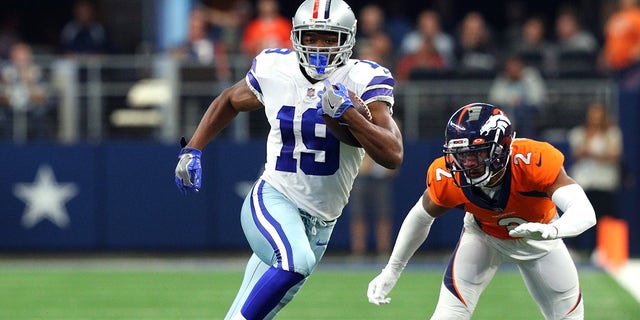 Amari Cooper is officially on the move, as the Browns are finalizing a trade to acquire the 27-year-old receiver from the Cowboys.

Amari Cooper #19 of the Dallas Cowboys catches the ball in front of Pat Surtain II #2 of the Denver Broncos during the first quarter at AT&amp;T Stadium on November 07, 2021 in Arlington, Texas.
(Richard Rodriguez/Getty Images)

It’s a move that was expected, as multiple reports confirmed that the Cowboys were shopping Cooper and his $22 million cap hit in 2022. He has three years remaining on his five-year, $100 million contract he signed in 2020.

Cooper failed to reach the 1,000 yard mark in 2021, albeit missing two games due to COVID-19. In eight seasons with the Raiders and Cowboys, Cooper has hauled in 517 receptions for 7,076 yards and 46 touchdowns. Cooper has been selected to the Pro Bowl four times.

Dak Prescott #4 of the Dallas Cowboys celebrates with Amari Cooper #19 after a touchdown during the fourth quarter against the New York Giants at AT&amp;amp;T Stadium on October 10, 2021 in Arlington, Texas.
(Richard Rodriguez/Getty Images)

He figures to slot right in front of Jarvis Landry on Cleveland’s depth chart. Who he’ll be catching passes from will be the question, as the Browns are one of the rumored teams in the Deshaun Watson sweepstakes.