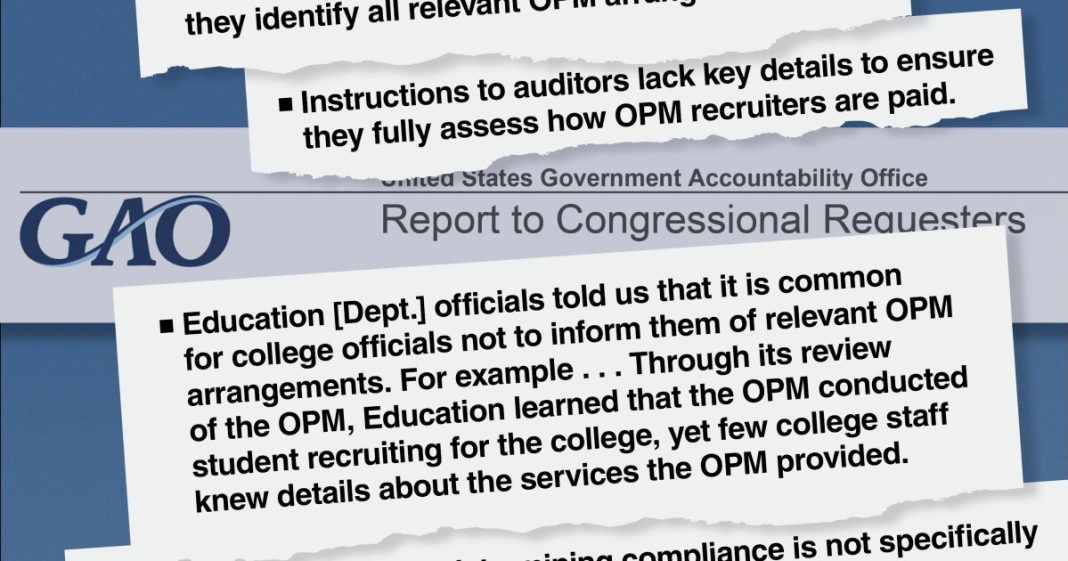 This kind of partnership — where an OPM may take more than half, and as much as 80 percent, of generated program revenue in return for those services — is only legal because of a 2011 Dear Colleague letter. That Department of Education guidance stated that so long as a college pays its third-party vendor for “bundled services” that include no targeted compensation and incentives for recruitment, the partnership doesn’t violate the Higher Education Act of 1965.

However, the GAO’s report, which was initially requested by Sen. Patty Murray, Democrat of Washington, found that it’s been difficult for the federal government to monitor whether all of these partnerships are actually playing by those rules. The Education Department, in fact, doesn’t even know how many college-OPM contracts exist.

That’s because its guidance for independent auditors “lacks details” needed to both identify these partnerships and “assess colleges’ arrangements with OPMs for potential violation of the incentive-compensation ban,” the report says.

Current instructions to auditors, who conduct annual compliance reviews for colleges participating in federal student-aid programs, don’t mention online-program managers, or the 2011 Dear Colleague letter that outlined the stipulations for their partnerships with colleges.

And “if guidance relevant to determining compliance is not specifically cited in the instructions, auditors generally do not consider it,” the report notes.

On the other side of the coin, the report suggests that a lack of clarity among college officials about what they are required to share with auditors has led to cases where colleges have “withheld or redacted relevant sections of OPM contracts during program reviews.”

The report makes two key recommendations, which the Education Department says it has accepted and is working on fulfilling.

The current level of oversight has proved problematic for advocates and government officials alike, who have demanded more transparency in a space that has grown rapidly, and often behind closed doors.
Online enrollment in U.S. postsecondary institutions increased 3.5-fold between 2012 and 2020, according to HolonIQ, an ed-tech market research firm. As of July 2021, at least 550 colleges worked with an OPM to support at least 2,900 education programs, the GAO’s report adds.

In general, I expect the OPM sector and their school partners to breathe a huge sigh of relief.

Sens. Elizabeth Warren, Democrat of Massachusetts, and Sherrod Brown, Democrat of Ohio, sent a letter in January 2020 to five OPMs (with a follow-up letter in January 2022) expressing concerns that the popular tuition-sharing model — where an OPM gets a set percentage of revenue generated — disincentivizes lower tuition costs for students, and encourages predatory behavior such as “aggressive and deceptive” recruiting practices.

Concerns of predatory practices have come to bear in several cases. Concordia University, in Portland, Ore., now shuttered, drew ire in 2013 when reports surfaced that its OPM was attracting students with offers of “phony ‘scholarships.’” The Wall Street Journal also reported last year that recent University of Southern California graduates who’d shelled out $115,000 for a master’s program in social work were half earning just $52,000 per year, or less, two years after graduating, and had taken out a median of $112,000 in federal student loans.

Thursday’s report did not note any cases of proven incentive-compensation violations.

Immediate reactions on Thursday to the GAO’s findings were mixed. Trace Urdan, managing director at the consulting and investment banking firm Tyton Partners, wrote in an email that the report included some meaningful call-outs; for example, that the compensation rules apply not only to larger degree programs but to short-term programs such as boot camps as well.

On the whole, though, he said it was “benign,” with “no assertions about students or schools being harmed by these arrangements.”

“I can imagine risk-averse schools being made more risk averse by the added scrutiny,” he wrote, “but in general, I expect the OPM sector and their school partners to breathe a huge sigh of relief.”

The GAO is “squarely in their lane” with this report, said Stephanie Hall, a senior fellow at the Century Foundation. Still, as someone who believes colleges are “getting a bad deal” in today’s OPM market, she wishes the investigators had “expanded their analysis to take a look at what’s happening as a result of that 2011 guidance, going beyond just the cut-and-dried ‘contracts aren’t being monitored.’”

The recommendations may not be a silver bullet, but they are a needed step, said Kevin Carey, vice president for education policy and knowledge management at New America, and a critic of OPMs.

“There are actual quotes” in the report “that say, ‘We don’t look at these things,’” Carey said. “And you can’t investigate something you don’t even know exists.”