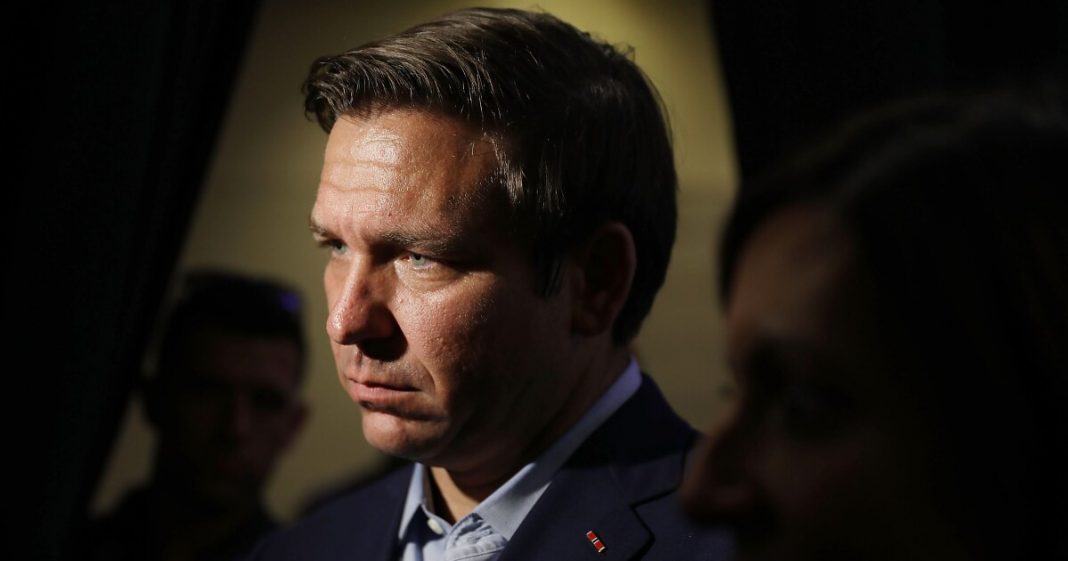 
The U.S. Department of Education has warned Florida officials, in a letter sent on Thursday, that forcing the state’s public colleges to seek new accreditation, as required under a bill passed earlier this week, could mean losing access to federal student loans, Pell Grants, and other forms of financial aid.

“Proposals to amend state law must be drafted and implemented carefully to ensure that they do not put institutions and the students they enroll at risk of loss of eligibility for federal financial-aid programs,” says the letter, which was sent to Gov. Ron DeSantis, a Republican, who is expected to sign the bill into law.

Bryan Griffin, a spokesman for the governor, said DeSantis continued to support the legislation. “We love the bill — higher-education institutions should be held accountable,” Griffin wrote in an email to The Chronicle.

The State Board of Education, which oversees Florida’s 28 public colleges, also received a copy of the department’s letter. The board did not respond to a request for comment..

The Board of Governors, which oversees the state’s 12 public universities, did not comment in time for publication.

The Education Department raises three issues in its letter, notably that any college applying to a new accreditor must get approval from the secretary of education and demonstrate a “reasonable cause” for that change. The process is intended to “prevent institutions from changing accreditors in search of lower standards, which may be implicated here,” says the letter, which was signed by James R. Kvaal, the under secretary of education. Since the bill may be the first of its kind, it’s not clear whether a requirement under state law would be considered a reasonable cause.

In addition, the letter says, federal regulations prohibit any college from changing accreditors if it is under any kind of sanction from its current accreditor. That includes actions that don’t necessarily result in the removal of accreditation, such as show cause or probation, though no public college in the state is now under sanction from its accreditor.

Colleges must also be voluntary members of an accrediting organization, the letter explains, but “it is not clear to the department that Florida institutions seeking a new agency, and the agencies accrediting them, would meet the voluntary requirement.”

If an accreditor accepted a college that was not applying voluntarily, it could lose federal recognition and could no longer serve as a gatekeeper for federal student aid — a key role performed by accreditors. That could be a big disincentive for other accrediting organizations to accept Florida colleges as members.

The letter also raises questions about a provision in the legislation allowing any college in the state, public or private, to sue an accreditor if the institution is “negatively impacted by retaliatory action,” according to the bill’s language. “Any dispute involving a final denial, withdrawal, or termination of accreditation” must first go through arbitration before any other legal action could be taken, the department wrote. The possibility of such a legal challenge could be another disincentive for other accreditors to accept Florida colleges as members.

If a college did sue, the lawsuit would probably be moved to a federal court, where judges generally defer to the decisions of accrediting organizations, said Jan Friis, senior vice president for government affairs at the Council for Higher Education Accreditation.

The department also repeated concerns from accreditation experts that the bill would be costly and an administrative burden for many institutions.

Florida’s Legislature gave final approval on Wednesday to the bill, which also would allow the Board of Governors to call for post-tenure review every five years. Republican lawmakers, who overwhelmingly supported the measure, argued in support of it that the Southern Association of Colleges and Schools’ Commission on Colleges, the accreditor that currently oversees all the state’s public colleges, has not done enough to raise student performance.

Democrats, who largely opposed the bill, and national higher-education experts warned that it was ill conceived and could lead to unintended consequences, such as the possible loss of access to federal student aid.

Critics of the measure see it as retribution for the accreditor’s inquiries about academic freedom at the University of Florida and political interference in the presidential search at Florida State University.

Belle S. Wheelan, president of the commission, wrote in an email to The Chronicle that the department’s letter was warranted, to ensure that colleges follow federal higher-education law.

“I can certainly understand why Secretary Kvaal would have concerns about the impact of the Florida legislation on an institution’s accreditation,” Wheelan said.

Federal officials said they were still evaluating the situation. “The department will continue monitoring this issue,” Kvaal said in a written statement to The Chronicle, “including if it compromises the integrity of the accreditation process and its impact on students.”

Previous articleOH MY – NeverTrumper Suggests Mitt Romney Would Be a Great Choice for President in 2024
Next articleTrump returning to Georgia to campaign with David Perdue, Herschel Walker
- Advertisement -