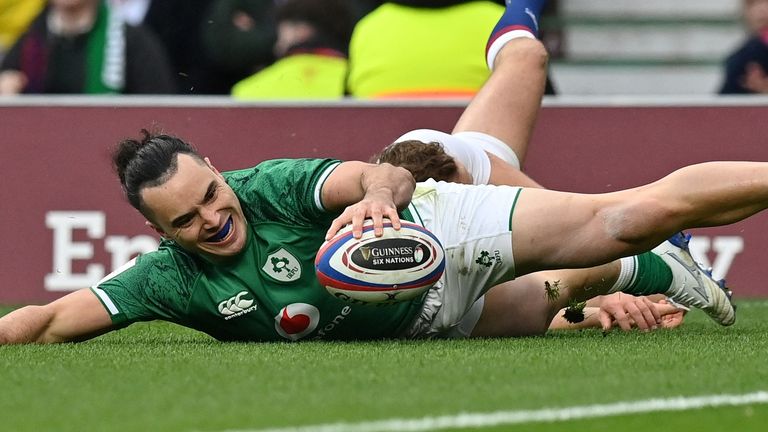 By Michael Cantillon at Twickenham

England second row Charlie Ewels was shown the earliest red card in Six Nations history as Ireland eventually notched a 32-15 victory at Twickenham to remain in the title hunt.

Ewels was sent from the field by referee Mathieu Raynal just 82 seconds into Saturday’s contest, having made an upright, head-on-head tackle on Ireland lock James Ryan, before James Lowe, Hugo Keenan, Jack Conan and Finlay Bealham scored tries for the visitors as they registered a bonus-point win.

Ireland captain Johnny Sexton added two penalties and three conversions in what was likely to be his final appearance at Twickenham in the championship, and though the boot of Marcus Smith kept a physical England in touch, the task proved too tall an order in the end.

Ireland started brightly with ball in hand, as Lowe carried for big metres down the left and the visitors got into their continuity game early. Amidst the play lock Ryan was taken out by a head-on-head collision by opposite number Ewels, who saw red after a TMO review.

Ryan departed and would not return, as Sexton registered his first points of the Test off the tee from the forthcoming penalty.

Tom Curry was passed fit to start for England after concussion, while Sam Simmonds began at No 8 with Alex Dombrandt having only recovered enough from Covid-19 to start among the replacements. Joe Marchant replaced Elliot Daly at 13, while Jamie George started in place of the injured Luke Cowan-Dickie (knee) at hooker.

Ireland made six changes to the side which dispatched of Italy in Round 3, as full-back Hugo Keenan, wing Andrew Conway, centre Bundee Aki, and second row James Ryan returned. Skipper Johnny Sexton was fit enough to start at Twickenham, while Cian Healy replaced the injured Andrew Porter at loosehead.

In the sixth minute, further early damage came England’s way when Lowe sprinted in for the opening try after Ireland hooker Dan Sheehan and openside Josh van der Flier combined to set him away into space.

Sexton’s conversion fell wide across the face of the posts, but Ireland thought they had a second try in the 13th minute when Doris finished an incessant period of pressure to score in the same corner Lowe had before him, viciously handing off England’s Harry Randall.

On review with the TMO, Garry Ringrose was found to have knocked on the ball in the lead up under pressure from Maro Itoje, however, and England survived.

Tom Curry limped off soon after, but England’s scrum was finding joy from referee Raynal as a second penalty at the set-piece handed Smith his first chance for points, which he struck low and hard through the uprights.

Tadhg Beirne knocked on Ireland’s next promising attacking spell, before a pretty blatant Joe Marchant forward pass was missed by the officials for England down the other end as the hosts earned a five-metre attacking lineout chance. Ireland’s defence was rock solid to keep England out and clear their lines though.

Strong maul defence from Itoje turned over Ireland just outside the England 22 approaching the half hour, before consecutive penalties against the visitors – Cian Healy and Iain Henderson at scrum and maul respectively – presented Smith a second attempt which he should have converted, but missed wide.

The young England playmaker was presented with another kick moments later, as Sexton was caught offside, and this time Smith would not miss to reduce the Ireland lead to two points.

A high tackle by Itoje on Ringrose saw Ireland back into the England 22, and with three minutes left of the opening period, Keenan flew over for their second try as scrum-half Jamison Gibson-Park took an intelligent quick-tap penalty under the posts before shipping the play wide.

Sexton converted crisply but England would have the final say of the half through Smith’s third penalty after Jack Nowell had done well to recover the restart and Henderson was caught playing the ball off-feet.

That left things 15-9 to Ireland at the break, but their second-half restart was fumbled, Lowe failed to pass with two overlaps on and a Beirne offload knocked on after Gibson-Park had tapped and ran a very kickable penalty.

The first scrum of the second half brought another England penalty to compound Irish frustration, and though a remarkable Andrew Conway 50:22 got them back onto the front-foot, another knock on followed in the 22 as Tadhg Furlong sought to offload.

A fifth England scrum penalty allowed them to clear the danger, before Marchant forced a breakdown penalty at the other end and Smith notched his fourth effort for 15-12.

Yet another scrum penalty for England followed – this time in attack after Freddie Steward had forced a Keenan knock on – allowing Smith, quite implausibly, to level the game from close range.

A second exquisite Conway 50:22 provided Ireland which much-needed territory, and when Itoje was penalised for cynical play near the try-line with 14 minutes left, Sexton kicked the away side back into a slender lead.

Ireland should have killed the game when Doris sprinted through thereafter but his inaccurate offload to Murray was knocked on. With eight minutes to go, Ireland finally did wrap up the Test when Conan crashed over.

England conclude their 2022 Six Nations campaign with a visit to face France in Paris next Saturday, March 19 (8pm kick-off GMT), with Les Bleus seeking a first Six Nations title and Grand Slam since 2010.

Ireland, also in action next Saturday on the tournament’s final day, face Scotland at the Aviva Stadium in Dublin (4.45pm kick-off GMT), and after Saturday’s victory at Twickenham, will be in the title mix.