EXCLUSIVE: Maricopa County Supervisor Bill Gates Continues to Play Victim and Refuses to Turn Election Routers Over to Inspectors… Why Is That? (VIDEO0 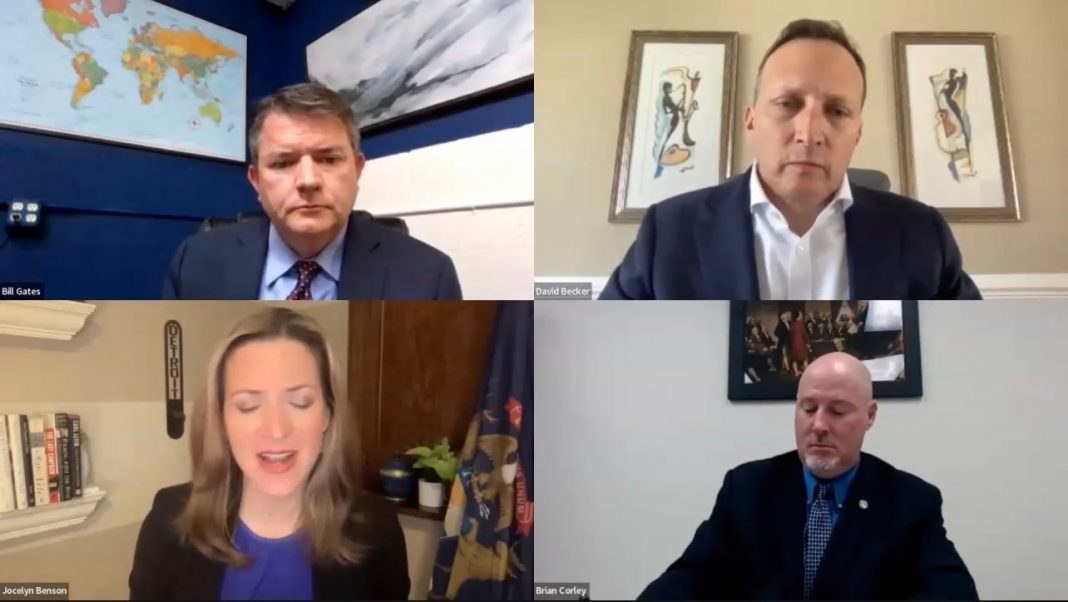 The Gateway Pundit received this video from WeThePeopleAZAlliance.

The video conference took place on March 3rd, 2022, the same day that the disastrous HB2839 was passed in Arizona. This bill replaces precinct committeemen elections with appointments by the Board of Supervisors to unseat MAGA patriots from party leadership. The Gateway Pundit reported that this is a recycled John McCain tactic, instituted by RINOs, to make the Republican Party more accepting of RINOs.

Paul Fagan introduced the panel members for McCain Institute, which is dedicated to carrying on the legacy of RINO Senator John McCain.

These people are the biggest never-Trumpers in America.

The Panel was moderated by David Becker, a far-left radical, who organized the creation of the Electronic Registration Information Center (ERIC). The Gateway Pundit has covered the controversial ERIC organization extensively.

She then directed $11.8mil to two Democrat PR firms. TGP also reported how Becker founded the (EOLDN) to help election officials with lawyers who would fend off legitimate claims of election fraud. Arizona’s election officials also used the ERIC database.

Now, they’re all appearing on a panel together to cover up the rigged 2020 Presidential Election.

This panel aimed to discredit evidence of election fraud and claim the 2020 election was “the most secure, transparent, and verified election in history.”

The panelists repeated the debunked lies that Russia influenced the 2016 election and that 2020 was the most secure election in history.

They even compared the invasion of Ukraine to the struggles elections officials in America face, covering up the fraudulent election.

Bill Gates: I really want to thank the McCain institute for inviting me. As an elected official in Arizona for 12 years, I spent a lot of time with John McCain. And I gotta tell you, that’s one of the things I’ve thought about a lot in the last two years is, what would John McCain say? What advice would John McCain have given me and my colleagues as we’ve dealt with this?

So again, this constant drumbeat that we are somehow complicit in a criminal enterprise to throw this election to Joe Biden, and in fact, we have been investigated now for several months by the Attorney General, Republican Attorney General Mark Brnovich. The reason he is doing this criminal investigation is because the president of our State Senate, Karen Fann, sent the cyber ninja report to him and asked that he do a criminal investigation. We continue to deal with that criminal investigation on a daily basis. One of my colleagues, Clint Hickman, who also owns a very successful egg company with a lot of chickens. You may have seen some things sent out by The Gateway Pundit where they claim that Clint Hickman, and I’m not making this up, fed the ballots to his chickens and then set the farm on fire. And that story was just reposted on my Facebook yesterday by someone I went to high school with. So that’s what we’re dealing with. And she didn’t post it there as a joke. The threats have come to Maricopa County itself. The Attorney General threatened to take over $700 million in state-shared revenues away from Maricopa County, which would have put us out of business because we refused to turn over routers at the request of President Trump. These routers had sensitive information that would have put law enforcement operations in peril.

The attacks continue. My colleagues and I are literally called traders on a daily basis, and now, I have great concerns about the future. We now have one of the leading candidates for Secretary of State on the Republican side this year in 2022 is none other than Mark Finchem who was at the US Capitol on January 6th and has made it very clear what his intent will be if he is elected Secretary of State. I was honored to go and testify with you, David, in front of the House Oversight Committee to tell our story of the good election that our election workers ran. And now, on a daily basis, there are posts on social media that I “lied in front of Congress,” and that I should be prosecuted for lying in front of Congress. Obviously no basis for that at all. Additionally, four of the members of the Board of Supervisors faced a recall effort. Fortunately, that was not successful. And additionally, one of our colleagues was forced to resign after he was recorded making comments about the Maricopa County audit.

As everyone has said here, it was an outstanding election that was run in 2020 in Maricopa County, so we’re standing up for their work. And I think humbly you know that that may be part of why we’ve been able to keep this team together because they’ve seen us, they’ve seen Stephen Richer, our new recorder and just for those who don’t know Stephen Richer, as David mentioned, he beat Adrian Fontes, the Democrat recorder in 2020. Stephen Richer’s fingerprints are not on the 2020 election at all. He could, as a politician, say, “You know what? I wasn’t involved in 2020. Hey, there’s questions. There’s questions, but you know what? I’m going to run a better election in 2022 working with the Board of Supervisors.” But that’s not what he’s done. In fact, he’s run into the building. Okay. He has run into the building. He has stood up for his workers time and time again. I mean, for me, this was the election that I helped oversee. Okay, so I’m a little biased. I’ll admit it. I’ll admit it. Stephen is not. That is remarkable.

Listen to the rest of Bill Gates’ nutty comments below.