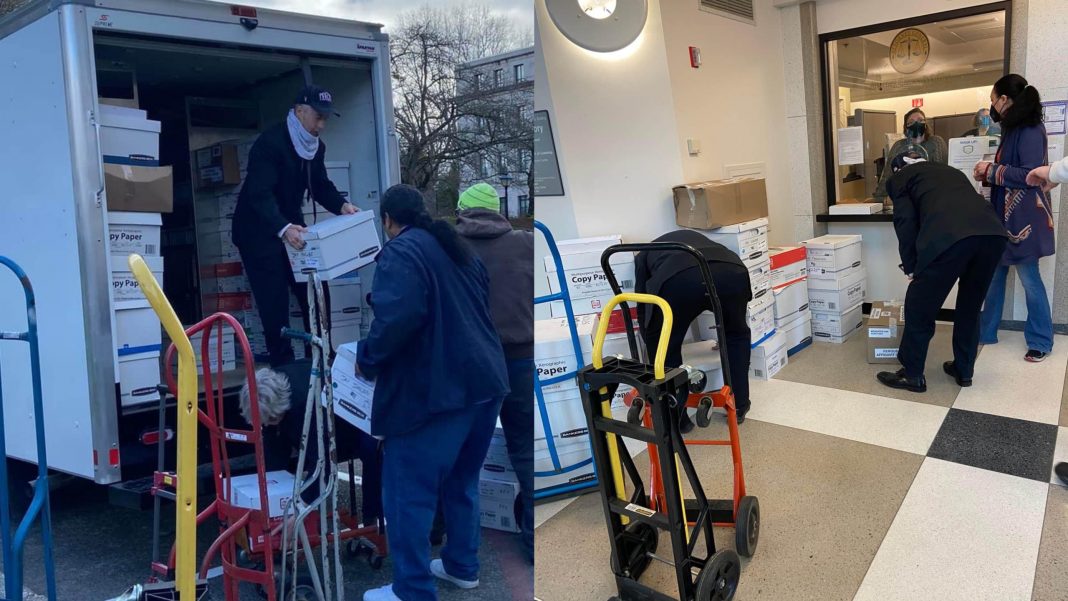 
On Friday, March 4, 2022, the Washington State Tea Room, a monumental state-wide movement, attempted to serve Washington state officials with over 30,000 lawful affidavits from the Citizens of Washington demanding an end to all mandates and requesting a forensic audit of the 2020 election.

Speaking to the Gateway Pundit, the founder of WA State Tea Room, Brianna Mattes said, “this recent serving is the first of two in the first phase of our mission.”

Read the excerpt below:

The leaders of the Washington State Tea Room are ready to speak on their movement, and what they have been putting into play here in Washington state, to take the power back for the people of Washington. We have kept it under the radar till now for logistical reasons but it’s time to share the news far and wide.

This is both monumental and historical for Washington state and, as the largest movement in WA state, we have very big things to come and crazy momentum. This is only the beginning and high time for the people of Washington to have their voices heard by our state government, who has rejected our constitution a long time ago. And who has refused to listen to the People for a very long time. It is time to stand and we are ready!

This movement has brought about hope and action in the people all across this state, as they have stood in the thousands to join their voices, via these sworn and notarized affidavits, with countless others from every corner of Washington. And it is the honor of the WA State Tea Room team to take their voices to our government, in this first phase of our mission.

According to their news release, Inslee’s office refused to accept service or sign for the documents as well as the AG Fergusons office, Jinkins’ office, Murray, and Cantwell’s offices. Only Lt. Governor Heck’s office signed for the documents and took service.

Read the news release below:

Olympia, WA (March 4th, 2022) process servers and members of the Washington State Tea Room attempted to serve Governor Jay Inslee, Lt. Governor Denny Heck, Speaker of the WA House of Representatives Laurie Jinkins, Attorney General Bob Ferguson, and Senators Patty Murray and Maria Cantwell with over 30,000 lawful affidavits from the Citizens of Washington demanding an end to all mandates and requesting a forensic audit of the 2020 election.

Days prior to the process servers made the necessary arrangements to request service and were informed by each state-level elected public servants’ office that their offices would be open and would take service of the documents. None of the offices for either Cantwell or Murray would answer their phones or return calls.

“They didn’t even respect us enough to come out and speak to us directly,” Brianna Mattes stated after being met by clerks and security guards at the offices which refused service. Each attempt to serve was recorded live.

You can watch the other live feed here

You can visit the WA State Tea Room Facebook group for more photos, videos, information, and for the latest updates.

Previous articleJill Biden Says Trump Brought 4 Years of Chaos to US, Claims Joe Biden ‘Is the Right Person For This Moment in History’
Next articleSupreme Court Allows Democrat-Gerrymandered Election Maps in North Carolina and Pennsylvania to Stand
- Advertisement -