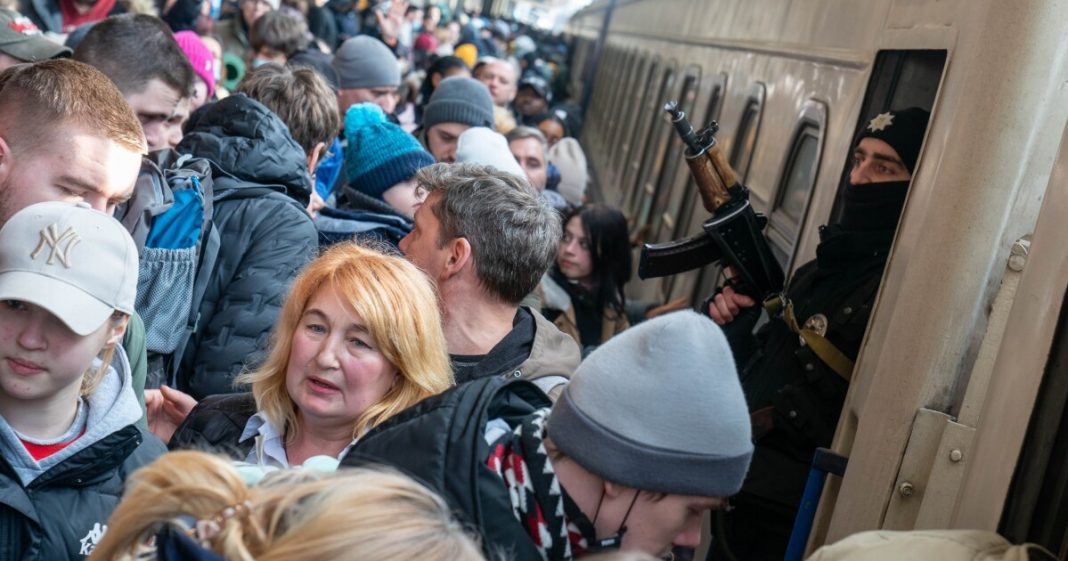 
Higher-education groups are among nearly 200 organizations calling for special protections for Ukrainian students at American colleges — while some members of Congress are advocating for the expulsion of their Russian classmates.

Meanwhile, the Massachusetts Institute of Technology announced it was cutting ties with a Russian university it helped found, one of many ways the war in Ukraine is reverberating across American higher ed.

In an interview on CNN, Rep. Eric Swalwell, a California Democrat and a member of the U.S. House Intelligence Committee, proposed “kicking out” Russian students at American colleges in retaliation for the invasion of Ukraine. “Frankly, I think closing their embassy in the United States, kicking every Russian student out of the United States ⁠— those should all be on the table,” he said.

How on earth would removing innocent students, most of whom stand in opposition to Putin’s practices, help anything?

Ronald B. Cushing, U. of Cincinnati

In a text-message exchange with a reporter from the San Francisco Chronicle, Swalwell, a Democratic hopeful in the primaries for the 2020 presidential election, stood by the controversial idea, which he said came from current and former intelligence-community members. “If their people feel isolated from the world, the opposition inside the country will grow,” Swalwell said.

Another Democratic congressman, Ruben Gallego of Arizona, agreed with Swalwell in a tweet: “These Russian students are the sons and daughters of the richest Russians. A strong message can be sent by sending them home.”

About 5,000 Russian students were enrolled in American colleges in the 2020-21 academic year, according to the Institute of International Education.

There is little recent precedent for the broad-based expulsion of international students based on nationality. In 2018, President Donald J. Trump reportedly considered, then shelved, a plan to bar all students from China, the top source of foreign students in the United States. (Russia, by contrast, doesn’t rank in the top 25 countries in the number of students sent to the U.S.)

Fearful of the plan’s economic and diplomatic implications, the Trump administration instead put in place narrower measures tied to national-security concerns, including restricting visa lengths for Chinese students in some graduate fields and denying student visas to graduates of some Chinese universities believed to have ties to the country’s military.

Likewise, there was no blanket deportation of students from Saudi Arabia after the September 11 terror attacks, although some students from the Middle East did choose to return home, saying they felt unsafe in America.

In the years following the attacks, stepped-up security vetting made it tougher for students from Saudi Arabia and elsewhere to get visas. The numbers of Saudi students on American campuses fell 44 percent between 2001 and 2004, before they began to tick up, thanks, in large measure, to a Saudi-government scholarship program that sought to send more students abroad to combat extremism and build international ties.

One international-education veteran, Ronald B. Cushing, director of international services at the University of Cincinnati, said there hadn’t been a mass removal of international students from the United States in his 30 years in the field. “I can’t even recall that being discussed,” he said. “How on earth would removing innocent students, most of whom stand in opposition to Putin’s practices, help anything?”

Miriam Feldblum, executive director of the Presidents’ Alliance on Higher Education and Immigration, also criticized the proposal. “International students should never be used as pawns in any geo-political fight, and this includes Russian or Chinese students,” she said. “To the contrary, international education is a lifeline to the future, and we should protect, not pillory, international students.”

But even if the expulsion idea does not gain broader traction, Russian students could still be affected by the continuing hostilities. The tensions have made it more complicated for Russian applicants to get student visas, and economic sanctions and banking restrictions could make it more difficult for them to pay tuition.

Ukrainian students in the United States could also be caught in the conflict back home. Feldblum’s group is among a long list of educational, humanitarian, religious, and other groups that have signed a letter asking the Biden administration to approve Special Student Relief for Ukrainian students, which would provide them with additional flexibility, permit off-campus employment, and prevent them from losing their F-1 visa status. Nearly 2,000 Ukrainian students currently study at American colleges.

In addition, the organizations urged officials to announce “temporary protected status” for Ukrainians in the United States, giving work permits and protection from deportation to those who cannot safely return to their home country. It could help new graduates stay legally after their studies are completed.

In a separate letter, a dozen higher-education associations called on the administration to “provide as much flexibility and support as possible for Ukrainian students and scholars currently in the United States, and for students and scholars seeking to leave Ukraine during the current crisis.”

The Institute of International Education announced on Monday that it was accepting nominations for emergency grants of $2,000 to $5,000 for students whose ability to continue to pay for their studies has been affected by the crisis in Ukraine.

American universities’ research ties with Russia and Ukraine are also being strained by the conflict. Over the weekend, MIT said it would dissolve its partnership with Skolkovo Institute of Science and Technology, or Skoltech, a graduate research university near Moscow it helped start.

In a message to the MIT community, President L. Rafael Reif said that the decision to terminate its agreement with Skoltech came with “considerable sadness” but that the “actions of the Russian government made our choice clear.” The partnership had been criticized by some because of ties between Skoltech’s leaders and the Russian government.

Reif, himself the son of refugees from Ukraine, said arrangements would be made to allow current graduate students to complete their research and academic work. He highlighted some of the scientific research produced by the two institutions during the decade-long collaboration.

MIT officials said they weren’t aware of any MIT researchers or students at Skoltech.

The MIT partnership is one of the most prominent institutional relationships between American colleges and Russian partners. Bard College, which worked with St. Petersburg State University to create Smolny College of Liberal Arts and Sciences, was blacklisted last year by the Russian government and prohibited from any operations or activity in the country.

The hostilities could affect other research collaborations. Already, the German government has suspended its research ties with Russia, while the British government is reviewing all research funding with Russian beneficiaries.

There are also deep concerns about the toll the fighting could take on Ukraine’s universities. The United Nations estimates that a half-million Ukrainians have fled the country in the past week, and academics around the globe have begun to mobilize to take in displaced scholars and students. Yuliya Komska, an associate professor of German studies at Dartmouth College, said on Twitter that her institution was fast-tracking admission of Ukrainian scholars into graduate programs and shared advice for other colleges seeking to provide emergency humanitarian admissions.

In other news related to the conflict and higher ed:

For Biden’s Loan-Forgiveness Plan, a Flurry of Lawsuits, a Rollback, and a New Sticker Price