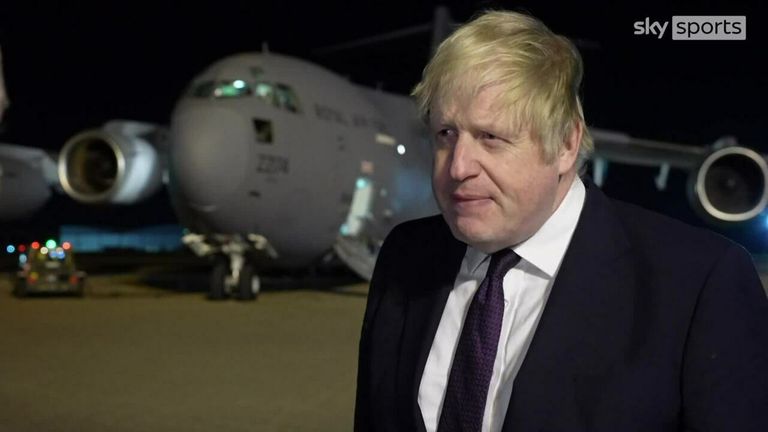 
The English FA has held private conversations with UEFA and FIFA, urging them to ban Russia from the upcoming men’s World Cup and Women’s Euros, Sky Sports News understands.

The English, Scottish and Welsh FAs confirmed publicly on Monday they will refuse to play matches against Russia at any level of the game – whether or not they play under a changed name.

FIFA announced on Sunday that, for the time being, Russia will play matches under the name the “Football Union of Russia”, and will not be able to show its flag or play the Russian national anthem.

That has led to anger among many European football authorities, who feel such measures are inadequate in the face of Vladimir Putin’s aggression in Ukraine.

The English FA shares that opinion, and has made it clear to both UEFA and FIFA that it thinks expulsion for Russia is the only proper course of action.

It is thought UEFA is currently holding discussions about whether to take tougher action against Russia, specifically with this summer’s Women’s Euros in mind.

Sky Sports News has been told that FIFA and UEFA are conscious that there are several months before the Euros in July and the World Cup in November, and that the international picture could have changed dramatically by then.

A unilateral ban on Russia playing international football, they believe, could be inappropriate if, for example, Russian forces were to withdraw quickly from Ukraine, or if Putin was to be overthrown in the coming weeks or months.

The European and World governing bodies have also been told there is the potential that they may be sued by Russia, if they do not have a watertight legal case for a ban.

Nevertheless, international pressure is growing, and UEFA and FIFA have been left under no illusion about the strength of feeling, particularly in Europe, against any Russian participation in international football at this time.

The English FA had earlier said that they will not be playing Russia under any guise – including under a new name as suggested by FIFA.

The decision has been made “out of solidarity with Ukraine and to wholeheartedly condemn the atrocities being committed by the Russian leadership”, the England FA said in a statement.

It indicates England will refuse to play Russia in both the World Cup in Qatar and the Women’s Euros this summer, should the sides be drawn against each other.

The Football Association of Wales (FAW) said it “stands in solidarity with Ukraine and feels an extreme amount of sadness and shock to the recent developments in the country”.

The Scottish Football Association has confirmed that Scotland will not play any fixtures against Russia for the foreseeable future.

The Football Association of Ireland also released a statement on Monday offering its “full and unequivocal support” to the Ukrainian federation and saying its teams would not face Russia at any level until further notice.

The Republic of Ireland men’s team are due to face Ukraine twice in June in the UEFA Nations League. The match in Dublin is due to be played on June 4 before the return match on June 14, which – as things stand – would be played on neutral territory.

The FAI has said it will be as “flexible and accommodating as possible” over the staging of those two matches.

FIFA has also warned Russia they will be banned from all international football if the war does not stop.

Following a meeting of the FIFA Council on Sunday, it was confirmed:

A statement read: “FIFA will continue its ongoing dialogue with the IOC, UEFA and other sport organisations to determine any additional measures or sanctions, including a potential exclusion from competitions, that shall be applied in the near future should the situation not be improving rapidly.”

Poland calls on FIFA to ban Russia from World Cup 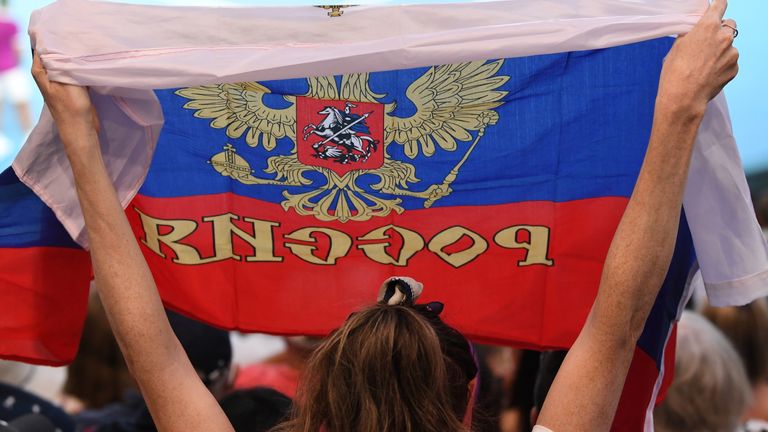 Speaking on Sky News, the Shadow Secretary of State for Digital, Culture, Media and Sport, Lucy Powell, called for Russia to be excluded from all upcoming sporting events

FIFA also said it “will remain in close contact to seek to find appropriate and acceptable solutions together” after Poland, Sweden and Czech Republic all refused to play their World Cup play-offs with Russia in opposition to the invasion of Ukraine.

Poland are due to play in Russia on March 25, with the winner facing Sweden or the Czech Republic four days later for a place in the finals in Qatar in November.

Following FIFA’s statement, the Polish FA once again insisted they would refuse to play against Russia “regardless of the name of the team consisting of Russian footballers and the place of the match”.

It called on FIFA to ban Russia from the 2022 World Cup in Qatar.

A statement from the Polish FA read: “In the face of the Russian invasion of Ukraine, which was condemned almost all over the world, this is the only decision we can make.

“At the same time, we call on the FIFA authorities to react immediately to the brutal violence that we observe daily on the territory of independent Ukraine. If FIFA’s Human Rights Policy is more than just words on a paper now is the time to put it into practice by excluding the Russian Football Association from the qualifiers for the World Cup in Qatar in 2022.”

The Polish FA has also written to all 55 European football associations, urging them to declare that they will not play against Russia.

The Swedish Football Association has also been quick to condemn FIFA’s decision.

“It is clear that we are not satisfied with this,” Swedish FA president Karl-Erik Nilsson told Fotbollskanalen.

“Our opinion is not different today and the situation has not changed in Ukraine just because we have received the message from FIFA, so we have no other opinion today.

“We also want to talk to Poland and the Czech Republic so that we can give back to FIFA what we think, but we had expected a sharper stance from FIFA. We would have done so.”

The Swiss FA has told Sky Sports News its teams will not play any form of a Russian side at international football until further notice.

It says its position is “non-negotiable” and it includes the scheduled UEFA Women’s Euro group match against Russia in England this summer.

A spokesperson said: “SFA condemns Russian attack on Ukraine and will not play against Russian national teams until further notice

“The SFA condemns the Russian attack on Ukraine, which not only blatantly violates international law, but also the universal values of football, such as the promotion of friendly relations, as propagated in the FIFA Statutes. Our concern is for the people affected in Ukraine, especially the Ukrainian Football Association and all its members.

“The SFA supports the position of the associations of Poland, Sweden and the Czech Republic, which are calling for the exclusion of the Russian men’s national team from the play-offs for the 2022 FIFA World Cup in Qatar. In solidarity with these associations, the SFA will not play any competitive or friendly matches against Russian national teams until further notice.

“If necessary, this non-negotiable position of the SFA explicitly extends to the first match of its women’s national team at the UEFA Women’s EURO in England on 9 July 2022 against Russia.”

The Czech FA has also told Sky Sports News that its stance on playing against Russia remains the same, despite FIFA’s announcement – no Czech Republic side will play against Russia or the ‘Football Union of Russia’.

A spokesperson said: “The Executive Committee of the Czech FA unanimously decided at its extraordinary meeting on Sunday 27 February that the Czech national team will not play in the play-offs of the 2022 World Cup qualification against Russia.

“The position of the Czech FA and the Czech national football team remains the same even if Russia could play the match on neutral ground, without a flag, anthem or under the banner of the Football Union of Russia.”