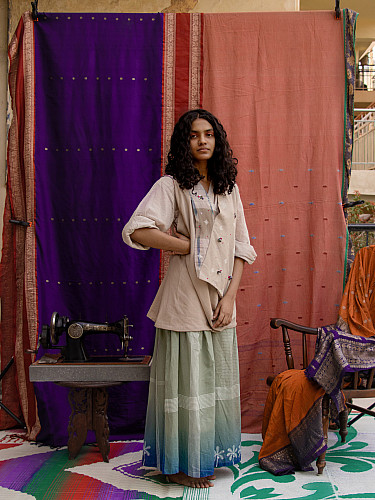 How would you introduce your graduate collection?
Baara Thangi is an amalgamation of the past and the present; it is steeped in nostalgia and yet has elements that bring out the quirkier graphic aspects of who I am today. This Pre-Fall collection puts craft at its centre, with an emphasis on hand embroidery, hand block printing and hand quilting, and appeals to anyone who would appreciate a slower, more conscious approach to life.

“Baara thangi” literally translates to “come, sister” in Kannada; it’s a term of endearment, one that takes me back to a childhood defined by a free-spirited way of living. This collection prompts the wearer to pursue a future that values crafts that are timeless and to keep that flamboyant child within alive at all times.

What are the underlying concepts — the primary inspirations — behind your collection?
I seek inspiration from a more sustainable pursuit of living and one that upholds the virtue of upcycling. I drew from my upbringing, and that of a lot of people from my generation, during the early 2000s, in a Bangalore that still had a certain old-world charm to it. I also drew from childhood memories of exquisite kolam patterns [decorative designs drawn on the ground, traditionally with rice flour, in southern India] strewn across jet-black tar roads, the comfort of my grandmother’s cotton saris, stark white kasuti work [a type of counted-thread embroidery practised in northern Karnataka] on heirloom clothing and Madras lungi fabrics, and paired them with quirkier heart motifs, or silhouettes that are geometric and asymmetrical.

Many of my fabrics were painstakingly collected from second-hand sari shops or donated by my grandmother or other relatives back home. It was important to not use any fresh fabric and to reuse fabric waste or textiles that had stories to tell. I also wanted to present textiles and crafts that are common to our everyday existence in a manner that prompts us to look at them through a new lens.

Tell us about the techniques you have used and your design ideology.
My design process began by enriching the narrative that I wanted to bring forth through the collection. This involved the extensive curation of images that then became very detailed mood boards. It was a reflection of how important craftsmanship is to me and represented a seamless blend of textures that could go together alongside a fine-tuning of a colour palette.

I then embarked on a month-long trip to the craft clusters where these traditions hail from. I first went to lungi-weaving clusters around Cuddalore, in Tamil Nadu, where Madras checks are woven for export. I understood the effort that went into creating something that I had taken for granted while growing up — the humble lungi now had so much more to tell.

I also visited Ilkal, in northern Karnataka, where the famous Ilkal saris are woven and traditionally finished with kasuti work. Here, again, motifs and techniques that had been perfected over centuries came to life in front of me.

I had been simultaneously working on quilting recycled fabrics and putting together fragments of old saris, dhotis and textiles that I had collected through my time at NIFT. The silhouettes that I had in mind drew extensively from minimal-waste pattern-making and had a geometric asymmetry that was integral to them.

Could you describe your favourite look?
My favourite look comprises a hand-quilted jacket with very detailed kasuti and kolam patterns embroidered on it. The base fabric took over a week to be painstakingly hand-quilted, and this was then overdyed to suit the colour palette. The jacket comprises an asymmetric front panel, attached from each shoulder. These panels have subtle stripes on them, an imitation of a black tar road with kolam. The pattern takes inspiration from the kimono, and the remnants from the basic structure were used to create the collars in an attempt to minimise fabric waste.

The embroidered motifs are scattered — asymmetric and yet balanced. Lilac and bright-pink hearts add that much-needed pop of colour and give life to a quirkier sensibility that I wanted to highlight. Small trinkets made with fabric buttons, metal beads and overdyed lace have been attached at certain places, almost like little secrets waiting to be discovered. The jacket is lined with an overdyed lungi.

The lilac top worn underneath has been made entirely from a repurposed silk sari. Braided tassels from either shoulder are tied at the front, mimicking elements that I’ve observed on children’s clothing. Brightly coloured loop buttons hold the top in place at the side seams.

Block-printed culottes complete the look, and these are held in place at the waist by using lungi fabrics that have been converted into tassels.

Conversations around personal representation are becoming increasingly prominent in today’s fashion world. In that regard, how would you say your work reflects who you are?
As someone who doesn’t dress according to conventional gender norms, I didn’t want to impose the same on my collection. For instance, using the lungi, which is a fabric that is traditionally worn by men, as part of garments that could be worn by anyone, irrespective of gender, reflects the same sentiment.

Which format would best translate your work to the consumer — physical retail spaces, online stores, demi-couture, or purely as a form of visual consumption through images only?
My work is very textural. It would be best translated when exhibited in a physical space, whether it is a retail store or an exhibition of some sort. These, supplemented by images, videos and other means of virtual display would be ideal. It is very important for me that people actually interact with the clothes and understand where I come from.

How has the shift towards digital fashion affected your creative process?
The shift towards digital fashion is certainly a boon to someone like me, who is geared towards reducing textile waste — it allows me to make changes digitally before implementing them on fabrics. Without access to a lot of resources, working on digital 3D prototypes has been a lifesaver for me. Considering how fast-paced the virtual world is, my creative process gets a boost, and I can enable my vision to be translated onto clothes at a much faster rate.