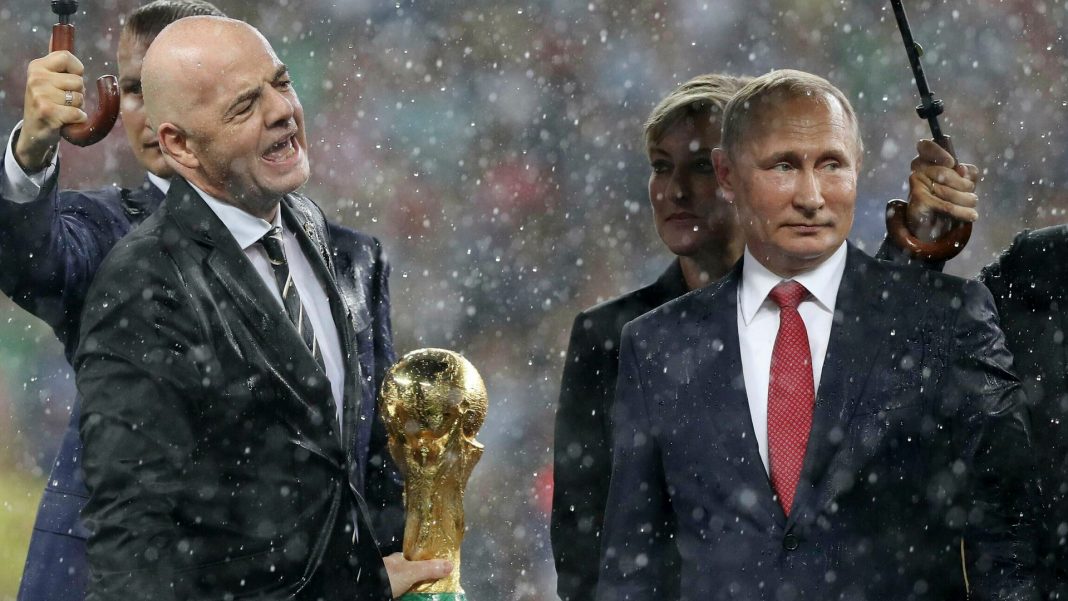 FIFA and UEFA have suspended the Russian national team and Russian clubs from all competitions until further notice.

The suspension means that, barring an unlikely change of course in Russia’s invasion of Ukraine, the country will not be able to face Poland in a World Cup play-off semi-final next month.

UEFA has also terminated its deal with energy company Gazprom, which is majority-owned by the Russian state and is also a major sponsor of the Champions League.

A joint FIFA and UEFA statement read: “Following the initial decisions adopted by the FIFA Council and the UEFA Executive Committee, which envisaged the adoption of additional measures, FIFA and UEFA have today decided together that all Russian teams, whether national representative teams or club teams, shall be suspended from participation in both FIFA and UEFA competitions until further notice.

“These decisions were adopted today by the Bureau of the FIFA Council and the Executive Committee of UEFA, respectively the highest decision-making bodies of both institutions on such urgent matters.

“Football is fully united here and in full solidarity with all the people affected in Ukraine. Both Presidents hope that the situation in Ukraine will improve significantly and rapidly so that football can again be a vector for unity and peace amongst people.”

Spartak Moscow out of Europa League

Following the decision, UEFA confirmed the Europa League last-16 tie between Spartak Moscow and RB Leipzig will not take place, with the German club automatically progressing to the quarter-finals of the competition.

A UEFA statement read: “As a consequence of today’s decision by the UEFA Executive Committee to suspend Russian club and national teams from taking part in UEFA competitions until further notice, the UEFA Europa League matches between RB Leipzig and FC Spartak Moskva cannot take place, and, as a consequence, RB Leipzig are qualified to the quarter-finals of the competition”.

Q&A: What does this mean?

What does latest development mean?

“FIFA have been working closely with UEFA on this. We had the situation on Sunday when the Bureau of the FIFA Council met when they stopped just short of banning Russia.

“They said on Sunday that Russia could still play football but not in the country, but less than 24 hours later, after we’ve had the Polish FA, the Swedish FA and the Czech Republic FA among others coming out saying they would not face Russia, no matter what they’re called or where the games were going to be, FIFA and UEFA have come together and said that we are suspending Russia.

“It’s quite significant that it’s a joint statement as well because in the past, we’ve seen how relations between FIFA and UEFA have not always been very warm but on this issue they are totally aligned.

“We’ve got the World Cup play-off next month with Russia playing Poland but that is now not going to happen. I imagine Poland will go straight into their play-off final against either Czech Republic or Sweden.

“Looking further ahead, we’ve got the women’s European Championship which Russia had qualified for. As it stands, this would mean them not playing in that tournament.”

What is the significance of severing ties with Gazprom?

“Gazprom were UEFA’s biggest sponsor. They were their biggest commercial partner, paying something in the region of £34m a year to sponsor UEFA’s competitions and they have turned around and said, ‘we don’t want your money’.

“We know you are a state-owned Russian energy company and considering what Russia are doing in Ukraine at the moment, we don’t want to be associated with you and we don’t want your money.”

This is a breaking news story that is being updated and more details will be published shortly. Please refresh this page for the latest updates.

Visit skysports.com or the Sky Sports App for all the breaking sports news headlines. You can receive push notifications from the Sky Sports app for the latest news from your favourite sports and you can also follow @SkySportsNews on Twitter to get the latest updates.