Florida International’s President Offered a Subordinate a Gilded World. It ‘Creeped Her Out.’ 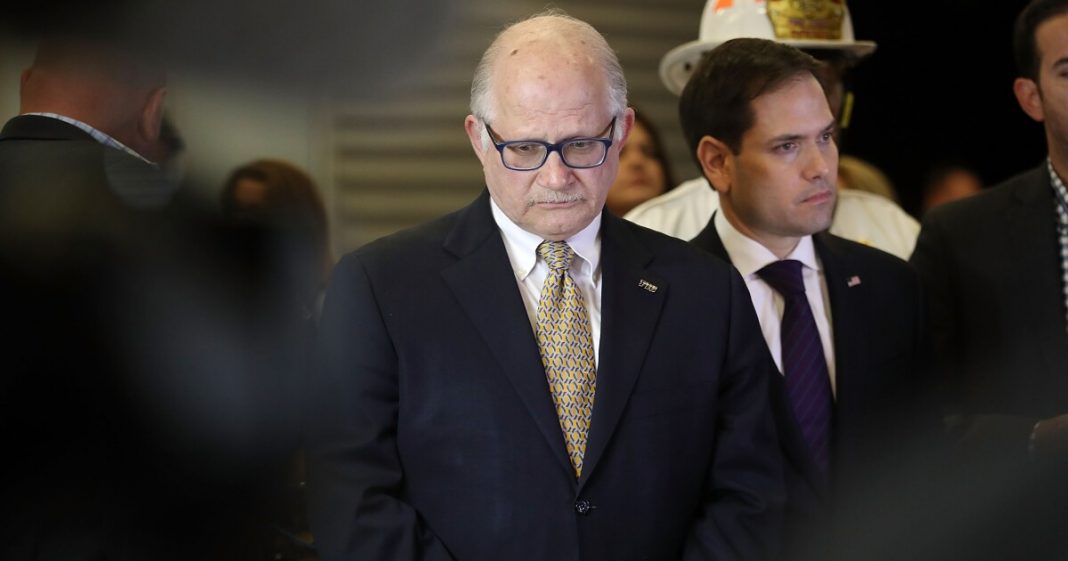 
Before he abruptly resigned in January as Florida International University’s president, Mark B. Rosenberg had made unwelcome overtures toward a significantly younger female employee who worked in the president’s office, according to an outside investigator’s report released on Wednesday. Rosenberg had asked the woman to be his “lover,” bought her shoes, suggested locations to take her on trips, and scoped out an apartment for her in Coral Gables, the woman told investigators, who were hired by the university’s Board of Trustees to review her complaints.

The investigators’ report offers the most thorough accounting to date of what led Rosenberg, who had been president of the university, in Miami, since 2009, to unceremoniously and immediately resign on January 21, citing his wife’s deteriorating health and his own “personal health issues.” Two days later, as rumors swirled and pressure mounted for a fuller explanation, Rosenberg acknowledged that he had “caused discomfort for a valued colleague,” creating an “emotional (not physical) entanglement.”

Eric D. Isicoff, a lawyer based in Miami, led the investigation. The inquiry began after Rosenberg, on December 15, told Dean C. Colson, chair of the university’s board, that “a female employee had made a complaint about him,” the report states. “He related that he had expressed his feelings for her but did not do or say anything else that was inappropriate.” Colson told Rosenberg that there would need to be an investigation.

Rosenberg, who is 72, is a longtime figure in public higher education in Florida, where he served, from 2005 to 2009, as chancellor of the state-university system. The report details how Rosenberg, who has been married to his wife, Rosalie, since 1974, sought to carve out a new life of travel and companionship with a female subordinate. Rosenberg’s wife, with whom he has two children, has a debilitating physical illness and dementia, and she has been unable to care for herself since approximately 2010, according to the report. At the suggestion of a rabbi, Rosenberg sought a Jewish divorce, known as a “get,” that would allow him to have another relationship, the report states.

In October, Rosenberg shared with the female employee his plans to get the Jewish divorce, and asked her if she would “consider being his companion once he stepped down as president,” Rosenberg told investigators. According to Rosenberg, the employee said she would consider the companionship.

“The president stated that they never talked about sex,” the report says, “but that companionship, according to the president, might include sex.”

The report does not identify the woman, who requested anonymity. It states that there is “a big age difference” between her and Rosenberg.

In her interview with investigators, the female employee stated that Rosenberg proposed that, after he had a divorce, she become his “lover.” (Rosenberg “flatly denies” using the term “lover,” the report states.)

Sometime between October 16, 2021 and November 5, Rosenberg invited the female employee for lunch at Reagan House, the president’s residence, which has an event space and offices for the president and some staff members. At lunch, Rosenberg “told her that he was in love with her and wanted to marry her,” the woman told investigators.

“According to the female employee,” the report states, “the president told her she would be taken care of, financially and professionally. The female employee did not tell anyone about that conversation at that time.”

According to the report, Rosenberg denied having ever said he wanted to marry the woman. He told investigators “he was not divorced, may never get divorced and, in any event, does not believe he will marry again,” the report states. As for telling the woman he loved her, “The president stated that it is not unusual for him to tell people he loves them. He thinks he did tell her he loved her, but in a broader context.”

Rosenberg did not respond to an email from The Chronicle requesting an interview.

On November 8, the employee went to lunch with her supervisor, telling her that Rosenberg was “acting ‘weird,’ that he could not handle what was going on in his life and that she wanted to transfer out of the office to another position.”

Weeks later, on December 14, Rosenberg received his Jewish divorce, according to the report. The same day, the female employee told Rosenberg that “she could not work with him anymore, that he was too emotional,” the report states. “He asked her to give him another chance.”

The employee told her supervisor that Rosenberg had “creeped her out,” the report states. “She related that the President had told her that he had feelings for her, that he wanted her to consider being his companion (which she interpreted as being a travel, not physical companion) and had invited her on a trip to New Orleans.” (Rosenberg had written down a list of places to which he and the woman could travel, which she showed to her supervisor, according to the report.)

The employee told her supervisor she did not want to report the incident. The same day, Rosenberg told the supervisor that he had misread the situation with the employee, that he had “messed up” and now she was uncomfortable.

During the investigation, the female employee was placed on paid administrative leave, with her consent. Investigators first interviewed Rosenberg on December 20, but they were unable to interview the female employee until January 19. Once briefed on the employee’s interview, Colson, the board chairman, called Rosenberg, telling Rosenberg “he did not see a way that his presidency could survive,” the report states.

The day after that conversation, on January 21, Rosenberg resigned. The board scarcely acknowledged the news beyond a short public statement.

Colson, the board’s chairman, declined an interview request from The Chronicle on Wednesday.

An Apartment for ‘Princess’

From the investigator’s report, a portrait of Rosenberg emerges that suggests he used the powers of the presidency and his personal wealth to woo an employee who was ultimately uncomfortable with his overtures.

The report describes numerous instances in which Rosenberg offered favors or gifts or appeared, through his communications, to be suggesting an intimate relationship. Some examples include:

According to the report, Rosenberg at one point approached Javier Marques, his chief of staff, about a promotion for the employee. Rosenberg said that he feared she would leave if she did not get a pay increase and a better title. Marques told investigators he “pushed back,” because the woman had received previous salary increases. Human-resources officials similarly objected, Marques told investigators, on the grounds that the woman did not meet the criteria for the title she sought. The employee got a raise and promotion on November 21, but it was not the pay increase or title she wanted, according to the report.

It was around this time that the woman and Rosenberg had dinner at Graziano’s, an Argentinian restaurant. According to the woman, she told Rosenberg that “she was not interested in a relationship with him and wanted a transfer. The president stated that he wanted her to stay on the job and assured her that he would stop any ‘advances.’”

But Rosenberg continued to make the woman uncomfortable, she told investigators.

“She stated that the president started to call her ‘Princess’ and would not leave the office until she did,” the report states. “He would not have lunch without her and started hugging her occasionally during greetings. One day, President Rosenberg brought his lunch into a room where she was taking a French class remotely. Uncomfortable, she went outside to continue her class. The president followed her outside and took pictures of her.”

According to the report, “President Rosenberg flatly denied that he ever called the female employee ‘Princess.” He acknowledged taking a picture of the woman but said he did so because he was concerned she did not have “adequate space in which to work.”

Investigators reviewed text and email exchanges between Rosenberg and the woman, which revealed an informality in their communications.

“When the female employee sent to the president a picture of herself on an airplane,” the report states, “the president responded: ‘Alright. The only thing missing is your radiant smile!!’”

In another text, Rosenberg described the woman as “an amazing person!” In reply, the woman wrote, “Amazing people find each other!!!”

According to the investigator, “the texts demonstrate a professional boundary that was crossed by both.” It was Rosenberg’s responsibility, however, to establish and uphold appropriate boundaries, the report states.

“While the workplace, by no means, has to be sterile to the point of unfriendliness, it is clear here that the president acted in a manner that was unprofessional and that he crossed appropriate boundaries in his behavior towards and interactions with a female subordinate,” the report states. “It is immaterial that the female employee interacted with the president with the same degree of familiarity and lack of formality. It was up to President Rosenberg to set the tone and the boundaries.”

The report renders no explicit opinion as to whether Rosenberg violated any university policies, including Florida International’s sexual-harassment policy. Rosenberg remains a tenured professor at the university. It will fall to the Faculty Advisory Board, the university’s human-resources team, to review the investigators’ findings and determine whether disciplinary action is warranted, ranging from “counseling to reprimand, to suspension or termination,” the report states.