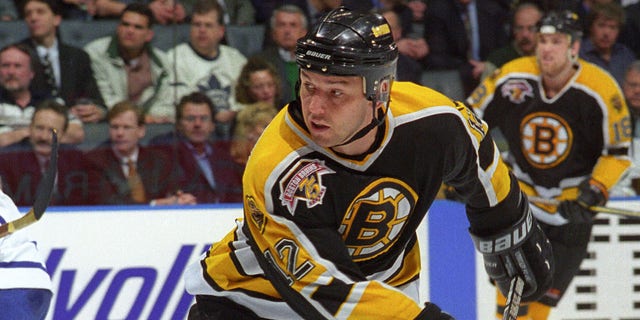 Dmitri Khristich, a longtime NHL player and Ukrainian, is pleading for help.

Khristich, who played in 811 hockey games over his career, is currently in Poltava, which is a city 200 miles away from Kyiv, and it has yet to be invaded by Vladimir Putin’s Russian troops.

“Everywhere — in the east, in the south, in the north — there’s a war,” Khristich told The Athletic. “It doesn’t really matter if we’re safe or not, because the rest of the country is not safe. That’s the main point.”

It’s close to two weeks since Russia invaded Ukraine, and according to the United Nations, there have been over 1,000 casualties. There have been more than 1.5 million Ukrainians who have left their country, including Khristich’s 15-year-old son, Ilya, who left for Poland. Khristich, however, had to stay behind to help protect the country.

Dmitri Khristich #8 #35 of the Washington Capitals skate with the puck during a NHL hockey game on Dec. 16, 1995 at USAir Arena in Landover, Maryland.
(Photo by Mitchell Layton/Getty Images)

Under martial law, if you’re a man between the ages of 18 and 60 you must stay behind.

Khristich and his wife, Oleksandra — a first responder — are doing all they can to contribute, but the former NHL player doesn’t think his country is getting much help from other countries.

“We are just looking at the news and we don’t understand why the West is just sitting and watching how Russians are just destroying Ukraine,” Khristich said. “This is so unbelievable.”

Dmitri Khristich #19 of the Toronto Maple Leafs looks on the ice during the game against the Dallas Stars at the Air Canada Centre in Toronto, Canada. The Maple Leafs defeated the Stars 4-0.
(Getty Images)

And even though other countries have hurt Russia through economic sanctions, Khristich believes it isn’t enough.

“We need help. Like real help,” Khristich said. “You’re going to let us be killed. … We are not here to just sit and watch it.”

The International Ice Hockey Federation (IIHF) suspended the national teams of Russia and Belarus from competing, and the 2023 World Junior Championship will no longer take place in Russia. Also, the NHL has suspended all ties to Russian business partners.

Previous articleLove Is Blind Season 3 Is Closer Than You Think – E! Online
Next articleDancing With the Stars Pro Brandon Armstrong Is Engaged to Brylee Ivers – E! Online
- Advertisement -