George Soros and Hillary Clinton Are Cheering on War with Russia 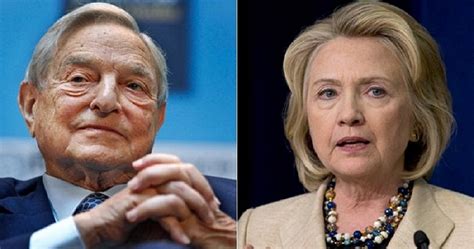 
Let me make this very simple. If you live in the West you have been flooded with a massive propaganda campaign portraying Ukraine as a Jeffersonian democracy yearning to breathe free and Russia has the ultimate evil empire. Not true. Two of the most high-profile voices advocating a fight with Russia are Hillary Clinton and George Soros. Got that? If you are wearing the Ukrainian flag and signing on to this doomed cause you are on the side of Hillary Clinton and George Soros.

Here’s what Hillary said recently on the Rachel Maddow show:

Former Secretary of State and failed presidential candidate Hillary Clinton has called to arm up an insurgency to repel Russia’s invasion of Ukraine, joining a growing number of pundits and officials suggesting that Washington should hand Russia its own costly, years-long occupation akin to the US (or indeed Soviet) experience in Afghanistan.

Clinton made her case during a Monday night appearance with MSNBC’s Rachel Maddow, recalling that during the USSR’s invasion of Afghanistan in the 1980s, resistance fighters “had a lot of countries supplying arms and advice,” which, she continued, “didn’t end well for the Russians.”

“So, I think we have to watch this carefully. We have to provide sufficient military armaments for the Ukraine military and volunteers. And we have to keep tightening the screws,” Clinton added.

And then there is George Soros, who collaborated with the Nazis in World War II:

I have witnessed Ukraine transform from a collapsing part of the Soviet Union to a liberal democracy and an open society. It has faced countless acts of Russian aggression, but has persisted.

Allowing Putin to succeed on his quest will send a message across the world that nations can simply be created or dissolved by brute force. We must #StandWithUkraine, as they stand for us.

The mainstream media, which largely ignores the tidal wave of illegal immigrants flooding our southern border, are quite keen to protect Ukraine’s border. The mainstream media and the political establishment in Washington, DC denounce the “horrors” on the ground in Ukraine but are deaf and mute when it comes to the Trump supporters that are being held as political prisoners in DC jails. Even though there is clear evidence that at least two Trump supporters were killed by police on January 6, there is no credible demand to investigate and hold the murderers accountable.

If you are 38 years old or younger, you probably remember very little about the lies told by the George W. Bush Administration to whip up the fury of the American people and launch an unjustified war in Iraq in 2003. I remember. I have not forgotten.

If you want to stand in solidarity with Hillary Clinton, George Soros, Joe Biden, Anthony Blinken, Jake Sullivan, Nancy Pelosi, Chuck Schumer, Mitt Romney and Lindsey Graham know this–when you lie down with dogs you get up with fleas. And the fleas they are carrying threaten the very security of this Republic.