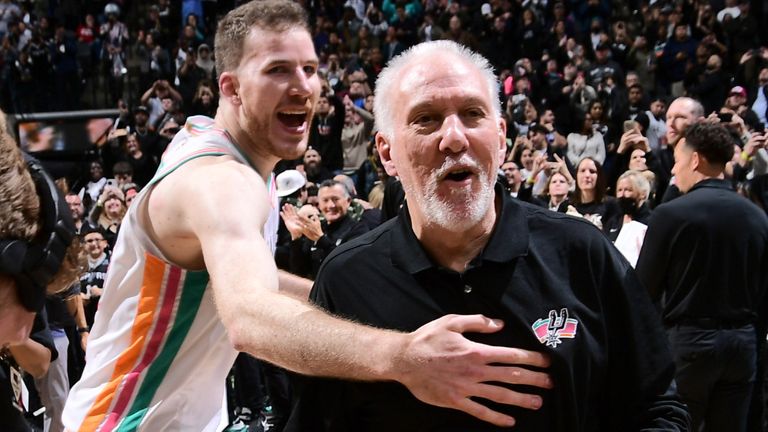 Popovich broke a tie with Don Nelson, the friend and mentor he served as an assistant while with Golden State for two seasons.

The milestone came in Popovich’s 2,030th game and 26th season with the Spurs, the only franchise he has served as head coach.

“It’s just a testament to a whole lot of people,” said Popovich. “Something like this does not belong to one individual. Basketball’s a team sport.

“You preach to your players that they have to do it together and that’s certainly been the case in my life with all the wonderful players and coaches, the staff that I’ve been blessed with, the support of this wonderful city. The fans support us no matter what.

“All of us share in this record. It’s not mine. It’s ours, here in the city.”

Unsurprisingly, the evening was met with zero fanfare. That is, until the end when players mobbed Popovich after the game was over, jumping around and hugging him until he could break free and headed to the locker room.

Popovich was doused with a cooler of water as huge roars could be heard from the locker room as the Spurs celebrated along with Hall of Famer David Robinson.

“Tonight, he had to enjoy it,” Spurs point guard Dejounte Murray said. “He had no option.”

Praise or celebration of any achievement is typically brusquely deflected or simply ignored by Popovich. To hear Popovich explain it, he simply shows up to work and rolls the ball onto the court.

Nothing could be further from the truth.

He is the fourth coach, going back to the end of the NBA’s first season, to stand atop the wins list. Red Auerbach held the mark for about a half-century, followed by Lenny Wilkens, followed by Nelson and now, Popovich.

“The ironic thing about this is Nellie gave me a job when I didn’t have one back in ’92,” Popovich said.

“He took me on. To be in this position, as the same breath as him, is in my opinion undeserving and quite awkward because he was so wonderful in saving my family’s ass. So, it’s ironic that I’m sitting here in this situation.”

Popovich’s first stint in San Antonio ended in 1992, working for Larry Brown until the whole coaching staff got fired. That’s when Popovich got a job as an assistant in Golden State, working for Nelson for two seasons.

He returned to the Spurs in 1994 and took over as coach two years later.

The Spurs released a video from Nelson after the game congratulating Popovich, who he called one of his best friends and telling him how proud he is of his former assistant’s accomplishments.

Popovich has won five NBA championships, 13 division titles and was recently named one of the 15 greatest coaches in league history.

“Gregg Popovich’s success with the Spurs is unprecedented in our league so it’s only fitting that he now holds the record for most career wins,” NBA Commissioner Adam Siler said.

“His leadership and unwavering commitment to the game are widely admired by generations of players and coaches alike. Congratulations to Coach Pop on this latest achievement in his legendary career.”

The Spurs matched a league record with 22 straight playoff appearances but have missed two straight postseasons since their streak ended in 2017.

While the glory days seem distant, the 73-year-old Popovich continues plugging along.

Previous articleUkrainian exchange student in Colorado, age 16, is ‘proud’ of his country amid Russia-Ukraine war
Next articleManchester City have deal in place to sign Erling Haaland from Borussia Dortmund – Paper talk
- Advertisement -