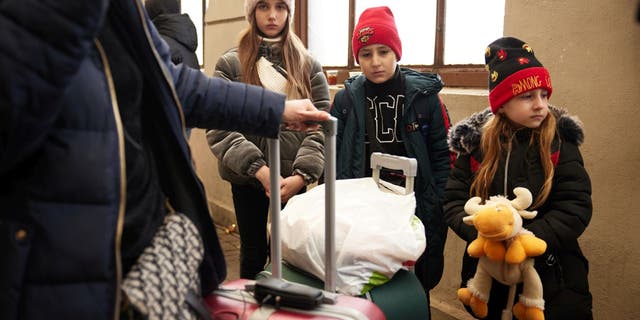 UNICEF is aiming to raise money to help children and families who have become refugees during the Russia–Ukraine war.

About half a million children have fled Ukraine following Russia’s attacks, according to estimates collected by the United Nations.

The intergovernmental peace organization reports that it has verified the deaths of 17 children who were killed from the munition attacks while 30 have been injured. In a press release issued on Thursday, March 3, UNICEF said it’s likely that the child death and injury toll is higher than what’s on record so far.

On March 1, 2022, a family travels with small children to the Lviv-Holovnyi railway station in Lviv, Ukraine as the Russia-Ukraine war continues.
(UNICEF/Viktor Moskaliuk)

“The use of explosive weapons in cities could quickly turn this crisis into a catastrophe for Ukraine’s children,” said UNICEF Regional Director Afshan Khan, who covers the organization’s Europe- and Central Asia-focused operations.

“There are no armed operations of this scale that do not result in children being harmed. The consequences will be tragic,” Khan continued. “UNICEF is on the ground, doing its best to meet children’s basic needs, but the only way out of the tragedy unfolding in Ukraine is for the conflict to end.”

UKRAINE’S CHILDREN: HOW TO HELP VULNERABLE KIDS AMID RUSSIA’S ATTACK

Homes, schools, orphanages, health centers and several other essential service providers have been damaged or destroyed along with critical water infrastructure systems in Ukraine, UNICEF reports.

The organization also intends to scale its response to the Russia-Ukraine refugee crisis in neighboring countries by addressing the “urgent needs of children and families” who have recently crossed border lines.

A part of UNICEF’s relief efforts will go toward building additional “Blue Dot” hubs along transit routes, which will serve as “safe spaces” where children and mothers can get access to the services they need. So far, the organization has operational Blue Dot hubs in Romania and Moldova.

UNICEF currently estimates that it will need $276 million to fund its planned humanitarian efforts in Ukraine along with an additional $73 million to help Russia-Ukraine refugees in surrounding countries.

Donations are being accepted on UNICEFUSA.org.

Karina and her daughter Luna, 3, speak with the UNICEF Regional Director for Europe and Central Asia Afhsan Khan inside the first Blue Dot hub in Romania.
(UNICEF/Alex Nicodim)

UNICEF reports that the Russia-Ukraine refugee crisis could become one of Europe’s largest population displacements since World War II.

Russia began its invasion of Ukraine on Thursday, Feb. 24. The war is entering its second week.