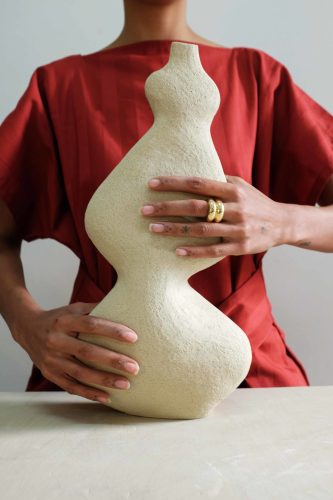 Why ceramics? What initially drew you to this art/craft form?
My professional background is in Visual Design. I went to the National Institute of Design [NID], Ahmedabad, and I have worked for almost 10 years as a graphic designer in India and Germany.

I have also been experimenting for my own creative comfort and have been taking this pleasure rather seriously. But it was in the summer of 2020 when everything was shutting down, and thus also the company I was employed at in Berlin, that all this stuff I was doing alongside really came to the centre of my life. My years of graphic design practices of form and space are not sidelined but help in my process.

What is your process of creation, in physical terms?
I build by hand and don’t use a wheel. I make use of coiling, the oldest technique for making pots, which is basically making thick noodles of clay, laying them on top of each other and merging them to build the form.

I mostly keep my vessels unglazed because I like raw, grainy textures. I feel it brings out this feeling of being close to the ground, the soil, or to other naturally found surfaces. And since there is nothing shiny or colourful, the form then is most dominant.

What inspires your shapes and silhouettes? What do you try to capture in these silhouettes?
There definitely are elements of human motion that I capture in my vessels. I find myself experimenting with volumes, like an expression for limbs or building curves that can represent the posture or stance of a person.

Some forms are reduced to just an essence, like that of the leap of a rabbit or some are exaggerated like the chaos inside the washed-out cavities of seaside cliffs. I do make sketches but rarely stick to them because mostly the clay does its own thing.

Has the thought occurred that, working with mud and clay, you are somehow tapping into the cycle of nature – of death and regeneration?
I feel I become one with the material when I am working. Sometimes I wonder if the object I am making is a manifestation of my emotional state of that day.

I like to think of how clay is one of the first materials or media through which we communicated our stories, through the pots, clay tablets and artefacts that have survived till date. I find that fact quite remarkable. I also think about what artefacts we would leave behind to tell our stories to future generations. JPEGs? It’s probably not going to be clay, maybe a whole lot of partially degraded plastic.

What role do art and design in general play in your life? Were you introduced to the fine arts by your parents?
I have no background in fine art and had no influences growing up. My father was a police officer and my mother worked as a schoolteacher. However, I have the most supportive family that tries to understand what I do, and that was enough of a reason for me to keep at it.

For the longest time, everything I learned about art was through people who were more interested in it than me. My identity as an artist was only shaped once I stopped being influenced by external factors, trends and other such market demands on my art and I really began to put in the hours to do my own thing.

What would you normally wear when you work? Does your art inform your style in any way?
I have some clothes that I had kept separate for the studio, but now everything is getting dusty and stained. Quite literally, my art impacts my style.

Is there any form of traditional Indian ceramic creation that you love? That you gain inspiration from?
I am very interested in traditional pottery techniques and plan to make the study of these a big part of my journey. To learn from craftsmen, to share and exchange ideas from each other’s practice is priceless. It transfers knowledge and opens many possibilities both ways.

In March this year, I worked in Jaipur with Ram Gopal Saini, a blue pottery artist. I learnt craft and build my own interpretations based on my experience there. In a way, my works are a contemporary expression of that craft but in no way do they attempt at being its new wave. The Indian craft sector is a very integral and extremely ingrained part of our society. Artists and designers come in and give their two cents, but to try to transform it is a mammoth task and also one that needs deep inquiry.

Has there been a defining creative moment in your life that informs all others?
Every day builds up to something.

Do you have a favourite piece that you have made?
Favourite works have always been the ones that didn’t turn out exactly according to plan. Many times, it happens merely out of some error management. For example, if the clay is too wet and I am building too fast, the piece starts to fall apart. Now, I want to save it because of the time and effort I have put in, but there is no way it will look like what I had planned.

Is this exciting or upsetting?
It is hardly ever upsetting; I know when I have messed up. I will know it before it goes into the kiln for firing. So, when it comes out cracked, I will remember what horrible mood I was in while making it or that I was in too much of a rush. That’s the thing with ceramics, it teaches you to do things slowly and be patient and I like that because I want to be like that.

What are you experimenting with at the moment?
Glazes. There are so many ways to paint — engobes, underglazes, pigments — and all of them produce different results. It’s exciting but intimidating because it’s so wide a playground.

How do you name your pieces?
I know instantly after I make a piece what to call it. The forms speak to me. Sometimes it changes after firing because firing can add a whole new personality to the work.

What are the emotions that feed your creativity?
Sometimes an anxious state of mind can drive the speed up and down when I am hand-building.

I wouldn’t say it is like meditation because that requires emptying oneself from thought. But when I am working, there’s a laborious calm; it’s a focused and sedative process. And yet, I am full of ideas and daydreams, recalling memories and making to-do lists.

How did the lockdown affect your creative process?
I started doing ceramics during lockdown, so I would say it completely affected my creative process. In many ways it brought together all these aspects of my life, like work and self-expression, that were previously separate.

At the Salone del Mobile 2022 in Milan, Jaipur Rugs unveils a collaboration with Ashiesh Shah inspired by the mysteries of the universe