Handmade Stories: This contemporary crop of ceramicists is reinvigorating the age-old craft 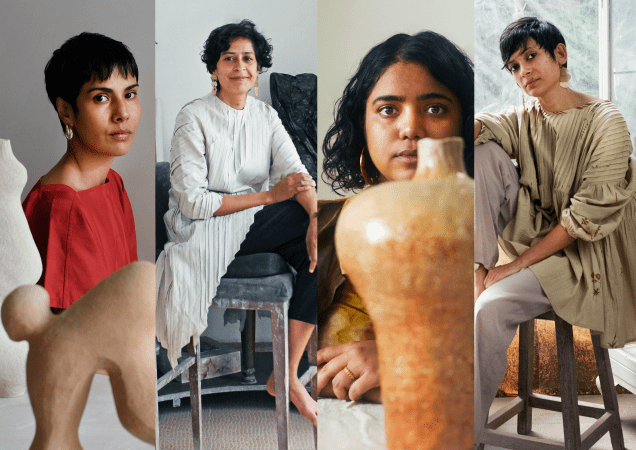 I am inescapably drawn to pottery. Is it because the thought often strikes me that these artefacts of clay are culled from the very dust that we are made from? Is it because these objects connect me to the earth itself, to the very creation of man, to death and renewal? Or because there is something so basically nourishing about vessels made originally to store food and water, symbolising the fundamentals of human life? All these, yes, as also the skills displayed by their makers. And the perfection often inherent in silhouettes so marvellously shaped. Isn’t there something almost primal in the process of working with mud – of getting your hands downright dirty and sculpting matter to your will?

Shards of pottery that survived the Indus Valley and Harappan civilisations have revealed stories of lives that we could never otherwise have guessed at. These fragments connect us to our past in a very tangible way as the skill of the potter continues to flourish with pottery being among the country’s most prevalent crafts. Almost every region in India has its own brand of traditional pottery and its community of skilled potters.

We, however, discover modern young ceramic artists who have elevated working with clay to a whole new level, inspired by motifs as varied as chicken legs and human noses to nature and the words of Rumi. Shapes flow intuitively, curves and angles finding expression with daily moods and emotions. The silhouettes of traditional pots and vases are distorted, with joyous abandon, to realise new forms. Functionality may no longer be even a consideration in some of these creations while others remain totally utilitarian at their core but unorthodox in form. These artists experiment with technique, volume, colour, glaze, texture and more to come up with their own uniqueness. The craft, in their hands, is channelled into art even as the act of creation evokes a feeling of rapture. Best said by sculptor-potter Latika Nehra in an Instagram post: “I want to live in this pleasant, lost in the moment, completely enraptured in creating – feeling more often.” Or, to quote one from sculptor Puja Rao: “I experience carving as an act of ‘unearthing’ something that’s ‘already’ there by getting rid of the unnecessary – in that moment. And in the process, with each piece, things get lighter…and so do I.”

Verve speaks to five ceramicists whose work we love….

At the Salone del Mobile 2022 in Milan, Jaipur Rugs unveils a collaboration with Ashiesh Shah inspired by the mysteries of the universe