He Wanted to Go Away to College. The Pull to Stay at Home Was Strong. 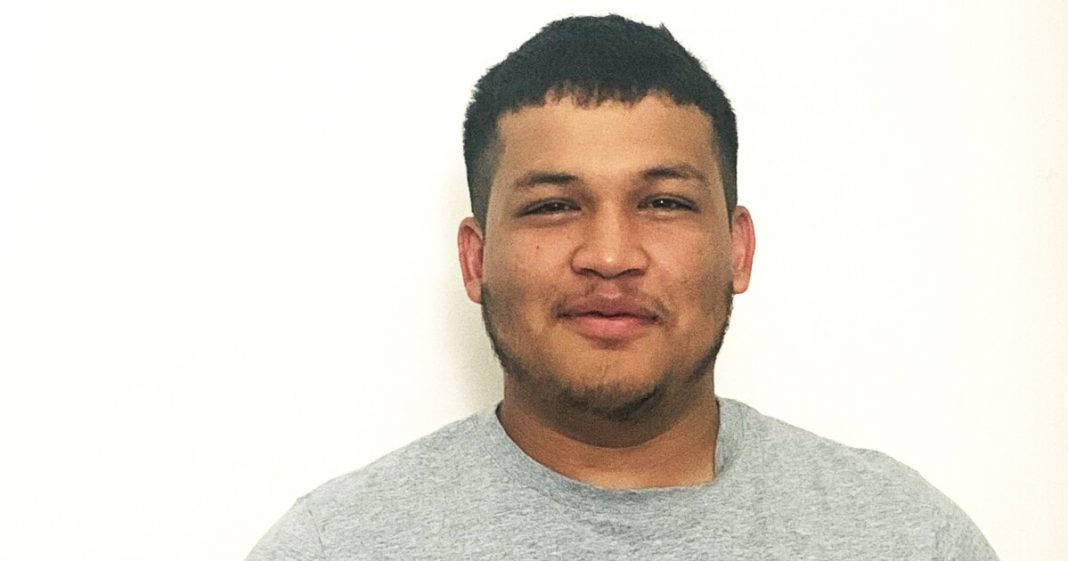 
ngel Diaz figured he would keep living at home after high school. It was an easy enough path to take, one that would please his mother.

Sure, Diaz had wondered what it would be like to go away to college and live in a dorm. The possibility felt both exciting and frightening. But for a long time, it seemed like a long shot. At the start of his senior year last fall, he believed he would end up enrolling at a community college not far from home.

Diaz, low-key and soft-spoken, grew up in suburban Maryland, just outside Washington, D.C. His parents came to the United States from El Salvador a few years before he was born. His mother cleans houses for a living. He often sees his father, who works in construction, come home feeling exhausted and sore.

Ambition flickered within Diaz, the oldest of two boys who hoped to become the first in his family to graduate from college, a hope his parents encouraged. When he started high school, though, he was unsure of how to chart a postsecondary course, unsure of the questions he should even ask. Maybe he would just go straight into the work force and not look back.

Growing up, Diaz tried hard in school but struggled with some subjects. He found writing long essays for English difficult. But math? “Way easy,” he says. Numbers lit up his mind.

We didn’t have to pay for much for me to go to a good school.

When Diaz was in elementary school, he participated in a math competition and came home crying because he hadn’t won anything. Study, his mother told him. She bought him flash cards — addition, subtraction, multiplication — and every night they went over them together before bedtime. They kept at it until he got all the answers right.

The next school year, Diaz won a handful of medals in the math competition. An award certificate bearing his name found a place of honor in the living room. He credited his mother for having pushed him to succeed.

His mother, who took him to doctors’ appointments on the bus. Who took him to playgrounds so he could have fun. Who gave up wage-hours to take care of him and his little brother. Who never left them with a babysitter because, he says, “she wanted to do it herself, to show us how she thinks things are done best.”

His mother, who made one thing clear whenever talk turned to college: “She didn’t want me to move out.”

amilismo. The term is often used to describe the importance of strong ties among immediate and extended family members in Latino culture. A loyalty to one’s family, a sense of closeness and obligation to them, can shape a college applicant’s thinking about where to apply and enroll, about what’s even possible.

Every family has its own story, of course. And let’s be clear: Not all Latino students experience the same thing when applying to college. But for some applicants those tight connections can pull them toward one option and away from others. Those connections often fold into other pressing concerns.

Like costs, a big worry for Diaz and his parents, who earned little. Montgomery College, a nearby community college, seemed at first like the most affordable option. Living at home would help him save money. “A safe choice,” he says.

It was difficult to see other choices through the fog of his future. Diaz says he didn’t get much direction from his school counselor. Then, in his senior year, he connected with CollegeTracks, a nonprofit group that helps low-income students in Maryland’s Montgomery County apply to college and secure financial aid. The organization’s advisers helped him think deeply about his interests and goals, the experience he sought. He knew he wanted to work with numbers, maybe major in finance.

At first, Diaz wasn’t sure if he could get into selective four-year colleges. In high school he had taken things week by week, just trying to stay on top of his assignments. He wasn’t a straight-A student but managed to make the honor roll each quarter. He didn’t like reading and writing but pushed through his frustrations in English classes to raise his C to a B a few times. For one assignment he wrote an essay about the time he was in the hospital and his mother had stayed by his side the whole time. Her caring, he says, had shaped him.

Last fall, as many seniors throughout the nation threw themselves into applying to college as forcefully as they could, Diaz didn’t have a lot of time to spare, working after school as a cashier at a Harris Teeter supermarket. For a while he put in a total of 22 hours a week, Monday through Friday. This made it difficult, he says, to fit in meetings with his advisers at CollegeTracks.

As Diaz learned about “sticker prices,” last-dollar scholarships, and the Free Application for Federal Student Aid, he was also memorizing price look-up codes for produce. Bananas, 4011. Grapefruit, 4281. Kale, 4627. The job was fine except for some customers who were rude. He wore comfy Crocs, but standing for hours was tough.

But how to choose? Diaz didn’t know. His mother’s wish for him to stay at home weighed on him. He, too, liked the idea of being around his family each day for a couple years while attending community college.

Still, the thought of transferring to a four-year campus down the line seemed like a hassle. Moving out, Diaz thought, would be a natural thing to do when you’re 18: “At some point, this is something that’s supposed to happen.”

After his financial-aid offers came in this spring, CollegeTracks made Diaz a handout that helped him compare his options, showing the cost of each institution before and after loans. Between the federal Pell Grant and the state of Maryland’s need-based Guaranteed Access Grant, Diaz would have most of the cost of attendance covered at each four-year campus.

Diaz had always assumed it would be much cheaper for him to stay home and attend Montgomery College, but in his case it turned out not to be true. “Once I got the news that we would get a lot of financial aid, me and my mom got pretty emotional,” he says. “We didn’t have to pay for much for me to go to a good school.”

Still, there was the question of fit. Which campus would suit him best?

or every student who who visits several campuses twice, who thinks deeply about how the many attributes of one college compares with those of another, who goes over each institution’s tangible and intangible qualities with the finest of combs, there’s another student who just … decides. They base their choice on cost. Or distance. Or one quick impression.

The mechanics of the financial-aid process left Diaz little time to reach a conclusion. The generous state grant he received provides up to $20,000 annually for students attending a two- or four-year college in Maryland (the amount varies depending on where students enroll). But the grant came through about 10 days before May 1, the deadline by which students accepted at many colleges must make their final decision.

Until late April, Diaz hadn’t visited any of the four-year institutions on his list. One reason was a lack of transportation: After an accident sidelined one of the family’s two cars, his father needed the other car to get to and from work.

When Diaz applied to colleges, he hadn’t been completely sure how far each one was from his home. He crossed Towson off the list once he learned that it was about an hour away. That left College Park and UMBC, which both struck him as solid choices. But the former, less than a half-hour drive, was closer to home.

One day a friend gave Diaz a ride to College Park. They walked around the campus and saw students studying, chatting, and laughing. The evident diversity of the campus made him feel comfortable, like he would fit in. And that was enough. He went home without talking with anyone on the campus.

A few days later, Diaz returned to College Park with his parents so they could get a look around. They were impressed. Then the family sat in the shade of an umbrella at an outdoor table and discussed his future.

They knew that the amount of his state grant — $19,000 a year for College Park — would decrease if he chose to live off campus. And if he commuted from home each day he would need to pay for gas and parking. It made more sense, they figured, for him to live in a dorm.

Though his mother still had reservations about him leaving home, Diaz says, she was convinced that College Park was the best option. He felt a surge of relief.

Diaz never visited UMBC, a much smaller campus known for its emphasis on science, technology, engineering, and mathematics. “It would’ve made my choice much harder,” he says of checking out UMBC in person. “If I really liked it, I would’ve had a hard time deciding which one to pick. I didn’t want to add that pressure.”

Besides, by the time Diaz and his parents visited College Park, May 1 was just a couple days away. There was no time left to make the trek up to UMBC.

As time goes on, you question yourself. What if I had made this choice instead of that one? But for right now I feel like I made the right choice.

Diaz says the process taught him about the importance of preparation. If he had started researching colleges earlier, he probably would’ve had more options and more time to weigh them. Then again, he thought, how many options did he really need? He got into a few colleges he considered good. It was a win.

As summer neared, Diaz reflected on his decision: “As time goes on, you question yourself. What if I had made this choice instead of that one? But for right now I feel like I made the right choice.”

For some applicants, success means having an abundance of options; for others, a handful is plenty, and just one might seem like enough.

On a Monday morning in June, Diaz sat in his bedroom amid Lego cars he had assembled and a small army of bobblehead action figures called Funko Pops — Spider-Man and Captain America, Batman and Green Goblin. In a couple months he would pack up his things and move.

As Diaz thought about life in College Park, he felt excited and nervous. He wanted to make new friends and get involved with clubs, but he hadn’t really thought about which ones yet. The next phase of his life felt close but also far off. He pictured himself in College Park, studying, hanging out, cheering for sports teams.

And Diaz pictured something else: He planned to leave the campus each Friday afternoon to spend the weekend with his family. His mother would cook dinner, maybe pupusas revueltas, stuffed with beans, cheese, and pork. For a couple nights a week, he would be home again. And for now that felt just right.