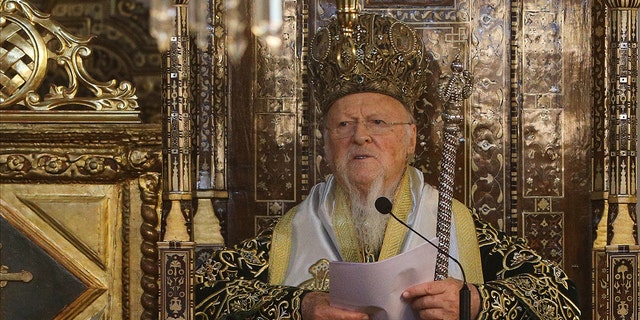 The global head of Eastern Orthodoxy offered a rare public criticism when he condemned Russian President Vladimir Putin and the Russian invasion of Ukraine, saying “the whole world is against Russia.”

During an interview with CNN TÜRK, Ecumenical Patriarch Bartholomew of Constantinople said he maintained “a very good relationship” with Ukraine President Volodymyr Zelenskyy while he described how Russia’s recent military actions have strained the country’s relationship with the rest of the world.

“Anyone who thinks right and acts right does not want this situation, this new Cold War period. As a religious institution, our Patriarchate, has always been in favor of peace and unity, and we continue to do so. We have especially strengthened our prayers these days,” he added.

Current archbishop of Constantinople and ecumenical patriarch Bartholomew I of Constantinople serves the service at the principal Eastern Orthodox St. George’s Cathedral in Istanbul, Turkey, November 30, 2020. (Photo by Sergii Kharchenko/NurPhoto via Getty Images)

The head of Russia’s Orthodox Church, Patriarch Kirill, has voiced support for Putin and even went as far as to justify Russia’s invasion of Ukraine as a war against sinful living and in response to the “extermination” of Donbas separatists.

“We have entered into a struggle that has not a physical, but a metaphysical significance,” Kirill said during a church sermon on Sunday, before the start of Lent.

He also said the Donbas citizens are suffering for their “fundamental rejection of the so-called values that are offered today by those who claim world power.”

The ongoing struggle, then, was a “test for the loyalty” of those who peddle their own ideas of freedom and “excess consumption.”

The controversial comments have split Ukrainian Orthodoxy as some are still loyal to the Russian Orthodox Church, despite Putin’s militaristic invasion.

“And the reason is obvious. The treacherous open invasion of Ukraine is a huge mistake of Russia,” wrote Rev. Mykola Danilevich, who also noted that “many of our priests have stopped commemorating the Moscow Patriarch for worship services.”

“People did not hear from the patriarch a clear assessment of this war and his call to stop this madness,” Danilevich added.

A 2018 survey found that about 67.3% of Ukraine’s population identifies as one or another strand of Orthodox Christianity, with 28.7% part of the Kyiv-based Orthodox Church of Ukraine (OCU), 23.4% simply “Orthodox,” and 12.8% Ukrainian Orthodox Church-Moscow Patriarchate.

Fox News’ Tyler O’Neil and The Associated Press contributed to this report.