Here’s what Walmart, Target, Home Depot and Lowe’s tell us about the state of the American consumer 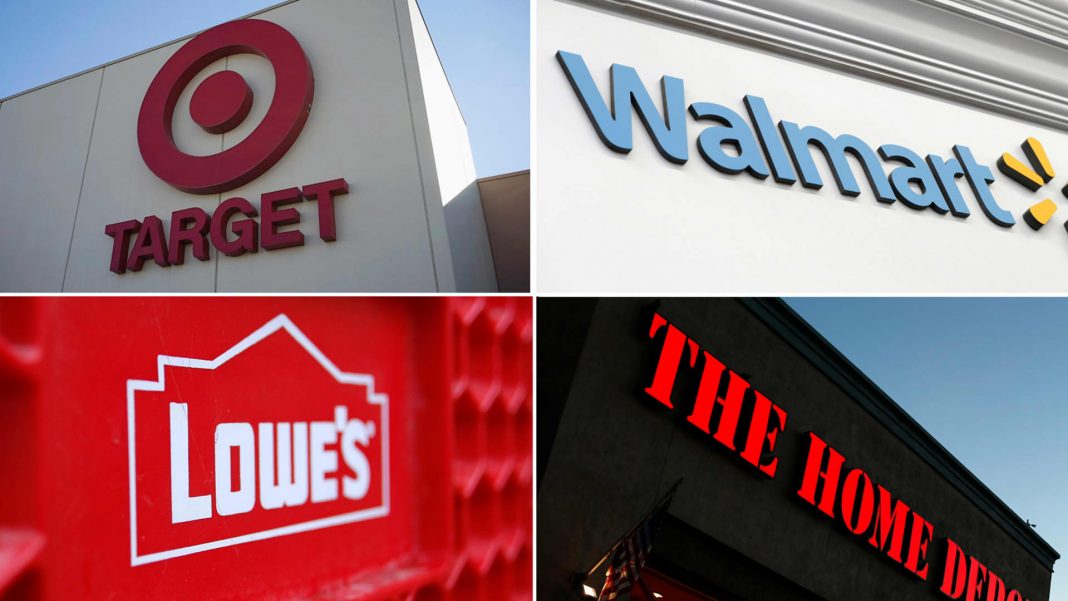 How well is the American consumer holding up against sky-high inflation? It depends on whom you ask.

Four major retailers — Walmart, Target, Home Depot and Lowe’s — reported quarterly financial results this week, and they each offered a different perspective on where and how people are spending their money.

Walmart said some of its more price-sensitive customers are beginning to trade down to private-label brands, while Home Depot emphasized the resiliency among its customer base, a sizable percentage of which are professional home builders and contractors.

The reports came after Amazon in late April flashed warning signs for the retail industry when it booked the slowest revenue growth for any quarter since the dot-com bust in 2001 and offered up a bleak forecast.

Still, expectations on Wall Street were higher this week for both Walmart and Target. Analysts and investors didn’t anticipate that the two big-box retailers would take such a massive hit to their profits in the latest period as supply chain costs weighed on sales and unwanted inventory, such as TVs and kitchen appliances, piled up. Walmart closed Tuesday down 11.4%, marking its worst day since October 1987. On Wednesday, Walmart fell another 6% in afternoon trading, while Target was also on pace to have its worst day in 35 years.

Home Depot and Lowe’s, though, have seen more strength among shoppers in recent weeks.

“Our customers are resilient. We are not seeing the sensitivity to that level of inflation that we would have initially expected,” Home Depot CEO Ted Decker said Tuesday on the company’s earnings call. (Shares of both home improvement chains were down more than 5% in Wednesday afternoon trading amid a broader market selloff.)

The mixed commentary from these retailers is in large part due to the fact that Americans are experiencing economic volatility differently, dependent upon their income levels. Companies and consumers are in an uncharted transition period following months of Covid-related lockdown measures that prompted purchases of canned goods, toilet paper and Peloton Bikes to soar. Multiple rounds of stimulus dollars fueled spending on new sneakers and electronics.

But as that money dries up, retailers must navigate their new normal. That includes inflation at 40-year highs, Russia’s war in Ukraine and a still-crippled global supply chain.

“While we’ve experienced high levels of inflation in our international markets over the years, U.S. inflation being this high and moving so quickly, both in food and general merchandise, is unusual,” Walmart Chief Executive Officer Doug McMillon said Tuesday on an earnings conference call.

The results this week could foreshadow trouble for a number of retailers, including Macy’s, Kohl’s, Nordstrom and Gap, which have yet to report results for the first quarter of 2022. These companies that rely on consumers coming inside their stores to splurge on new clothes or shoes could be particularly pressured, as Walmart hinted that shoppers were beginning to pull back on discretionary items to budget more money toward groceries.

At the same time, retailers are citing an uptick in demand for items such as luggage, dresses and makeup as more Americans plan vacations and attend weddings. But the concern is that consumers will be forced to make trade-offs, somewhere, in order to afford these things. Or they’ll seek out discounted goods at shops such as TJ Maxx.

Here’s what Walmart, Target, Home Depot and Lowe’s are telling us about the state of the American consumer.

Walmart is seeing a mixed picture, shaped by consumers’ household income and how they feel about the future. But in the most recent quarter, the nation’s largest retailer said shoppers are showing they are mindful of the budget.

Customers walked out of stores and left the retailer’s website with fewer purchased items. More of them skipped over new clothing and other general merchandise as they saw prices rise on gas and groceries. Some traded down to cheaper brands or smaller items, including half-gallons of milk and the store brand of lunch meat instead of a pricier brand-name one, Chief Financial Officer Brett Biggs told CNBC.

On the other hand, he said, some customers have sprung for new patio furniture or eagerly chased the flashy new gaming console, he said.

“If you look at the demographics of the U.S. and lay our customer map on top of it, we’d be really close to the same thing,” Biggs said. “And so you’ve got some people who are going to feel more pressure than others and I think that’s what we’re seeing.”

Target said it is seeing a resilient consumer who have new priorities as the pandemic becomes more of an afterthought.

That change showed up with purchases in the fiscal first quarter, he said. Customers bought decor and gifts for Easter and Mother’s Day celebrations. They threw, and attended, larger children’s birthday parties – leading to a jump in toy sales. They also bought fewer items like bicycles and small kitchen appliances as they booked flights and planned trips.

Cornell pointed to the high spending levels that Target went up against in the year-ago first quarter, as Americans got money from stimulus checks and had fewer places to spend it.

Comparable sales still grew, despite that challenging comparison, he noted.  Plus, traffic at Target’s store and website traffic rose nearly 4% year over year. Sales growth numbers, however, would include the effects of inflation which is making everything from freight costs to groceries pricier.

Target last quarter also had a higher level of markdowns, a staple of the retail industry that more or less disappeared during the pandemic as shoppers had a big appetite to buy and retailers had less merchandise to put on shelves.

The home improvement retailer told investors on Tuesday that it wasn’t seeing any differences in consumer behavior yet.

Home Depot’s average ticket climbed 11.4% in the quarter, fueled largely by inflation. But executives also said that consumers are trading up, not trading down. For example, consumers are switching from gas-powered lawn mowers to more expensive battery-powered options, according to Home Depot’s Vice President of Merchandising Jeff Kinnaird.

This behavior likely is due to the fact that the overwhelming majority of Home Depot customers are homeowners, who have seen their home equity values soar in the last two years. CFO Richard McPhail said on the call that more than 90% of its do-it-yourself customers own their homes, while basically all of its sales to contractors are on behalf of a homeowner.

McPhail also said that roughly 93% of its customers with mortgages have fixed rates. As interest rates and housing prices rise, consumers who consider moving are opting instead to stay in their current homes and remodel them instead.

“It’s one of the reasons why I think home improvement is a unique retail sector and can have this macro environment where there are a lot of questions about the health of the consumer,” he told analysts.

Consumers working on DIY projects account for about three quarters of Lowe’s sales, which is a higher proportion than rival Home Depot. So far, the company isn’t seeing any material trade down from those consumers yet.

However, consumers are starting to feel the pinch from rising energy prices. Ellison told CNBC that Lowe’s customers are trading up to battery-powered landscaping tools and lawnmowers and more fuel-efficient laundry machines.

“Do I think it has something to do with fuel prices? The answer is absolutely,” he said.

Lowe’s did fall short of Wall Street’s expectations for its quarterly sales, but executives chalked up the retailer’s disappointing performance to weather.