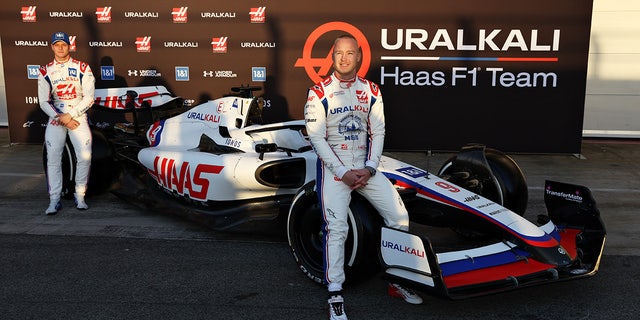 Haas F1 owner Gene Haas said his team fired its Russian driver Nikita Mazepin because of the broad issues his inclusion were causing for the team, despite Russians and Belarusians being allowed to compete in international Motorsports under the FIA flag, according to a ruling by the governing body last week.

Russian Haas F1 driver Nikita Mazepin (R) was set to drive a car sponsored by his father’s company Uralkali that wore the colors of the Russian flag this season.
(Mark Thompson/Getty Images)

Mazepin’s contract was terminated last week along with that of the team’s title sponsor, Uralkali, a Russia-based fertilizer company owned by his father, Dmitry.

Haas F1 is primarily funded by Haas Automation, a CNC machine tool company owned by Haas and its cars will revert to the company’s white, red and black color scheme for the Formula One test sessions in Bahrain this week, dropping the white, blue and red colors of the Russian flag they wore last year and at a test in Barcelona in February.

The team’s reserve driver Pietro Fittipaldi will drive Mazepin’s car at the Bahrain test, but the team hasn’t yet decided who will fill the seat during the season, which kicks off at the same track next week. Mick Schumacher of Germany drives Haas F1’s second car.

“We’re in the process of looking at several candidates, we’ll see who is available and what we have to deal with, Haas said.

Haas hasn’t yet announced a replacement for Uralkali, but considers the team an marketing expense for Haas Automation and is prepared to run it at a large deficit.

“We’re good. We’re fine. We’d like more money, of course, but we’re fine,” he said. “This just gives us a bigger negative number.”

The Associated Press contributed to this report