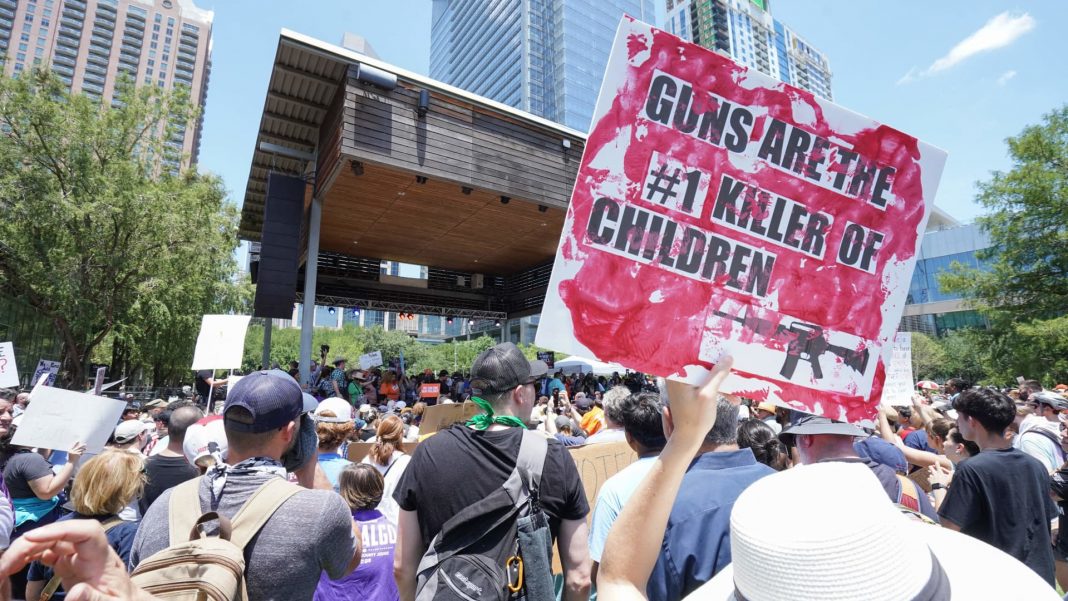 Activists listen as Senate Democrats speak during a news conference demanding action on gun control legislation after a gunman killed 19 children and two teachers in a Texas elementary school this week, on Capitol Hill on Thursday, May 26, 2022 in Washington, DC.

House Democrats will try to advance a raft of gun-control bills on Thursday in the wake of two high-profile mass shootings that rocked the nation earlier this month.

House Judiciary Committee Chairman Jerry Nadler, D-N.Y., has called lawmakers back from a break to mark up gun legislation that combines eight separate bills. He aims to bring a suite of new gun-safety laws to the House floor “as soon as possible,” a spokesman said, in light of the two gruesome mass shootings.

The more-recent and deadlier attack occurred on Tuesday, when an 18-year-old gunman shot 19 children and two teachers to death at an elementary school in Uvalde, Texas. That massacre came just 10 days after another teenager killed 10 shoppers at a supermarket in a racist rampage in a predominantly Black neighborhood in Buffalo, New York.

The Democratic-led package will likely fail in the face of Republican opposition in the Senate. However, Democrats have acknowledged a hope — however slim — that bipartisan talks in the Senate can lead to lawmakers passing a more limited bill with support from both parties.

Nadler’s spokesman confirmed the list of bills the House Judiciary Committee will consider under the broader “Protecting Our Kids Act.” Those bills include:

The combined bill would introduce a range of regulations on the sale or use of firearms and associated equipment.

The Raise the Age Act would increase the purchasing age for semiautomatic rifles from 18 to 21 years, while the Keep Americans Safe Act would outlaw the import, sale, manufacture, transfer or possession of a large-capacity magazine.

Ethan’s Law would create new requirements for storing guns at homes, especially those with children, and provide tax credits for secure storage devices.

While it’s unclear when the omnibus will arrive on the House floor, Nadler’s move to reconvene the committee early signals that House leadership wants to vote on the legislation soon after lawmakers return from break next week, while Democrats still have momentum behind them.

Also unclear is whether House Speaker Nancy Pelosi, D-Calif., and her deputy, Majority Leader Steny Hoyer, D-Md., want to vote on a single massive bill or break it into its several components and attempt to pass parts piecemeal.

Republican opposition to the package is more certain.

Senate Republicans have for years blocked progress on any gun-safety legislation. They opposed efforts to tighten gun regulations both when they held the majority and, as now, when they can threaten an indefinite filibuster if Democrats can’t come up with the 60 votes required to circumvent the stalling tactic.

Sen. Ted Cruz, a Republican representing Texas, took to Twitter four days after the massacre in his state to say that “taking guns away from responsible, law-abiding Americans will not make our nation more secure.”

“It’s much easier to scream about guns than it is to demand answer about where our culture is failing,” Cruz added in a separate social media post on Saturday.

Anti-gun demonstrators protest outside the National Rifle Association Annual Meeting at the George R. Brown Convention Center, on May 27, 2022, in Houston, Texas.

Disapproval from Cruz and other Senate Republicans will likely doom any legislation Nadler and other House Democrats manage to pass. But that isn’t likely to deter Pelosi, who on Wednesday acknowledged the long odds any gun-control legislation faces in the Senate.

“We pray that the bipartisan conversations unfolding in the Senate right now will reach agreement on legislation that can save lives and can be acted upon soon,” she wrote in a letter to fellow Democrats.

“On multiple occasions, the Democratic House has passed strong, commonsense gun violence prevention legislation,” she added. “As we have promised again and again to the courageous survivors of gun violence, we will never stop until the job is done.”

For his part, Senate Majority Leader Chuck Schumer, D-N.Y., has said he wants the nation to watch as Senate Republicans vote down gun control legislation. He said he is open to holding votes on bills even if they are virtually guaranteed to fail.