How a Washington State U. Doctoral Student Became a Suspect in the U. of Idaho Murders 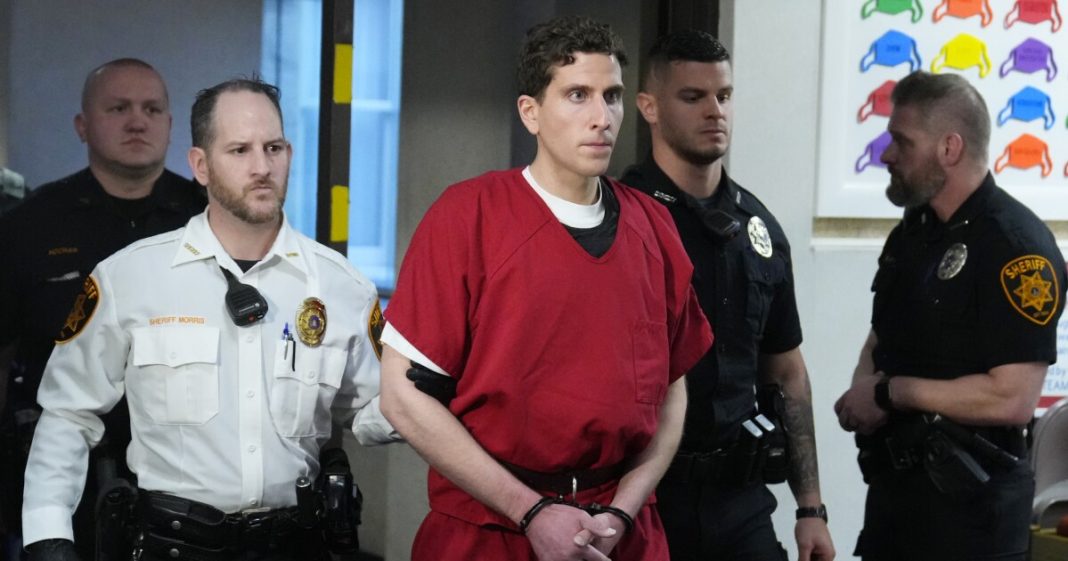 
Surveillance-video footage from Washington State University was critical in identifying a Ph.D. student as a suspect in the murders of four University of Idaho students, a court document revealed on Thursday.

Bryan C. Kohberger was studying criminology at WSU, located less than 10 miles from the Moscow, Idaho, home where the Idaho students were killed on November 13. The 28-year-old was arrested on December 30 and is facing four first-degree murder charges for the deaths of Ethan Chapin, 20; Kaylee Goncalves, 21; Xana Kernodle, 20; and Madison Mogen, 21.

A probable-cause affidavit made public on Thursday details how investigators used security-camera footage from the suspect’s university and elsewhere, along with cellphone data, DNA evidence, and eyewitness accounts, to tie Kohberger to the murders.

The affidavit, written by Cpl. Brett Payne of the Moscow Police Department , reveals that one of the two surviving housemates of the victims saw a “figure clad in black clothing and a mask that covered the person’s mouth and nose walking towards her” the morning of the murder.

The housemate, identified in the affidavit as D.M., told the police that she was awakened at around 4 a.m. by what sounded like Goncalves playing with her dog, and that a short time later she heard Goncalves saying, “There’s someone here.” D.M. opened her bedroom door, the affidavit said, but didn’t see anyone. After that, she heard crying coming from Kernodle’s room and a male voice saying, “It’s OK, I’m going to help you.” D.M. opened her door again, and that’s when she saw the black-clad figure, who then walked toward the back sliding-glass door and left. D.M. said she froze in shock and then locked herself in her room, according to the affidavit.

Investigators obtained cellular data that suggest the suspect had been near the Moscow residence at least a dozen times in the months leading up to the murders.

The police were not called to the house until almost noon that day. The affidavit did not say why D.M. did not contact law enforcement earlier.

The person D.M. saw was a man at least 5-feet-10-inches tall, “not very muscular, but athletically built with bushy eyebrows” — a description that would later match the suspect investigators tracked down through video footage from businesses and residences around the Moscow neighborhood and from Washington State University.

The footage showed a white Hyundai Elantra driving by the victims’ residence three times in the early morning hours of November 13. The vehicle returned a fourth time at about 4:04 a.m., and was seen leaving the neighborhood at 4:20 a.m. “at a high rate of speed.”

After the Moscow police asked local law-enforcement agencies to be on the lookout for the car, Daniel Tiengo, a Washington State University police officer, searched records for white Elantras registered with the institution and found one in Kohberger’s name. Investigators used WSU security footage to track the suspect’s movements between the residence in Moscow, and WSU’s campus in Pullman, Wash.

Investigators also obtained cellular data that suggest Kohberger had been near the Moscow residence at least a dozen times in the months leading up to the murders, and that his phone was turned off or on airplane mode the morning of the murders. The device’s movements at other times were consistent with the movements of the white Hyundai Elantra, the affidavit said.

In December, as the University of Idaho community mourned the loss of Chapin, Goncalves, Kernodle, and Mogen, Kohberger drove with his father from Washington to Pennsylvania, where his family lives. They were stopped by local police officers in Indiana for tailgating.

Kohberger agreed to be extradited to Idaho on Wednesday. He appeared in an Idaho court for the first time on Thursday, minutes after the affidavit was released.

The affidavit reveals that Kohberger has undergraduate degrees in psychology and cloud-based forensics, and that he had applied for an internship with the Pullman Police Department in the fall of 2022. “Kohberger wrote in his essay he had interest in assisting rural law-enforcement agencies with how to better collect and analyze technological data in public safety operations,” Corporal Payne wrote.

The affidavit also notes that Kohberger had posted a research survey on Reddit seeking to “understand how emotions and psychological traits influence decision making when committing a crime.” He wrote that the study was approved by the internal review board at DeSales University, where he earned bachelor’s and graduate degrees.

In an email to the Washington State University community on Tuesday, the chancellor, Elizabeth S. Chilton, referred to Kohberger as a “former” graduate student and encouraged the community to cooperate with law enforcement in the investigation.

Chilton wrote that a new year and a new semester bring the opportunity for growth, peace, and healing. “I am hopeful that the coming days and weeks will provide all of us with additional answers and information about the nature of this incident,” she wrote. “I want to remind you all to support each other, be kind, and take time for yourself.”

Officials at the University of Idaho did not respond to a request for comment on Thursday.