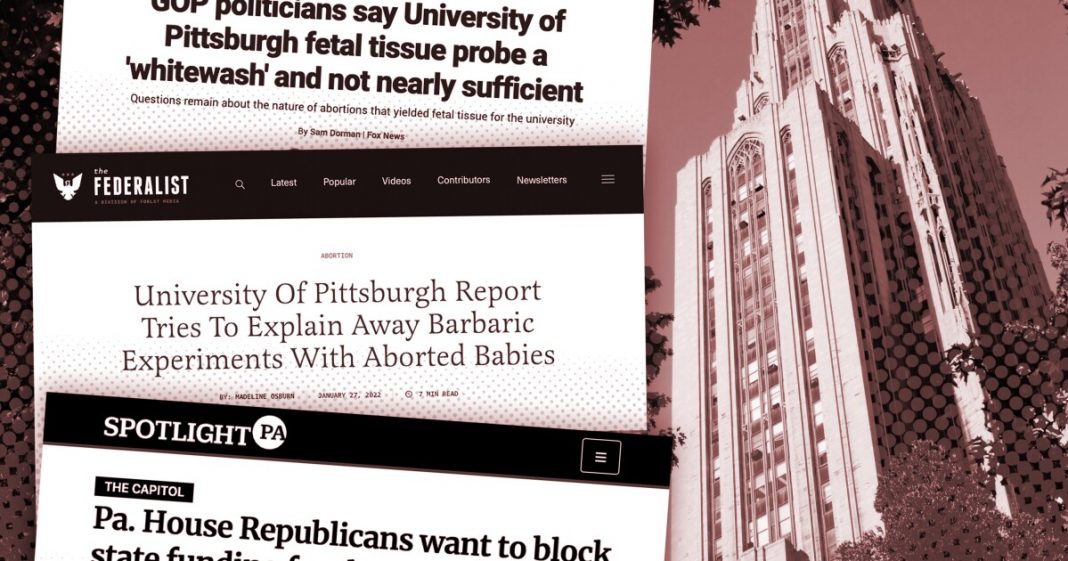 
A yearslong dispute between anti-abortion activists and University of Pittsburgh researchers over fetal-tissue research made it to the highest levels of state government this year and briefly blockaded Pennsylvania’s $42-billion budget.

The budget impasse was partly the result of an amendment passed by GOP members of the Pennsylvania House of Representatives last month that would have required the University of Pittsburgh to cease any research involving fetal tissue. If the university didn’t meet that requirement, it would have forfeited about $150 million in tuition aid for in-state students.

Pitt declined to make anyone available for an interview, but the university notes on its website that it complies with rigorous federal and state laws in this area, and that its scientists have used fetal tissue to study treatments “for HIV, AIDS, and cancer. For example, by learning how the placenta protects the fetus against viral infections, researchers are able to keep more mothers and their babies healthy and safe.”

The amendment to withhold tuition aid was defeated on Wednesday. Though nearly a week into the state’s new fiscal year, Pennsylvania is still operating without a budget. Gov. Tom Wolf, a Democrat, would certainly have vetoed the measure had it passed, said J. Wesley Leckrone, an associate dean of social science and an expert in Pennsylvania politics at Widener University.

“With Roe just being overturned, there was no way the governor would cave on this,” he said.

Most Republicans were bound to reject the effort as well, Leckrone said, in an election year when parents are concerned about the price of tuition.

“If there is something social conservatives can win out of this,” he said, “I don’t know what that is.”

Across the country, the use of fetal tissue for scientific research is relatively rare. A study from the Charlotte Lozier Institute, a nonprofit that opposes abortion, found 144 research projects using fetal tissue in 2019 that were paid for with $109 million in grants from the National Institutes of Health. The overall NIH budget for research annually is nearly $42 billion, according to the Lozier study.

Since 2001, Pitt has conducted 31 individual research studies using human fetal tissue, according to figures from the university.

But the move by several state legislators to withhold a highly ranked research institution’s tuition aid over fetal-tissue research is getting renewed political attention in the wake of the U.S. Supreme Court’s ruling that removes the constitutional right to abortion. Opponents of abortion have long opposed the use of fetal tissue collected from elective abortions, arguing that it encourages medical providers to perform abortions or that the procedures are inhumane.

State lawmakers considered a similar measure in 2019, but the budget battle in Pennsylvania didn’t start with state legislators’ trying to force a conservative agenda onto the universities.

It started with David Daleiden, an anti-abortion activist and founder of a California-based group called the Center for Medical Progress.

Daleiden and members of his group, who label themselves citizen journalists, gained notoriety in 2015 for posing as employees of a fake biomedical company and producing videos purporting to show officials from Planned Parenthood seeking profits from the sale of tissue from aborted fetuses.

The videos were widely panned as deceptive, and Planned Parenthood filed a civil lawsuit against Daleiden for fraud, unlawful recording, and civil conspiracy. It was eventually awarded more than $2 million in a jury trial, according to Reuters. Separately, a federal judge ordered the Center for Medical Progress to pay another $13 million, the news service reported. Daleiden has appealed both decisions, according to news accounts. In 2017, then Attorney General Xavier Becerra of California charged Daleiden and an associate with 15 felony counts for illegally filming health-care workers in several locations.

Despite questions about Daleiden’s methods and credibility, he has remained active and influential in opposing fetal-tissue research. He has also found a new target: the University of Pittsburgh.

In 2019, the Washington Examiner published an op-ed by Daleiden that accused researchers at Pitt of conducting “infanticide” by collecting tissue from live infants who might have survived outside the womb.

In May 2021, Daleiden testified at a hearing of the Health Committee of Pennsylvania’s House of Representatives, repeating those allegations and decrying the use of fetal tissue grafted onto laboratory rats.

Daleiden could not be reached for comment. The center’s website appears to be unavailable, and an email to the group from its Facebook page was not answered.

In response to Daleiden’s accusations, Pitt conducted an external review, which concluded that the “university’s activities related to the procurement, disbursement, and use of human fetal tissue in research are fully compliant with applicable laws.”

Arthur L. Caplan, a professor of bioethics at New York University, said Daleiden’s accusations amplify the emotional response to abortion with inflated claims about how the tissue is collected and used.

For example, no one is collecting tissue from a fetus that is still alive, he said. No one is using the idea of medical research to promote abortions, Caplan said, and from his experience, no mother considering an abortion is choosing that in order to aid research. Eliminating the possibility of collecting fetal tissue would very likely have no effect on the number of abortions, he said.

How researchers collect and use the tissue from aborted fetuses is already highly regulated, said Caplan, who has been writing about the policies and ethics guiding fetal-tissue research since 1990. The principles guiding those practices are very similar to those used for organ donation, he said, including first getting consent from the mother before discussing the possibility of donating tissue. Medical providers also cannot modify the abortion procedure, Caplan said.

“I do think compliance with strong limits on how fetal tissue is obtained is important,” said Caplan. But groups like Daleiden’s, he said, are just “throwing charges up against the wall to see if something sticks.”