How the Pandemic Hammered a Key U.S. Export: Education 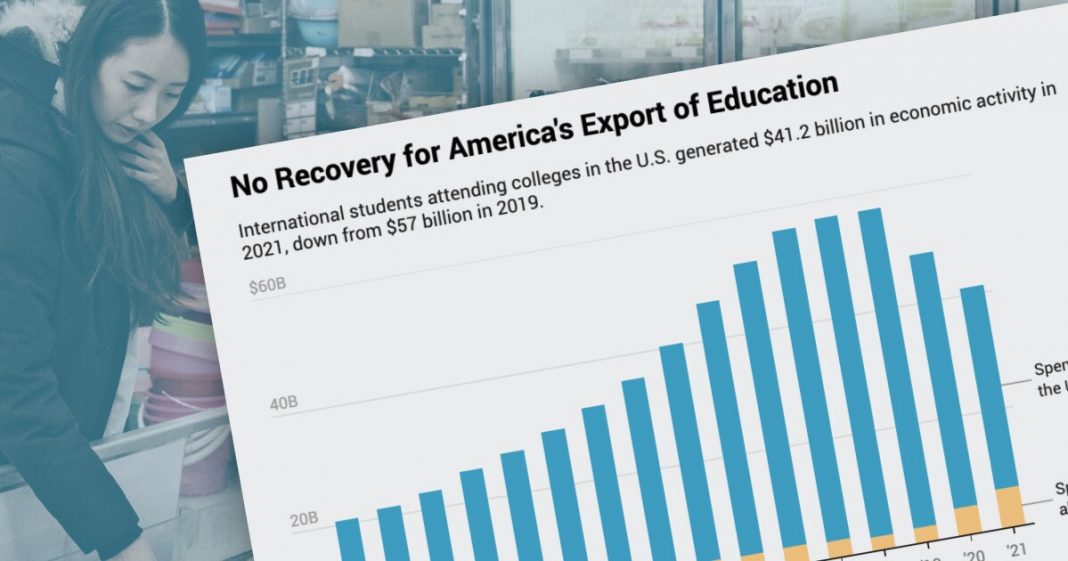 
Despite a vaccine-driven recovery in other parts of the U.S. economy last year, economic activity generated by educational services to international students continued to languish in 2021, according to estimates released last week by the Bureau of Economic Analysis at the U.S. Department of Commerce.

Considered an export by the BEA, these education-related transactions produced $41.2 billion in inflation-adjusted economic activity for the United States in 2021 — a significant decline from the $48.3 billion spawned during 2020 (exports of education services for the first two quarters of that year remained at levels commensurate with past quarters before falling substantially).

Even more startling: Between 2019 and 2021, the economic activity spurred by the export of America’s education services fell by almost 28 percent — a decline of nearly $16 billion (seasonally adjusted).

From 2006 (when the BEA began to more fully quantify the international trade of education-related services) until the pandemic, this particular facet of U.S. trade grew 13.7 percent, on average, each year.

Preliminary estimates for 2022 suggest, however, that any pre-pandemic return to dependable economic growth still remains beyond the horizon. BEA estimated the country’s export of education services to international students studying at U.S. campuses generated just $9.1 billion in economic activity in the first quarter of 2022, well below the $13.3 billion produced between January and March of 2020.

BEA calculates the export of education-related services using two measures. The first, which represents the vast majority of such economic activity, is derived from travel to the U.S. for education-related purposes — that is, foreign nationals entering the U.S. to study at American institutions of higher education. Of the $41.2 billion of economic activity generated in 2021, $34 billion could be attributed to this measure. These estimates account not just for the tuition and fees paid by international students to American educational institutions, but also any living expenses arising from their time in the country.

The other measure is the export of education-related services outside the United States to international students studying in other countries. This form of export became more prevalent in 2020 and 2021 as some international students who would have studied on a U.S. campus during that time transitioned to a remote-learning setup in their home countries. In 2019, this form of education-related export generated only $2.2 billion in economic activity — a level that was consistent with the BEA’s annual appraisals prepared since 2010. Since the pandemic’s start, the economic activity attributed to this particular form of education-related export has grown — first to about $4.2 billion in 2020, and then to nearly $6.1 billion in 2021. Still, such growth could barely blunt the much larger economic losses associated with fewer students learning on campus following Covid-19’s outbreak.

BEA’s estimates of education-related exports seek to capture the economic activity generated by U.S. education services to international learners of every age, from the K-12 level to college and beyond. Of the almost one million students studying in the U.S. on a F-1 student visa last May, nearly 90 percent were enrolled at institutions of postsecondary education.