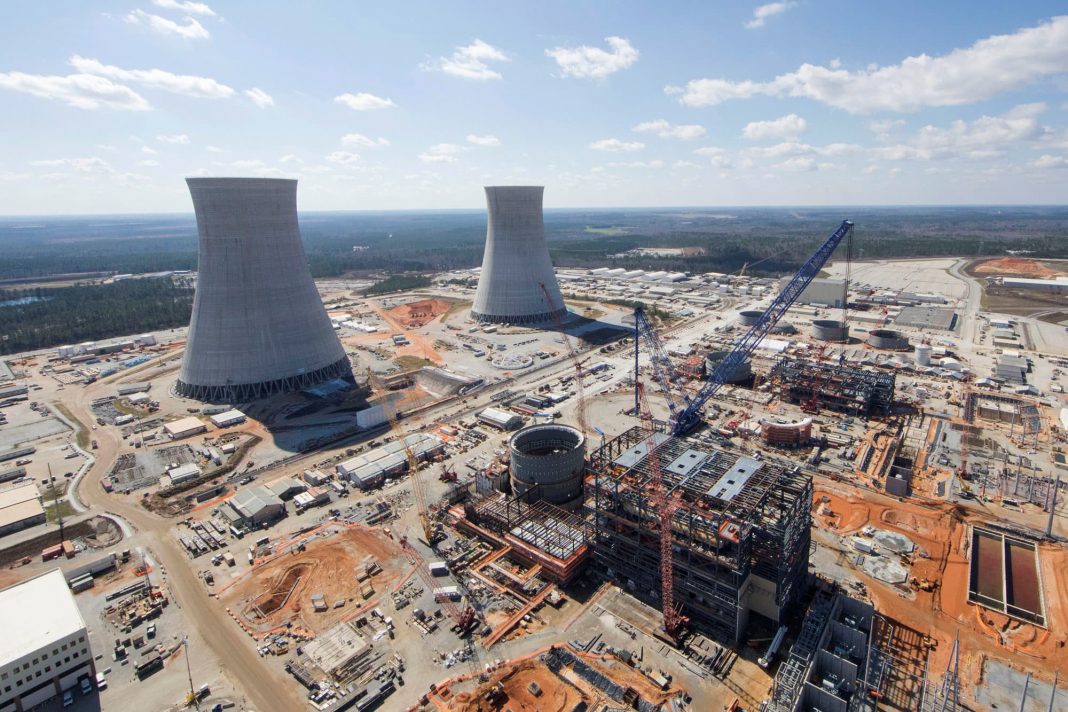 The Vogtle Unit 3 and 4 site, being constructed by primary contractor Westinghouse, a business unit of Toshiba, near Waynesboro, Georgia, is seen in an aerial photo taken February 2017.

Climate change and global security are pushing against each other in shaping the future. That’s particularly apparent in this week’s events surrounding nuclear power.

Nuclear power plants generate energy with no carbon dioxide emissions, providing an alternative to the fossil fuels that are warming the atmosphere.

“Coal and other fossil fuels are choking humanity,” U.N. Secretary-General António Guterres said on Monday after the U.N.’s Intergovernmental Panel on Climate Change released its most recent report. “The present global energy mix is broken.”

“We are issuing a warning, no country has ever shot at nuclear blocks except for Russia,” Ukraine’s President Volodymyr Zelenskyy said in a video statement, according to a translation. “For the first time ever in our history, in the history of humankind, the terrorist country has reverted to nuclear terror.”

Later on Friday, the International Atomic Energy Agency (IAEA) reported that the nuclear power plant continued to be operated and there had been no release of radioactive material. Still, the security event sent shockwaves of fear throughout the globe.

“There is going to be a teeter totter about this,” said Kenneth Luongo, the founder of the nonprofit Partnership for Global Security, which works on security and energy policy.

Seeing Ukraine’s nuclear reactors come under attack is new, and especially alarming to “much of the population that equates nuclear with weapons and with danger, and with radioactivity and health concerns.”

At the same time, nations are coming to realize they can’t meet their climate goals with renewables, like wind and solar, alone. Luongo says there was a “sea change” in sentiment about nuclear at the COP 26 climate conference last year.

China and Russia have been the most dominant political powers in nuclear power.

There are about 440 nuclear power reactors operating in more than 30 countries that supply about 10% of the world’s electricity, according to the World Nuclear Association. Currently, 55 new reactors are being constructed in 19 countries, and 19 of those are in China. The U.S. only has two underway.

“Certainly, China has the most active program of new nuclear construction,” said John Kotek of the Nuclear Energy Institute.

China has “the fastest-growing commercial nuclear energy or civil nuclear energy sector in the world. They are building at a pace that is roughly equivalent to what you signed in the U.S. in the 70s, or France in the 70s and 80s,” Kotek said.

Some of China’s focus on building new nuclear energy reactors is a response to a rapid growth in demand for energy from a fast-growing population entering the middle class.

Russian has what Kotek calls “a fairly steady program” of new nuclear buildout. Currently, three new nuclear reactors are being built in Russia.

But Russia is also the world’s top nuclear technology exporter.

A common Russian reactor design, called a VVER design, which stands for vodo-vodyanoi enyergeticheskiy reaktor in Russian, or water-water power reactor in English, is currently being built in many other countries besides Russia, including Bangladesh, Belarus, India, Iran, Slovakia and Turkey.

As Russia and China have risen to prominence, the United States has lost “the muscle memory” to build conventional nuclear reactors, Luongo said. Nuclear power got a poor reputation in the United States after the nuclear accident at Three Mile Island in 1979 in Pennsylvania, and more globally after the accidents at Chornobyl in the Ukrainian Soviet Union in 1986 and Fukushima in Japan in 2011.

But the tide is starting to turn.

The Biden administration’s solution was included in the Bipartisan Infrastructure Law, which was signed into law November, and was effectively a big subsidy. The law includes a $6 billion program intended to preserve the existing U.S. fleet of nuclear power reactors.

“While certainly not every bill is going to pass, it is indicative of a real upsurge in interest in in nuclear,” Kotek said.

Most of the resurgence in interest in nuclear energy is driven by concerns about climate change and often appears the strongest in states where coal economies are closing down.

Kotek sees this “coal-to-nuclear transition” where there is “concern in communities and states that are looking at the prospect of coal plant closure, and want to make the best use of the highly trained workforce and the asset that exists at that retiring coal plant,” he said.

As an example, in February, West Virginia overturned its moratorium on nuclear power plant construction, which had been in place since 1996.

At the same time, the Russia-Ukraine war gives the United States leverage to pry open more of a footprint in the global market. While the war is tragic, “it’s going to result in more opportunity for U.S. nuclear firms as Russia really disqualifies itself,” Kotek said.

Russia’s dangerous attack at Zaporizhzhia nuclear power plant in Ukraine and China’s decision to not vote in favor of the IAEA’s resolution to prevent the kind of attack “will blowback on both countries’ nuclear export reputation,” Luongo told CNBC.

“The question is whether the U.S. and other democratic nations rapidly move to make these points and take advantage of the opportunity.”

The US is focusing on new nuclear

Nuclear plants are expensive to build and have, in many places, become more expensive than other baseload energy alternatives like natural gas.

However, the U.S. is pushing hard into what could become the next generation of nuclear.

“The United States has made a decision that they don’t want to allow Russia and China to dominate that next phase of the nuclear market. And so the U.S. is pouring billions of dollars — shockingly — billions of dollars into the development of what are called small modular reactors,” Luongo said. Specifically, the government is using the Idaho National Lab as a testing ground for these reactors.

These smaller, advanced reactors are not necessarily new — some variation of the technology has been around since the 1950s — but they’re having a renaissance now, according to Luongo.

They can be built with more standard parts, as opposed to bespoke construction, which allows for faster and cheaper construction.

“We haven’t really begun to scratch the surface of what that means from a nuclear security and nuclear non-proliferation perspective,” Luongo said.