How to buy stocks on the brink of a bear market 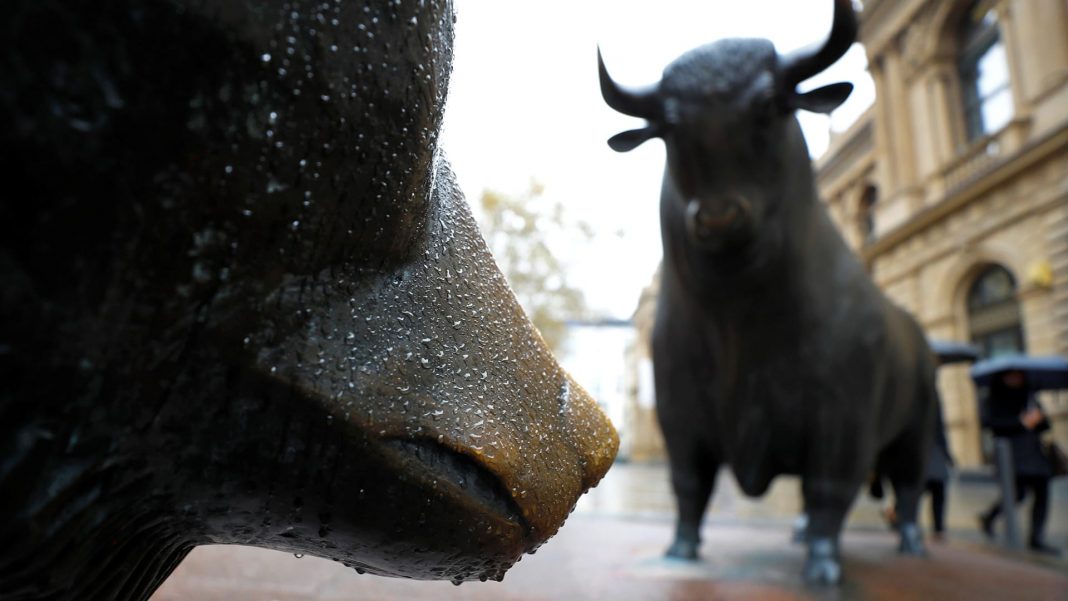 It seemed like everyone was in a buying mood on Friday, except Elon Musk. The Dow Jones Industrial Average broke a six-day losing streak, the Nasdaq Composite turned in its second positive session in a row, and the S&P 500 was up over 2%, a small step back from the brink of a bear market, ending the week 16.50% off its 52-week high. The reprieve for equities could continue, but any single-day or short-term stock gains in this market are tenuous. The Dow was down for its seventh-consecutive week for the first time since 2001.

“We saw the exact same thing in 2000 and 2001,” says Nicholas Colas, co-founder of DataTrek Research. “You knew asset prices were going down, but trading action always gave you just enough hope. … I’ve had so many flashbacks to 2000 in the past three months. … If you haven’t seen it before, it’s very hard to go through, and you don’t forget.”

For many investors who flooded into stocks since the pandemic as the bull market again seemed to have only one direction, this may be their first time dancing with the bear for an extended period. For Colas, who earlier in his career worked at the former hedge fund of Steve Cohen, SAC Capital, there are a few lessons he learned from those years which “saved a lot of heartache.”

People with umbrellas pass by bull and bear outside Frankfurt’s stock exchange during heavy rain in Frankfurt, Germany.

To start, the standing philosophy at the trading firm was to never short a new high and never buy a new low. As investors who have only ever experienced a bull market are now learning, momentum is a powerful force in both directions. This doesn’t mean investors should take any particular stocks off their radar, but stabilization in stocks isn’t going to be measured in a day or two of trading. Investors should be monitoring stocks for signs of stabilization over one to three months. An exception: a stock that rallies on bad news may be one in which the market is signaling that all the bad news is already priced in.

Here are a few more of the principles he has at the top of his stock-buying list right now and how they relate to the current market environment.

The importance of the VIX at 36

Volatility is the defining feature of the stock market right now, and the clearest signal that investors can look to as far as the selling being exhausted is the VIX volatility index. A VIX at 36 is two standards deviations away from its mean since 1990. “That’s a meaningful difference,” Colas said. “When the VIX gets to 36 we are well and truly oversold, we’ve had the hardcore panic mode,” he said. But the VIX hasn’t reached that level yet during the most recent bout of selling.

In fact, the stock market has only experienced one 36-plus VIX close this year. That was on March 7, and that was a viable entry point for traders because stocks ended up rallying by 11% — before the situation again deteriorated. “Even if you bought that close, you needed to be nimble,” Colas said. The VIX is saying that the washout in stocks isn’t over yet. “We’re dancing in between the rain drops of the storm,” he said.

Short-term bounces are often more a reflection of short squeezes than an all-clear signal. “Short squeezes in bear markets are vicious, and it’s easier trading than being short,” he said.

Look at some of the recent action in the pandemic “meme stocks” such as GameStop and AMC, as well as pandemic consumer winners such as Carvana, and Colas says that buying those rallies “is a tough way to make a living, a tough way to trade,” but back in 2002, traders did look to the heavily-shorted names, the stocks most sold into earnings.

Whether Apple, Tesla or any other, stocks won’t love you back

For investors who made a fortune in the recent bull market riding Apple or Tesla higher, it is a time to be “incredibly selective,” Colas says, and even with the stocks you’ve come to love the most, remember that they don’t love you back.

This is another way of reminding investors of the most important rule for investing amid volatility: take the emotion out of it. “Trade the market you have, not the one you want,” he said.

Many investors learned that lesson the hard way through Apple, which was down more than 6% in the past week alone. Year-to-date, Apple had dipped into its own bear market before Friday’s rebound.

“Apple had one job to do in this market, and that was not implode,” Colas said.

Everyone from mom-and-pop investors to Warren Buffett saw Apple as “the one great place to be” and watching it break down as quickly as it did shows that the stock market’s closest equivalent to a safe haven trade is over. “We’ve gone from mild risk-off to extreme risk-off and it doesn’t matter if Apple is a great company,” Colas said. “Liquidity is not great and there is a flight to safety across any asset class you can name … the financial assets people are looking for are the safest things out there and Apple is still a great company, but it’s a stock.”

And with valuations in the tech sector as high as they have been, it’s not a slam dunk to dive in.

“You can buy it at $140 [$147 after Friday] and it still has a $2.3 trillion market cap. It’s still worth more than the entire energy sector. That’s hard,” Colas said. “Tech still has some pretty crazy valuations.”

S&P 500 sectors in a better position to rally

On a sector basis, Colas is looking more to energy, because “it’s still working,” he says, and as far as growth trades, health care as the best “safety trade” even if that comes with a caveat. Based on its relative valuation and weight in the S&P 500, “It’s a good place to be if we get a rally and to not lose as much,” he said.

History says that during periods like this, health-care stocks will get larger bids because growth investors bailing out of tech need to cycle into another sector and over the years the options they have available to turn to have narrowed. For example, not too long ago there were “growthy” retail names that investors would turn to amid volatility, but the rise of online retail killed that trade.

Colas stressed that there isn’t any evidence yet that growth investors are cycling into anything. “We’re not seeing health care yet, but as growth investors sticks their heads up again, there are not many other sectors,” he said.

Even as Apple capitulated to the selling, Colas said there is always a case to make for blue-chip stocks in a bear market. Autos, which Colas covered on Wall Street for decade, are one example of how to think about blue-chips for long-term investors.

The first lesson from Ford in this market, though, may be its dumping of Rivian shares the first chance it got.

“Ford does one thing well, and that is stay alive, and right now it’s batten down hatches,” Colas said. “Hit the sell button and get some liquidity. They see what’s coming and they want to be prepared to keep investing in the EV and ICE business.”

Whatever happens to Rivian, Ford and GM are likely to be around for a while, and in fact, guess who just bought GM for the first time: Ark Invest’s Cathie Wood.

This doesn’t mean Wood has necessarily soured on her favorite stock of all, top holding Tesla, but it does suggest a portfolio manager who may be acknowledging that not all stocks rebound on a similar timeline. ARK, whose flagship fund Ark Innovation, is down as much as the Nasdaq was peak to trough between 2000 and 2002, has some ground to make up.

“I don’t have a point of view on whether Cathie is a good or bad stock picker, but it was smart of her to look at a GM, not because it is a great stock ….I wouldn’t touch it here, but regardless, we know it will be around in 10 years aside from some cataclysmic bankruptcy,” Colas said. “I don’t know if Teladoc or Square will,” he added about a few of Wood’s top stock picks.

One big disconnect between many in the market and Wood right now is her conviction that the multi-year disruptive themes she bet heavily on are still in place and will be proven correct in the end. But buying a blue-chip like GM can help to extend the duration of that disruptive vision. GM, in a sense, is a second order stock buy “without having to bet the farm on the ones that are not profitable,” Colas said.

Even in a market that doesn’t love any stock, longer-term there are names to trust. After the Nasdaq bottomed in 2002, Amazon, Microsoft and Apple ended up being among the great trades of the 2002-2021 period.

Bear markets don’t end in a “V,” but rather an exhausted flat line that can last a long time, and stocks that do end up working don’t all work at the same time. GM might benefit before Tesla even if Tesla is at a $1.5 trillion three years from now. “That’s the value of a portfolio at different stages and there will be stuff you just get wrong,” Colas said.

The GM buy could be a signal that Wood will make more trades to diversity the duration in her funds, but investors will need to watch where she takes the portfolio in the next few months. And if it remains a conviction bet on the most disruptive, money-losing companies, “I like the QQQs,” Colas said. “We don’t know what will be in ARK, but we know what will be QQQs,” he said. “I would much rather own the QQQs,” Colas said, referring to the Nasdaq 100 ETF.

Even that has to come with a caveat right now. “I don’t know if big tech will be the comeback kids the same way it was, because valuations are so much higher,” Colas said. Microsoft is worth more than several sectors with the S&P 500 (real estate and utilities), and Amazon valued at over two Walmarts, “but you don’t have to be betting on Teladoc and Square,” he said.

“We knew they were good companies, and who knows where the stocks go, but fundamentals are sound and if you have to trust you’ve picked the next Apple and Amazon, that’s a hard trade,” he added.

Where Wall Street will still get more bearish

There are plenty of reasons in the macroeconomic lens to remain skeptical of any rally, from the Federal Reserve’s ability to manage inflation to the growth outlook in Europe and China, which all have a range of outcomes so wide that the market has to incorporate the possibility of a global recession to a greater extent than it normally would. But one key market data point where this isn’t being incorporated yet is earnings estimates for the S&P 500. “They are just too high, ridiculously too high,” Colas said.

The fact that the forward price-to-earnings ratios aren’t getting cheaper is telling investors that the market still has work to do in bringing numbers down. Currently, Wall Street is forecasting 10% sequential growth in earnings from the S&P 500, which, Colas said, doesn’t happen in this environment. “Not with 7%-9% inflation and 1%-2% GDP growth. The street is wrong, the numbers are wrong, and they have to come down.”