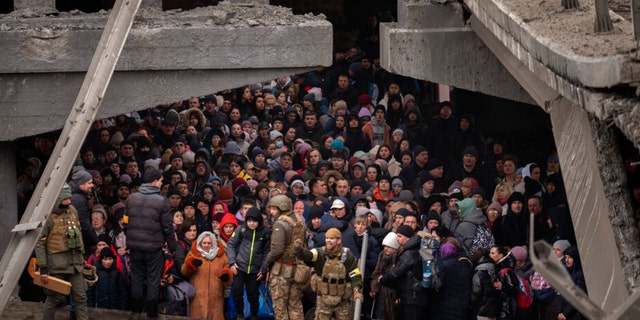 Laura Ingraham says the left believes America has too much – and it’s time to reset the American mind altogether.

Laura Ingraham said Tuesday that she no longer believes President Biden’s foreign policy blunders stem from incompetence, rather his policies are vindictive.

Biden tried to ricochet blame on skyrocketing gas prices from his administration by placing blame on Russian President Vladimir Putin and his assault on Ukraine. Amid a mostly bipartisan push, Biden banned imports of Russian oil.

Ukrainians crowd under a destroyed bridge as they try to flee crossing the Irpin river in the outskirts of Kyiv, Ukraine, March 5, 2022.
((AP Photo/Emilio Morenatti) )

“This is a step that we’re taking to inflict further pain on Putin. But there will be cost as well. Here in the United States … Defending freedom is going to cost. It’s going to cost us as well,” Biden said. “It’s simply not true that my administration or policies are holding back domestic energy production. That’s simply not true.”

“We’ve been doing nothing but paying for Biden’s and his party’s mistakes since he took power; from their insane COVID mandates to their willful denial of inflation to their maniacal crusade against fossil fuels. And now they’re bungling of U.S. foreign policy.”

When questiond by reporters one what he will do about the price of gas, Biden said, “Can’t do much right now, Russia’s responsible.”

“He decided to use the moment to do something that is disgustingly Washington [and] shift blame,” she said. According to Ingraham, Biden halting new drilling, issuing fewer permits, ditching the Alaska Oil project, suspending in ANWR, and canceling the Keystone XL Pipeline all played a big factor in crashing U.S. energy.

“We’re more dependent now on despotic regimes for energy than under Trump,” she said.

Russian President Vladimir Putin has signed into law legislation that could punish journalists with up to 15 years in prison for reporting so-called “fake” news about his military invasion of Ukraine.
(Yuri Kochetkov/Pool)

The “Ingraham Angle” host went on to accuse Biden of lying.

“Now this is just one of the many lies that Biden is telling Americans who are suffering under his weak leadership. There is nothing that a U.S. president, the most powerful country in the world. Nothing he can do about it. Nothing. It’s all in Putin’s hands. Are we all just imagining our previous energy independence under Trump [never happened]? Well, that’s what Biden wants you to believe.”

“Democrats never let a crisis go to waste. We know that. And the fact is Ukraine, just like the pandemic, is another tragedy for them to exploit in an attempt to save themselves in the midterms. Now you think the country is going in the wrong direction, pain at the pump? Well, all you need to know. It’s Russia’s fault.”

Previous articleZelenskyy is rallying ‘the world,’ Biden is leading from the ‘rear’: Rep. Michael Waltz
Next articleF1 Testing: All the track action in Bahrain live on Sky Sports F1 as teams look to assert dominance
- Advertisement -