Inside the enigmatic minds of animals 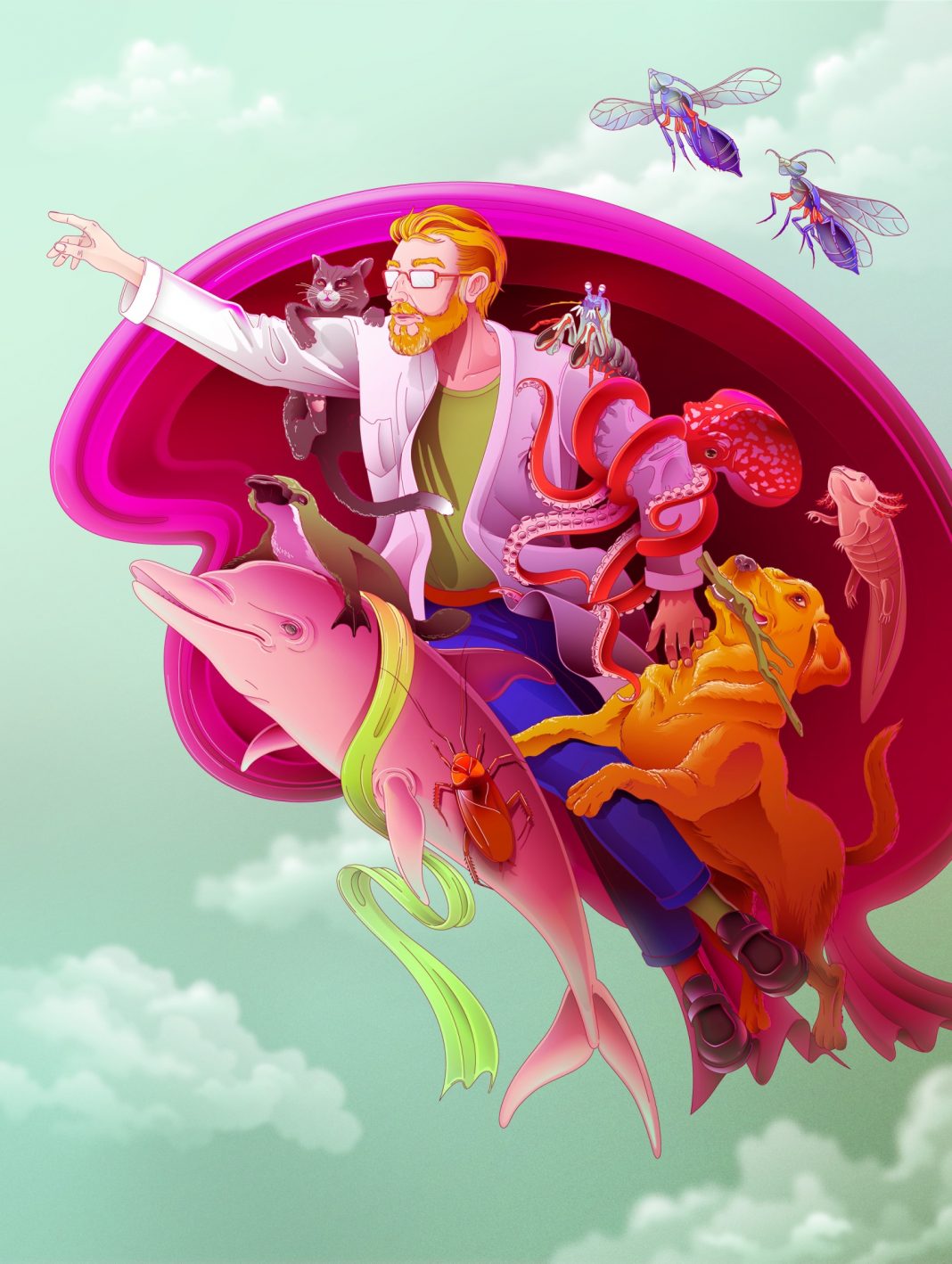 
In stating his ambition to “explore their senses to better understand their lives,” Yong is true to his word. A longtime staffer for the Atlantic, he has an Attenborough-like talent for excavating simple stories from the unbounded mess of the natural world. A look at the eyes of scallops, for example, becomes a window through which to marvel at the dozens or even hundreds of bobbling eyeballs attached to this seafood staple. Yong describes visiting bay scallops with eyes like “neon blueberries.” When threatened, the creatures flap furiously toward freedom, “opening and closing their shells like panicked castanets.”

An Immense World’s most revelatory anecdotes are those that reverse our worldview and help us to understand how evolutionary pressures have structured physical reality. He tells us that bees, like us, have trichromatic eyes—they perceive three primary colors. In their case, however, the light-sensitive cells are tuned to green, blue, and ultraviolet. “You might think that these pollinators evolved eyes that see flowers well, but that’s not what happened,” he writes. “Their style of trichromacy evolved hundreds of millions of years before the first flowers appeared, so the latter must have evolved to suit the former. Flowers evolved colors that ideally tickle insect eyes.”

Unlike Yong, Jackie Higgins sees animal talents as a lens onto our own faculties. Higgins, who was a science filmmaker for the BBC before becoming an author, centers each chapter of Sentient on one animal’s remarkable sensory adaptation but takes anecdotal diversions, à la Oliver Sacks, to explore cases on the edges of human capability. Taking cues from The Naked Ape—Desmond Morris’s hippie-era melding of zoology and ethnography that interpreted human behavior as the upshot of grand, speculative evolutionary narrative—she prizes the study of animals as “a mirror we can hold up to satisfy self-­obsession,” adding that “it offers another perspective on why we humans look, act and feel as we do.”

“We do not see with our eyes, but with our brains. Similarly, we do not solely hear with our ears, smell with our noses, taste with our tongues, or feel with the sensors in our fingers.”

There’s the peacock mantis shrimp, which has the most complex eyes so far discovered (with 12 types of photoreceptors to our three), and the star-nosed mole, which packs six times more touch sensors into its centimeter-wide splayed snout than you have in an entire hand. Each chapter spotlights one sense, so that in considering color vision, she pairs the example of the shrimp with those of humans grappling with their own equivalent sense: residents of the Pingelap Atoll, for example, the “island of the color-blind,” and an anonymous Englishwoman, code-named cDa29, who has a fourth type of photoreceptor that allows her to see millions of colors invisible to the rest of us.

In reading Higgins, we get to spend more time with an organ that appears deliberately unprobed by Yong: the brain. To her, the brain is everywhere, necessarily so as “our body’s all-important sense organ.” Paraphrasing the American neuroscientist Paul Bach-y-Rita, Higgins writes, “We do not see with our eyes, but with our brains. Similarly, we do not solely hear with our ears, smell with our noses, taste with our tongues, or feel with the sensors in our fingers.” In Sentient, we learn that spread across the human brain we can find a “sensory homunculus,” a touch map of the body with supersize areas corresponding to our hands and lips, reflecting the density of touch sensors in these zones. There are animal equivalents—“mouseunculus,” “raccoonunculus,” “platypunculus,” and star-nosed “moleunculus”—that likewise represent the primacy of those species’ sensitive whiskers and noses. Indeed, the most affecting sections of the book get closest to the mind, like the chapter on the skin’s “slow lane,” the touch system that responds to caress. The system is found in social mammals, including ourselves but also vampire bats, which have been observed gifting each other blood after caring licks. It is a rare sense that communicates not so much information as mood: “By tuning us to tenderness,” Higgins writes, “it transforms touch into interpersonal glue and the skin into a social organ.”

Through this, we learn that most of what makes up the perceptual world is constructed in the darkness of our head rather than in the sense organs themselves, whose role is limited to translating stimuli into electrical signals. Yet as Higgins and Yong conclude that we really can understand a lot about what it’s like to be another creature, we’re left wondering about this central organ, not having built a clear picture of any other species’ brain—its structure and functioning—nor elucidated much of what’s going on inside it: its cognition or thought. Enter Philip Ball’s The Book of Minds. For Ball, senses are just one way into a wide-horizoned exploration that begins with animal minds and cuts a course through consciousness, artificial intelligence, extraterrestrials, and free will. His book asks: What kinds of minds exist, or could exist, beyond our own? Ball, a prolific science writer and former editor at the journal Nature, also sets out with a story from Sacks, who recalled pressing his large, bearded face against the window to the enclosure of an orangutan mother at the Toronto Zoo. As each placed a hand against opposite sides of the pane, Sacks wrote, the two hairy primates shared an “instant, mutual recognition and sense of kinship.”

Even if it is unclear whether we can know what it is like to be a bat, it seemed obvious to Sacks that what it is like to be an orangutan is not just knowable, but something we can intuit readily. Ball’s exploration of the minds of others negotiates this path between solipsism—the skeptical philosophical position that none of us can know anything beyond our own mind—and anthropomorphism, which naively projects our own qualities onto nonhumans. According to him, humans, bats, and orangutans are just three instances within a “Space of Possible Minds” that could also include AI, aliens, and angels.